Need to catch up? Check out our previous Nashville recap here.

Underneath the rhinestones and cowboy hats and (in Scarlett’s case) layers upon layers of consignment-shop knitwear, we’re all just scared kids.

That’s the takeaway of this week’s Nashville, in which Scarlett plunges herself headfirst into the plight of the modern bullied teen. Spoiler alert: It hurts.

Also painful? Deacon’s life, which has started to normalize after Rayna’s abrupt death but which still makes him cry on the regular. Unfortunately for Deke, rugged man tears might as well be calorie-free rosé, so eagerly do Music City’s unattached females of a certain age lap them up. “You’re out of some novel or something,” Alyssa notes, and now all I can picture is a denim-clad Deacon standing on the cover of a Harlequin paperback, one boot up on the fender of a car or something, staring into the middle distance. Thing is, I can’t settle on a title. Cowboy, Take Me Away? The Claybourne Chronicles Book 1: Denim and Desire? I’m sure you all have far better ideas than I do, so feel free to shout ’em out in the comments.

Where were we? Oh yes: Read on for the highlights of “Ghost in This House.”

APOLOGY TOUR | Scarlett meets with Alyssa for a little image-rehab strategy session in light of her damaging interview with that witchy reporter, whose name is Mackenzie Rhodes. Scar mentions doing a benefit for one of her favorite causes, a women’s health clinic that provides free services, and Alyssa is on board. But she also thinks they can also do something a little more immediate to win back fans who are irked that Scarlett is carrying Damien’s kid.

So The Exes throw a secret concert for a small group of their fans. Afterward, Scarlett runs into Nadine, a teen she remembers from another event. “I signed your cast,” Scar says. But the girl is mad at her. “You’re a cheater, and you ruined everything,” Nadine says, really upset that Scarlett and Gunnar aren’t going to have a daughter they name Rayna and there’s something about a dog? and it quickly becomes clear that Nadine lives in her head a little too much. It ends badly.

This propels Scar into Mackenzie’s office, where she outright blames the reporter for outing her as a flawed, non-perfect person to her fans, which has therefore ruined their lives. Um, what? Look, I don’t like this Mackenzie person any more than you do, Scarlett, but I have to say, I agree with her when she’s like, “Stuff happens.” (OK, maybe you didn’t need the bitchy eyeroll to go with it, Mac.)

DOUBLING DOWN | Scarlett is so bothered by everything that’s going on, she finds Nadine via social media and meets with her so they can smooth things out. The teen sadly admits that if pretty, talented people like Scarlett and Gunnar can’t have perfect lives, what hope is there for kids like her? Later, when Gunnar tells Scarlett to take a step back, she responds, “I don’t think you know what it’s like, bein’ a girl.” On the contrary, honey: Those mood swings? That devotion to hair product? I defy you to name one Nashville dude who is more of a woman than Gunnar. He mumbles something about how boys get bullied, too, but Scarlett is already in the throes of forming her Big Idea.

She invites a bunch of her former fans — and Mackenzie — to a sit-down where they can talk about their feelings. It turns into a group therapy session in which the kids (and Scarlett and Gunnar) open up about how terribly other people have treated them and how it made them feel ashamed. And of course Mackenzie has a sad backstory about how other kids made her life hell when she spent a year in a body brace at age 14. She apologizes to Scarlett, then spins on her heel and leaves. (Side note: Anyone else think it was a little weird that she made that confession in front of all of those emotionally raw kids and then just ghosted?) 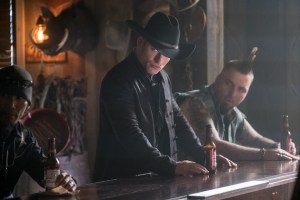 MEET ZACH’S EX | Will shoots his Budweiser commercial in New York, and it’s a success. But along the way, he runs into Jakob Fine — remember him? the fashion designer who wanted to, um, know to which side Will dresses, if you get my drift? — who insinuates that Zach isn’t quite the loyal puppy dog he pretends to be. And when Will finds a secret phone in his boyfriend’s bag, just as a cute guy named Jeff happens to be calling, he’s ticked off.

“Jeff is a guy who loves me!” Zach cries when pressed, explaining that they used to be together and that Jeff is “fragile,” which is why the zillionaire hasn’t fully pulled the plug and told him to stop calling. “The person I love is you,” Zach says to Will, and goes as far as calling Jeff and breaking up with him — on speaker! —  while Will listens, which leaves a bad taste in everyone’s mouth. “That was horrible,” Will says when it’s all over. “One day, you’re gonna do that to me.” Ouch. And, maybe, true.

TAG! YOUR TURN | Avery is no longer working with Hallie, and Juliette innocently asks if the change was because of her offering her thoughts on the matter. “You didn’t voice your opinion, you went insane,” he corrects her, adding, “I made that decision because things can only go one way with you: your way.” And later, when he’s had some time to think, he informs her that he’s going on a seven-week tour with his band because she’s completely healed and everything is fine and DADDY NEEDS NICE THINGS, TOO. She cries, then does that Juliette 180 she always does where she pretends that she’s 100 percent fine and never needed Avery in the first place. 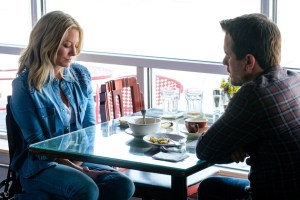 CROSSED SIGNALS | A simpering, distant acquaintance of Deacon’s accosts him with faux sympathy — and more than a little romantic interest — when he and the girls go out to dinner at Biscuit Love. (Side note: Would Biscuit Love be a good name for our Deacon-quin romance? Discuss.) Maddie and Daphne tease him that the interloper is “another woman interested in Dad,” but he laughs it off.

Later, at Zach’s insistence, Deacon meets with Jessie Caine — remember her? From the songwriters’ circle at The Bluebird a few weeks back? — to see if she might make a good Highway 65 artist. Deke is uninterested at first, but as they share their stories, the time just flies by. In a nutshell: Jessie stayed married too long to her bully of an ex-husband, who was awful to their son and who eventually married Jessie’s former assistant and best friend.

And then Deacon is talking about Rayna, and crying a little about Rayna, and the matter-of-fact way that both characters handle his unexpected tears (“It still happens sometimes”) is one of the more realistic touches I’ve seen on this show. Nicely done. Anyway, the meeting ends abruptly when he realizes he’s got to pick up one of the girls, so Jessie says she’ll send him her music, and he leaves.

There is zero hubba-hubba going on between them — as it should be! Rayna’s been dead for five minutes! — but when Alyssa asks Deacon to meet her later, she puts it into his head that Ms. Caine’s got a crush on him. It’s understandable, she adds: “You’re out of some novel or something: a handsome widower still married to his grief.” True, but I’m too busy being astounded by how H65’s super-savvy wunderkind hasn’t done even the cursory research that would tell her that Deacon is a recovering alcoholic. She orders him a martini, and he’s gracious about it, but if you’re trying to prove how you’ve got a handle on things, mama, this is not the way to go.

FAILURE TO LAUNCH | With Alyssa’s words in mind, and after Jessie calls to invite him to her show at Mercy Lounge, Deacon phones Jessie to make absolutely clear that he’s not looking for anything… and she’s insulted that he thought that her interest in him was anything other than professional. “I’m not looking for a relationship, at all, with anyone,” she huffs.

Perhaps because he feels badly, or maybe just to hear Jessie’s new stuff, Deacon winds up at Mercy Lounge for her set. She’s in the middle of a sad (and rather good) tune that talks about how she’s “still learning to lose you,” and it strikes a chord in Deacon, who gets a little teary again and leaves.