Two kinda unbelievable things happen in this week’s Nashville, and I’m still scratching my head over which is the more egregious.

One is that Juliette loses her damn mind in the time it would take an egg to go from over easy to over medium. And this is no “I’m flawed but lovable” stuff. We’re talking real, possible mental issues that are of a scarier flavor than her usual neuroses and jealousies

The other is that there are Scarlett and Gunnar cosplayers? I shouldn’t be surprised — honestly, at last year’s San Diego Comic-Con, I saw someone cosplaying as Kikkoman soy sauce — but… really?

While I’m pulling my grandma sweaters and pixie wig out of storage, let’s recap what happens in “Not Ready to Make Nice.”

SCARLETT: 0 SLEAZY JOURNOS: 2 | Scarlett and Gunnar are getting gas when he tosses out the idea of just getting in the car and driving far away. She points out that she tried that once, but he stopped her — nice callback, Nashville — but he won’t let the notion go. “No more tours, no more cameras,” he muses, and I understand that the 3.5 minutes of fame you’ve had must be incredibly taxing, Gunny, but good God, you’re no Johnny Cash. Simmer, please. They’re interrupted by Access Hollywood‘s Natalie Morales — who, in this episode, is given the unenviable role of gossip pariah — when she pops up on the gas pump’s screen and starts squawking about an exclusive paparazzi photo in which Scarlett’s baby bump is on prominent display. 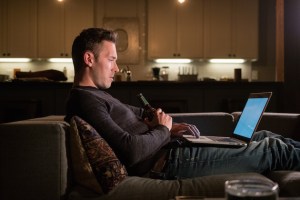 I call shenanigans — Access Hollywood would not give two hoots about these two! — but both of The Exes look pained, nevertheless. And it only gets worse when they get gently mobbed (cuddlemobbed?) by some overenthusiastic, well-wishing fans at a store. “What in the sam hill is a ‘shipper, anyway?” Gunnar asks later, when they’re at home and trawling the Internet. Oh Gunny, PULL UP A CHAIR AND PREPARE TO TAKE NOTES. The entire online community suddenly seems obsessed with the pair’s relationship and the (incorrect) idea that Scarlett is carrying Gunnar’s kid. She’s sad, but he encourages her to ignore all of it and focus on the good stuff.

But then Scar accidentally overshares with a journalist during a lunch interview, and the reporter — who claims she also hooked up with Damien — infers that Scarlett’s baby isn’t Gunnar’s. Scarlett freaks and runs out, the woman publishes the story (“Trouble in Scunnarville” is the hilarious headline), and pretty soon Scarlett is crying to Deacon about the whole thing. Oh, and she found out she’s having a girl.

“I need to be the mother she deserves to have, and I don’t think I am,” Scarlett sniffles to her uncle. (This was one of two places Nashville hit me with the sneak emotional attack this week. I’ll alert you to the other when we get there.) A happily tearful Deke assures her that she’ll do great. “Just love her. The rest will follow,” he says, all the while admitting that “My ineptitude as a parent has been made painfully clear.” 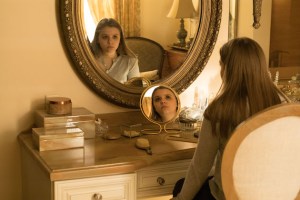 TEARS AND A TRUCE | And why might Deacon say that? Because Maddie finds out that Liv (and, kinda, Daphne) made the GIF of her on the night of the arrest, which causes her to angrily order Liv out of the house, which starts World War XIV between the sisters. There are two excellent aspects to this storyline: 1) Deacon’s evident frustration and fish-outta-water-ness when it comes to trying to bring about emotional equilibrium for two grieving adolescent girls, and 2) the scene where Maddie and Daphne apologize to each other and admit that they’re lost without Rayna around. “I just miss mom. Every day, every hour, I just want mom. And she’s not here,” Maddie says, crying. “I need you to help me figure things out, because I’m so confused.” Daphne hugs her, sobbing as she says, “I need you, too. I thought you were already gone.” Nice work here from both of the Stellas. (In case you were wondering, this was the ep’s second scene that nearly did me in.)

Deacon is pleasantly surprised when he comes home to find that the siblings are getting along again. Then they eat Chinese food and record a song together, as you do.

WARPED VIEW | I saved Juliette for last because I am still so baffled by what is happening in her storyline, and I thought maybe getting the rest of the recap out of the way first would clear my mind. Um, nope: What in the world is that girl thinking? First, she tries to railroad Hallie into releasing a single that, while a great song, is super poppy and not at all the roots music that reeled Deacon and Avery in last week at The Bluebird. Deacon says as much during a meeting, and when Avery backs him up (instead of an indignant Juliette), it seems to set more bad stuff in motion.

Pretty soon, Juliette is looking askance at every friendly interaction between Hallie (who’s been dumped by George, the Married Loser ™) and Avery. She catalogues every casual touch and knowing laugh. She watches All About Eve. And when she can’t contain the crazy anymore, she lashes out at Hallie just after the newbie artist records a different, more authentic-sounding demo at the studio.

“You’re not fooling anyone with your little Miss Innocent routine,” the blonde sneers. Avery is horrified as an angry Hallie leaves. “I’m literally worried about you at this moment,” he tells his wife. Dude, get in line.

Does Juliette actually believe that Hallie is an opportunistic famewhore who used Ju’s plane crash to her advantage? And if so, why did all of this manifest in this episode? I’m so confused.

Do you have any idea what’s going on in Juliette’s pretty little head? Were you not that sad when Liv turned down Daphne and Maddie’s offer to come back to the house? And would you ever dress up as The Exes for fun? Sound off in the comments!