Need to catch up? Check out previous Nashville recaps here.

There’s a brief yet fitting refrain that I found myself chanting at several points during this week’s Nashville: Girl, no.

When new Highway 65 marketing wunderkind Alyssa Greene makes a joke about writing songs about toilet paper in order to pay the bills: Girl, no.

When Hallie considers ditching her first recording contract because she’s in love with her shady guitar player: Girl, no.

When Juliette continues on this ridiculous path of stealing Maddie’s song: Girl, no!

When Maddie starts thinking of herself as a victim, however small, in Clay’s racially motivated traffic stop: Say it with me now — Girl, NO.

I was on vacation last week, but I’m back, and do we have stuff to talk about or what?! Read on for the highlights of “A Change Would Do You Good.”

NOT READY TO MAKE NICE | The video of Maddie has gone viral, with talking heads debating whether or not her speaking up when Clay got pulled over was beneficial or un-American. (The country music world, by the way, is pretty heavily tipped toward the latter.) A Nashville city councilman suggests that she apologize publicly, and Deacon’s inclined to agree, because he just wants the whole thing — including the abuse Maddie’s taking online — to go away. But Mads maintains she did nothing wrong and refuses to play along.

That feistiness earns her praise from Juliette (who has the nerve to run through the song she filched from the unwitting teen while Maddie is sitting right in front of her) and even more distance from Clay, who has become an unwilling participant in the media circus surrounding his non-girlfriend girlfriend. All of the unwanted attention sends him into a bad emotional place, one in which he doesn’t sleep, ignores his phone and manically makes music for hours on end. When Maddie finally shows up at his place, he tells her with certainty (and a significant amount of sadness) that whatever they had is over. “There was never a real place for us. We just couldn’t admit it,” he says, and she hugs him but doesn’t protest.

Back at home, she cries and apologizes to Deacon for all the trouble that she’s caused. Then she decides to put out her own apology, live-streaming a mea culpa for escalating the incident but refusing to say she’s sorry for standing up for Clay. Then She and Daphne — who’s the only one who knows that houseguest Liv posted a mean meme of Mads — sing a song to wrap up the broadcast. Elsewhere, Clay packs up his life and drives away.

Side note: Did it feel weird to anyone else that Maddie became the focus of the Clay-getting-pulled-over storyline? Granted, her actions seem very much in line with what an outspoken, somewhat dramatic girl of her age and upbringing would do in that situation. But a lot of time was spent talking about how many people were being mean to Maddie online, and not a lot of time was spent talking about how the troll treatment pales in comparison to what really matters: how people of color are often treated differently by law enforcement officials in America. If you’re gonna do social justice, Nashville, better to go all in, right? 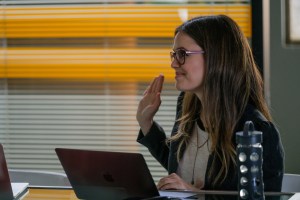 NEW GIRL | Meanwhile, at Highway 65, Zach introduces Deacon to Alyssa Greene (played by Rachel Bilson, [INSERT “WELCOME TO MUSIC CITY, BITCH!” OR “CHINO? EW” JOKE HERE]), a tech-savvy marketing person whom he calls a “go-to person when your company desperately needs to pivot.” She’s with the label as a tryout, but her first meeting with the musicians — Will, Juliette, Scarlett, Gunnar and Maddie, not to mention Deacon — gets off to a very rough start when she admits that she knows nothing about the music business. It goes even further south when she suggests brand partnerships, which the assembled artistes equate with shilling for mops and tires and such. There’s more, but I’ll just let Juliette’s face sum it all up: 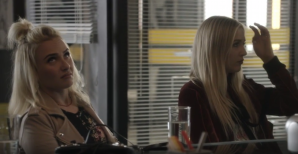 Later, though, when Alyssa sets up a meeting for Will to talk to Budweiser about a sponsorship of sorts, Zach’s boyfriend finds himself suddenly, excitedly on board with brand partnerships.

BACK, BACK, BACK AND FORTH | If I were to write a novella about tonight’s episode, I would title it: Scarlett and Gunnar: What are they even? Because the last I saw, he was telling her he wasn’t going to sit by and watch her weep over Damien’s exit. Now he’s cooking her candlelit dinners and caressing her face? Even weirder, as she confesses to a highly uncomfortable Deacon, she doesn’t really want to jump ol’ Gunny’s bones anymore. Deke calmly suggests that she wait it out, because feelings can change, and isn’t Gunnar a good guy for wanting to stand by her and raise some other man’s kid? And OH MY GOD I JUST REALIZED THAT DEACON IS ADVOCATING THAT SCARLETT PLAY THE RAYNA TO GUNNAR’S TEDDY. I’m sure that will work out just fine. 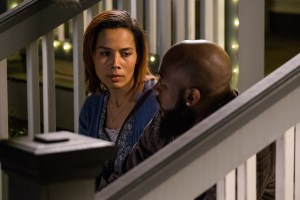 CHOOSE OR LOSE | Juliette sets up a showcase for Hallie at The Bluebird, and the newbie is barely three lines into her first song before Avery and Deacon are planning her entire first album in their heads. Deacon offers her a contract soon after, but she hesitates in accepting after Avery suggests that she record with “great” musicians instead of her usual band… which includes George, the guitarist she loves but who is married to and has kids with another woman. When Hallie balks, Avery asks for two hours of her time in the studio with musicians he picks. And when she sings with those guys, she can’t deny that it sounds amazing. (Side note: Speaking of which, holy heck, does Rhiannon Giddens have a gorgeous set of pipes or what?!) While nothing is decided for certain in this episode, George? I’d start packing.