The broadcast networks have nearly 20 shows debuting this fall, including the maiden space voyage of Fox’s Orville, NBC’s look at Brave heroes and ABC’s Ten Days with Kyra Sedgwick. To help you prep for it all, TVLine is offering First Impressions of the not-for-review pilots.

THE COMPETITION | NBC’s Sunday Night Football, Fox’s The Simpsons/Ghosted (new) and ABC’s To Tell the Truth

RELATED Read Our First Impressions of ABC’s Ten Days in the Valley, CBS’ S.W.A.T., The CW’s Dynasty, NBC’s The Brave and More

THE SET-UP | Piven stars as Jeffrey Tanner, a Silicon Valley titan who develops an information-sharing app, Sophe, through which he hopes the public can help ID his daughter’s killer. Jones plays Tommy Cavanaugh, the cop who originally investigated the seemingly solved murder, while Tena, Lee and Matthews form Sophe’s brilliant tech team.

THE FIRST IMPRESSION | Yes, this sounds an awful lot like Fox’s one-and-done APB, though to its credit Wisdom isn’t about golly-gee-whiz! gadgetry but the more emotional aspect of Tanner cashing out at the tech conglom he created to seek out some semblance of peace. As the trailer reveals, Sophe’s maiden voyage doesn’t so much crack the case at hand but solve a different string of crimes — to Tanner’s mild disappointment, but setting the stage for a weekly procedural. 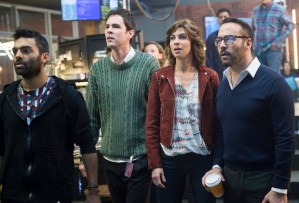 Piven’s in his element, playing a confident-but-flawed individual who thinks he has all the answers (but doesn’t), while Jones elevates the typically stock role of law enforcement support. (Will Cavanaugh always happen to work the case Sophie gets a lead on?) Elsewhere among the supporting cast, Tena and Matthews both pop, bringing a cool vibe as Sophe’s head engineer and a hacker who finds his way onto the payroll. Future episodes hopefully will flesh out Potter’s initially inert role as Tanner’s congresswoman ex.

P.S. Sophe’s “New Evidence” alert sound will bug you, hearing it a dozen times in an episode.

THE TVLINE BOTTOM LINE | Hey, there are worse Sunday time slots for a CBS drama to occupy.  Madam Secretary (which will now air at 10, in theory!) launched well and held up fine for three seasons as the leadoff program, which intermittently gets bumped 30 minutes (…or more). And like the Tea Leoni starrer, Wisdom of the Crowd brings with it a “name” lead and buzzy premise. It’s going to do just fine.

Watch the trailer for Wisdom of the Crowd, then vote in our poll below.