The broadcast networks have nearly 20 shows debuting this fall, including CBS’ S.W.A.T. reboot, the maiden space voyage of Fox’s Orville and The CW’s soapy new Dynasty. To help you prep for it all, TVLine is offering First Impressions of the not-for-review pilots.

RELATED Read Our First Impressions of ABC’s The Mayor and The Good Doctor, CBS’ S.W.A.T., SEAL Team and Young Sheldon, and The CW’s Valor and Dynasty

THE SET-UP | Sedgwick stars as Jane Sadler, a TV crime drama showrunner who finds life imitating art when her daughter is abducted in the middle of the night. Gurry costars as Jane’s embittered ex, while Christensen and Akinnuoye-Agbaje play her sister and the lead investigator, respectively.

THE FIRST IMPRESSION | This looks to be the real deal, folks, my favorite of the half-dozen drama pilots I have screened thus far. Penned by Rookie Blue creator Tassie Cameron and covering 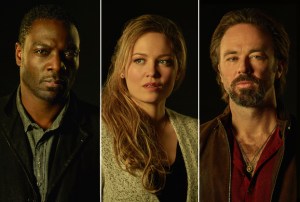 10 days over the course of as many episodes, the show takes its time in establishing a sense of dread as the child’s vanishing nears, and then does some interesting things with Jane’s immediate reaction once it does. The canvas is populated with an interesting variety of well-cast characters(/suspects?) from both Jane’s personal and professional lives — from the seemingly supportive to the mildly (or outwardly!) contentious. Most interestingly (and perhaps the show’s biggest obstacle, in establishing a root-for heroine), Jane is no Girl Scout. Rather, she has at least a couple of secrets brewing in the first hour alone, though she is far from alone in that respect.

THE TVLINE BOTTOM LINE | It’d be great to see Ten Days thrive in a time slot where other ABC dramas have struggled, but it will need to overcome a bit of a “disconnect” leading out of the network’s new Sunday reality-TV block of To Tell the Truth and Shark Tank (though the latter’s most recent run did average a robust-for-ABC 1.2 demo rating).

Watch the trailer for Ten Days in the Valley , then vote in our poll below.