The broadcast networks have nearly 20 shows debuting this fall, including David Boreanaz’s SEAL drama, the adventures of Fox’s Gifted mutants and ABC’s rapping Mayor. To help you prep for it all, TVLine is offering First Impressions of the not-for-review pilots. Next up on our list….

THE SET-UP | This ain’t your grandmother’s Dynasty! Except, well, it is, just with different actors.

THE FIRST IMPRESSION | I was among the TVLine staffers who cast side-eye at the trailer unveiled during Upfronts (embedded below), and yet the pilot as a whole is arguably better, if you accept the series for what it is — a contemporary reboot that shifts the setting from Denver to Atlanta and assigns new faces (and sometimes genders) to names made familiar by the classic 1980s sudser. We’re not creating a polio vaccine here. 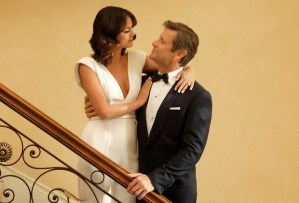 (Kelley) versus secretary Krystle Jennings. Fallon’s still banging Michael-the-chauffeur (Riley), brother Steven (Mackay) is still gay (though less “controversially” so, not being the ’80s and all) and Blake’s nubile fiancée remains drawn to blue-collar Matthew Blaisdell (Revenge‘s Nick Wechsler), who still has an off-kilter wife, Claudia (Brianna Brown). The biggest “twists” are that Cristal, while still hailing from hardscrabble roots, is now a young Latina, while the Colby family is African-American. Also, Cristal’s niece Sammy Jo is now hunky nephew Sammy “Call me Sam” Jo(siah), but he still is hot for Steven. No, there’s no Alexis yet — will the show be able to hold out until the freshman finale à la its forefather?

The cast is uniformly fine — Gillies and Kelley arrived ready to rumble — but several characters beg to be fleshed out, fast. (Steven, for one, starts off maddeningly vanilla.) The look of it all is “wealthy-ish,” though there is the sense that everyone is just playing dress-up; I feel like Fallon’s designer duds are wearing her, not vice versa. Lastly, if you’re looking for nods to the original soap, this Dynasty is here for you with an early scene that includes a rather clever nod to John Forsythe plus a callback to the old theme music.

THE TVLINE BOTTOM LINE | Having cut its teeth with Gossip Girl (whose creators shepherded this Dynasty),The CW hasn’t aimed for high soap since its previous reboot, Melrose Place in 2009. Having been fed a steady diet of superheroes, is its “Dare to Defy” audience ready to lather back up and mock the 1 percent? Paired with Riverdale (in a new Wednesday lineup) and airing opposite two old timers, one untested sophomore and a military newbie, the opportunity is there to find out.

Watch a trailer for The CW’s Dynasty, then vote in our poll below.