The broadcast networks have nearly 20 shows debuting this fall, including CBS’ S.W.A.T. reboot, the maiden space voyage of Fox’s Orville and The CW’s soapy new Dynasty. To help you prep for it all, TVLine is offering First Impressions of the not-for-review pilots.

THE COMPETITION | CBS’ Scorpion and ABC’s The Good Doctor (new)

RELATED Read Our First Impressions of ABC’s Ten Days in the Valley, CBS’ S.W.A.T., The CW’s Dynasty and More

THE SET-UP | Vogel leads a Special Ops team (comprised of Grosse, Karam, Mills and Tabbal), while Heche calls the shots from D.C.

THE FIRST IMPRESSION | You had to twist my arm to press play on this one; after watching SEAL Team, Valor and S.W.A.T. in quick succession, I had OD’d on Elite People Doing Elite Things. (I may have even told Andy Swift at one point to keep his head on a swivel and watch my six. Copy that!) But I must say, The Brave (fka For God and Country) is well-produced, the tactical operations are clever and the cast is impressively diverse 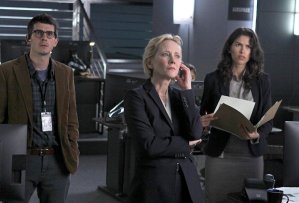 in a way that makes their opening undercover maneuvers in Syria rather believable. (Conversely, see Michael Scofield and “Whip” scampering around Yemen completely unchecked.)

Among the ensemble, Vogel has a role that suits him to a tee, Grosse I find to be always engaging and Karam (as a plucky sniper named “Jaz”) is a real find. What’s interesting here is that the cast is poised to always be geographically divided, with Heche (whose DIA honcho suffered a Recent Personal Tragedy, we are repeatedly reminded), Pernas and Ellington manning the strategic ops hub while the others trot the globe. Oh, one last thing: the pilot has the strangest ending.

THE TVLINE BOTTOM LINE | Can The Brave steal eyeballs from those who appreciate Scorpion‘s derring-do but have grown weary of its cartooniness? With ABC also trying out a newbie, many viewers are up for grabs, though The Brave may be missing the “noisy hook” that helped time slot predecessors Revolution (the lights went out!), The Blacklist (James Spader!), Blindspot (naked in a duffel!) and Timeless (time travel!) get out of the gate — especially in a fall season that is well-armed with military dramas.

Watch the trailer for The Brave, then vote in our poll below.