Remember that part in the movie Speed when Keanu Reeves’ character accidentally jabs a screwdriver into the zooming bus’ gas tank, making a dire situation (“Keep it above 50!” or a bomb explodes) that much worse for himself and everyone unfortunate enough to be in his immediate vicinity?

“What, you thought you needed another challenge or something?” Sandra Bullock’s Annie yells at him from the driver’s seat.

I had a similar reaction to this week’s Power, in which Tommy decides that the best way to handle Bailey Markham — who has that incriminating recording on which Tommy admits to killing Lobos — is to stab the man to death at Proctor’s place. Good god, man, things were precarious enough before you went insane on the guy, and now you’ve killed a federal agent.

There’s no way Tommy could have known that Markham has been telling anyone who’ll listen that he has proof that Greg was clean. There’s also no way Tommy could have known that various members of the prosecution are aware that there’s some kind of evidence that might exonerate Knox. But he should know that violently offing a Homeland Security agent on the fly doesn’t just ensure that Proctor is “in it together” with him, it is nearly certain to draw even more attention to their already incredibly shady situation.

Anyway, elsewhere in the episode:

* Tommy delivers the money to Tony’s wife, and the man who’s there with her is an associate of Tony’s named Sammy who recognizes Tommy and then makes a call alerting Tony that “it’s him.” Those of you who adamantly prophesied that the old man is Tommy’s dad, I’m starting to feel you.

* Mak reinstates Angela on the prosecution’s team, chews her out for offering Ghost an unauthorized deal, then hands her a nightmare assignment: Get Tasha to flip on James. So the two women meet, and Angie lets Mrs. St. Patrick know that Ghost turned down a deal that would’ve protected her and the kids. This is news to Tasha, who tries to fake like she knew but who promptly marches to the prison and lets her husband know that he. will. be. keeping. her. in. the. loop. from. now. on. (Side note: I love Lela Loren and Naturi Naughton in scenes together. More of that, please.) 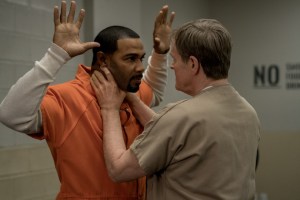 * Based on intel gleaned during Tommy’s visit to Tony’s wife and Sammy, Ghost lets Tony know that he’s got information that can mess with Tony… and after a little bit of a standoff, they agree to detente. No more payments in exchange for Ghost’s silence.

* The judge gets wind that Proctor is lawyer to both Ghost and Tommy, and he deems it a troubling conflict of interest. Long story short? Silver is now Ghost’s only legal counsel.

* Tommy and LaKeisha have vigorous sex in one of the chairs at her salon. I just thought that should be noted somewhere.