Need to catch up? Check out our previous Power recap here.

Members of Ghost’s entourage start to squirm, exhibiting varying degrees of worry, when the Feds start hauling them in for questioning in this week’s Power. (Can you guess who’s the weakest link?)

Meanwhile, Ghost and his legal team nab a serious win, thanks to some shady/arrogant work on the part of the Assistant United States Attorney’s Office. But it might not matter all that much, given that a fellow inmate susses out James’ true identity based on a hunch and one phone call. Way to lay low there, St. Patrick.

Read on for the highlights of “The Kind of Man You Are.” 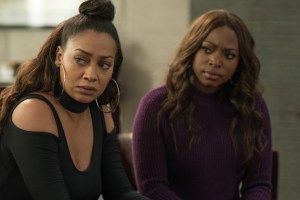 SNITCHES GET STITCHES | Dre, Julio and LaKeisha are brought in to talk to the prosecution’s team. The first two play it very cool, saying they know nothing about any illegal dealings and painting a portrait of James St. Patrick as a neighborhood savior who pulls troubled young men onto the straight and narrow. LaKeisha, however, is very nervous as Angela asks her about Ghost and Tasha’s marriage, and those nerves manifest as testiness. Well, that, and she’s being questioned by her best friend’s husband’s mistress.

Later, Keisha worries that she said something wrong, and Proctor assures her that she probably didn’t… but then he begins to think that the Feds are going to argue that since Ghost and Tasha weren’t really functioning like a marital unit, Tasha doesn’t deserve spousal privilege (aka they want to compel her to testify against her husband). When Keisha privately freaks that Tasha would turn on anyone in order to protect her kids — who would go into foster care if/when she refused to testify and was therefore sent to jail — Tommy reassures her that won’t happen. Meanwhile, Mak is totally going to try to do that, calling Ghost and Tasha’s children “collateral damage” in the fight to get justice for Greg.

“EVERYONE GETS WHAT THEY DESERVE” | On a related note, Bailey Markham — remember him? Greg’s mentor, with the hair? — sees Angela at Greg’s funeral and gets mad all over again, because he thinks Angela was the Lobos mole. When he visits her and she says she’d do anything to get justice for Knox, Markham asks her to confess to being the mole. If she does, he promises to testify that Greg was trying to nail both her and St. Patrick. That way, she’ll go to jail, Ghost will die and Greg will be exonerated. Or, as Bailey puts it, “Everyone gets what they deserve.”

And Angela tries to get Ghost to comply, asking him to confess to killing Greg and to give up Tommy for the Lobos murder, saying she’ll get his sentence reduced as much as she can in return. He refuses, once more stating his innocence and his focus on his family. “We both know when you want something, your family doesn’t matter. No one matters but you,” she says, coldly, reminding him and his lawyers that the offer is still on the table — for now.

Did I say lawyers, plural? Yep. Proctor brings Terry Silver in as second chair counsel; he’s got a good success rate when it comes to cases like Ghost’s. He seems like a good guy, and he totally has Ghost’s number, but I’m less impressed with him (and Proctor) when it’s Ghost that points out a discrepancy in the crime scene photos: He notices a phone in the pictures that wasn’t there when he broke into Greg’s place, and he can recognize it as the same phone he saw when he was trying to help Angela find the Lobos mole.

“Whoever killed him must’ve left that phone to frame him,” Ghost theorizes. “It worked,” Proctor says.

IT’S ALL COMING BACK TO ME NOW | Later, Ghost finally remembers that Greg pulled him over and roughed him up a little the night of the murder, and that has to be when Knox’s DNA got under his nails. There’s no official record of the stop, but Angela knows it happened. And when Proctor and Silver produce traffic-camera footage of the incident in court, and Mak has to admit that Angela mentioned it to him but he didn’t pursue it, the judge throws out the DNA evidence.

It’s a huge success for Ghost’s side, but Silver carries no illusions about how bad things really are. He’s also not psyched to learn that Proctor is also Tommy’s lawyer, which seems like a clear conflict of interest.

“If James… is really your client, tell him to turn on Egan or walk away,” Silver advises his colleague.

Elsewhere, a chagrined Mak officially brings Angela back onto the prosecution. “I almost forgot why you’re the most valuable person on this team,” he says. “That’s right,” she replies, almost visibly stifling the urge to slap his smug face, “I am.” 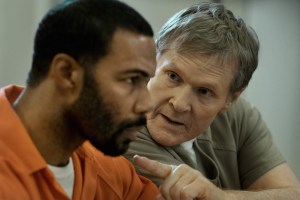 PAST IMPERFECT | On the other side of the prison bars, old guy inmate Tony gets confirmation that St. Patrick is Ghost, then promptly proceeds to shake him down for cash. The deal: Frequent $20,000 payments, hand-delivered by Tommy, or Tony will tell the AUSAs everything he knows. Ghost is not happy… but he has Proctor set up the blackmail payouts anyway.

Also good to know: Tariq helps Kanan break into the posh apartment of that douchey blonde classmate who keeps giving the St. Patrick kids trouble… The tabloids run a big photo of Raina crying, but Ghost tells her that “nobody can kill your daddy”… Julio tells Dre to stop selling drugs in the clubs, thanks to law enforcement’s increased scrutiny, but Dre keeps doing it (because somebody’s gotta pay Kanan, right?)… and Markham also meets with Sandoval, who shows a LOT of interest in some inadmissible evidence that the Homeland Security agent says he has. (He’s totally going to kill him, too, isn’t he?)