In the wake of last week‘s Daniel-centric Fear the Walking Dead, Sunday’s installment accelerated almost all of the series’ plots, revealing whether Madison could really handle maniacal mama’s boy Troy as well as she insisted she could, bringing Nick and Luciana, as well as Jake and Alicia, to turning points in their relationships, dropping Strand into a predicament that was arguably as dire as his near-execution by Dante, and introducing a whole new threat. Was it the high-profile heavy we’d been anticipating? Read on and find out…

‘LET IT BURN’ | Remember the old couple that Nick watched dance in “Teotwawki”? “Burning in Water, Drowning in Flame” began with the husband waking up in the night to discover that his wife had died and turned. Tragicomically, she couldn’t bite him, as she’d gone to bed with her dentures out, so they shared an awkward last dance before he shot them both in the head. As if that wasn’t sad enough, when their bodies fell, they knocked over a lantern, which set ablaze the house — Jeremiah’s before wife No. 2 had demanded something fancier. The following morning, Madison set off with Troy and a group of volunteers (including Coop and Mike) to find out why Outpost Alpha had gone silent. The psycho “won’t hurt me,” she assured her kids. He even insisted that she ride shotgun with him.

At breakfast, Jake playfully teased Alicia, who was worse for wear after a long night of “Bible study.” She was so out of it, in fact, that she didn’t even let him finish a sentence that started with “I’m happy you’re… ” Only after he’d moved off did she learn from Gretchen that the geezer killed in the fire had been, along with Jeremiah, her dad and Outpost Alpha’s Phil, one of the first four at the ranch and, therefore, someone important to Jake. When she sought him out to apologize, she finally let him finish the sentence he’d begun earlier, and of course, what he was happy about was that she was there. After the two had sex — called it, BTW — he tried to give her a copy of the book of Bukowski poems from which the episode derived its title. However, she wasn’t interested. She used to like art and stuff, she said. “But now, what’s the point?” Hoping to restore her lust for life, he escorted her to a lovely pond and insisted that, even in that dark world, “there are shards of light — you just need to look for them.” Eventually, Alicia took a flying leap off a cliff into the pond, which in this sort of apocalyptic situation seemed to be the best therapy she was going to find. 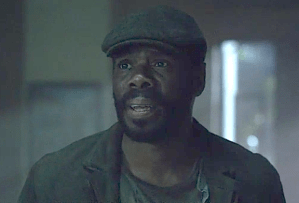 ‘EVERY HOME NEEDS A GUN’ | When Luciana heard from Nick the deceased couple’s love story, she declared it “sad but beautiful.” However, she was mainly interested in getting the hell off that ranch. “We can’t just walk to Tijuana without a plan,” he argued. Well, she couldn’t live there, she countered. And although he promised he wouldn’t make her stay, she was rightly doubtful. Later, Nick impressed Jeremiah by taking it upon himself to try to clean up the ruins of the seniors’ home, and over the course of their afternoon working side by side, they did some of that weird bonding that seems to be the Otto patriarch’s specialty. (Among the “fun” topics: Nick’s dead dad, how awesomely awesome Jeremiah thinks guns are, and how the alcoholic only sobered up after nearly shooting off his pecker.) When Luci passed by, Nick admitted that she thought the monsters at the ranch were worse than the ones outside. Then she should go, Jeremiah said matter-of-factly. “‘Cause she’s brown?” Nick asked. No, Papa Otto replied, “’cause she can’t get right with what happened… Can you?” That night, Nick surprised Luci with a candlelight picnic in the ruins and suggested that “with the right work, this place could be great.” In response, she gave him what, being the dreadful reader of people he is, he didn’t realize was a goodbye kiss. By morning, she was gone. (As a consolation prize, Jeremiah gave Nick the dead man’s pistol.)

Meanwhile, Strand and Daniel were getting about a dozen heated exchanges to a gallon as they road-tripped back to the hotel where (yeah, right) Ofelia was waiting for her father. By and by, Victor tried to prepare Daniel for the “faint” possibility that Ofelia had moved on since last he’d been there. He added that he wasn’t the same man now that Daniel had known — and so disliked — aboard the Abigail. Good, Daniel replied, because Strand oughta know what he’d do to that man. Finally having had it — and rightly anticipating how badly this was going to go once Daniel learned that Ofelia was long gone — Strand told him that if he wanted to play the heavy, fine, do it, just kill him right then and there. But of course, Strand being the show’s most intriguing character (or maybe No. 2 as we get to know Daniel better), he was not murdered on the spot. When at last they arrived at the hotel, Strand was surprised to see that there were no guards at the gate. Never a good omen. Inside the seemingly abandoned place, Daniel horrified Victor by ringing the bell to draw walkers. Only then did Daniel demand to know where Ofelia was. When finally Strand confessed that she’d run off with his truck, Daniel left him there to fend off the walkers, saying, “Let’s see how you get out of this one.” The deadly barber even stole Strand’s speedster! When last we saw Victor, he’d survived the initial attack and was running off into the night. 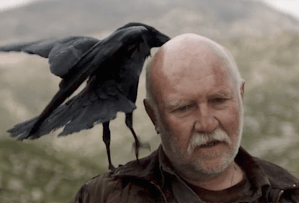 ‘TELL YOUR PEOPLE IT’S TIME FOR JUSTICE’ | Headed for Outpost Alpha, Madison, Troy & Co. spotted a bunch of walkers who’d emerged from a prison bus. (Because what could be worse than walkers but criminal walkers?) Though taking care of them wasn’t on the to-do list, Madison sided with Troy that the zombies should be dispatched, lest they migrate toward the ranch. Naturally, Troy took to the re-killing of the undead with disturbing enthusiasm, even going so far as to turn one of them into Monty Python’s post-fight Black Knight. Later, the group found the spot where the chopper had been shot down… only the chopper had been hauled away. And there were signs that Phil had had a shootout there with someone. At Outpost Alpha… oh dear, everyone was dead and had been burned. Scratch that — everyone was dead except for Phil, who was sitting off at a distance, babbling with a crow on his shoulder. Ah, OK, he was pretty much dead, too — the crow was actually eating the brain out of his busted-open skull. After Madison put him out of his misery, it was (past) time to skedaddle. “But you only just got here,” said Walker, a Native American whose men had the ranch contingent surrounded.

While threats flew left and right, in the end, Troy & Co. really had no choice but to surrender their guns, their supplies, even their boots before being sent back to the ranch with a message: Walker and his tribe were reclaiming the land on which the ranch was built. Vamoose… or else! Trudging back on bloody feet, Madison intervened when Troy refused to let his men rest. “Being a leader,” she told him, “is knowing when to stop.” Needless to say, he didn’t take it well, prompting Maddie to play a dangerous maternal mind game in hopes of manipulating him. It worked in that Troy allowed them to break until dawn. But it also worked disastrously in that Maddie was awakened in the night by Troy holding a knife to her throat. He didn’t use it, so maybe she was right — he wouldn’t hurt her. But it sure was disturbing. Possibly even creepier? The fact that Mike had apparently been awake and watching the whole scene.

So, thoughts? Are you hoping for a Strandcentric episode now that he’s separated from everybody? Do you like Alicia (any better) with Jake? Are we all assuming Maddie will ultimately kill Troy? Hit the comments.