If last week’s Fear the Walking Dead left you with questions about Daniel’s resurrection, fear, er… not: Sunday’s installment went out of its way to address everything from how he managed to survive the fire he started at Thomas’ estate to why he wound up working for water monger Dante and what he intended to do with old frenemy Strand. What was that, exactly? Read on…

‘I’M THE FIFTH BEATLE’ | Early on in “100,” Daniel — hobbling on an injured leg and so fresh from that Season 2 blaze that he had to smell like barbecue to walkers — was saved by a kindly stranger named Efrain who had for him good news and bad news. The good: He knew of a fountain from which water began to flow at 5pm daily. In other words, “a little miracle.” The bad: Daniel was gonna have to walk to reach it. But walk, he did, and after the new pals had a drink together, so to speak, Efrain pedaled through Tijuana with Daniel riding shotgun (as best he could on a bicycle) while a boombox announced to the thirsty “Agua! Agua!” No sooner had they met up with Efrain’s friends (family?) than Daniel collapsed in agony, and they all hid from some dangerous-looking hombres who we later learned worked for Dante. Once safely behind closed doors with the group, Efrain’s friend Lola instructed Daniel to try not to scream as she — ay caramba! — sliced the burned skin from his leg! He’d managed to fight his way out of both his Season 2 mental state and the blaze to which it had led, but clearly, he was in no danger of running out of… let’s call them difficulties.

Later, Daniel thanked Efrain for rescuing him by giving the shaggy Good Samaritan his first professional haircut in (what clearly had been) ages. Since they were becoming closer by the minute, Efrain felt free to suggest to Daniel that something about him was rotting besides his leg. In response, Daniel admitted that while serving on a death squad in El Salvador, he’d killed 96 people. (And, as the episode’s title suggested, that number would grow by the end of the hour.) That wasn’t what weighed on Daniel, however, Efrain could tell. So Daniel confessed that he’d kept his past a secret from Ofelia, the daughter he now was afraid he’d burned alive. Would Efrain offer him forgiveness the way he did the walkers they dispatched? Again, he had good news and bad news for Daniel. The good: “There’s nobody left in this world to judge you.” And the bad? Before Efrain could reveal it, he drifted into a drunken sleep. Stealing into the night to resume his search for Ofelia, Daniel fought off one walker, then appeared ready to sacrifice himself to another. He was even on his knees saying a Hail Mary when… lightning struck the walker! 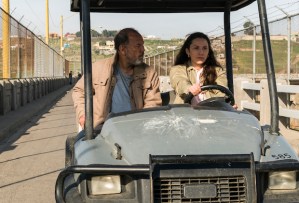 ‘YOU’RE PICKING A FIGHT WITH A KILLER’ | Eventually, Daniel was discovered by a couple of Dante’s men — janitors tasked with clearing away walker carcasses, lest they infect his water supply — and taken to the head of water treatment… Lola! Escorting Daniel to the Gonzales Dam, which thanks to gas-powered generators was almost fully functional, Lola explained that when Tijuana had fallen, its municipal president, Dante, had taken control and begun distributing H20 “his way.” Security head J.C. was immediately suspicious of Daniel, but Lola nonetheless managed to put him safely to work as a janitor. For about a hot minute, anyway. In the cafeteria, all of Dante’s men stood when el jefe passed through… except, of course, Daniel. This defiance so perturbed J.C. that he stuck his finger in Daniel’s Spam like a bully from a 1980s teen movie. Their ensuing dust-up drew the boss’ attention, and in no time at all, he’d deduced that the newcomer had been sombra negra in El Salvador.

‘THIS MAY BE THE APOCALYPSE, BUT IT’S NOT COMMUNISM’ | Newly impressed by Daniel’s credentials, Dante agreed to loan him a jeep (the better to search for Ofelia) — so long as the “officer” would help him deal with water thieves. “What matters here,” said Dante, sounding an awful lot like a better-dressed Negan with an accent, “is guaranteeing order.” Next thing we knew, Daniel was in Tijuana with Dante’s men, and as the clock neared 5pm, they discovered Efrain’s fountain. Desperate to protect his friend and his miracle water, Daniel distracted his new “colleagues” by pressing PLAY on the boombox. (“Agua!”) Back at HQ, Lola was anything but grateful for what Daniel had done. In fact, when he warned her that if she and Efrain didn’t stop running water, they’d end up dead, she spat back, “This place is perfect for you. You are a thug.” 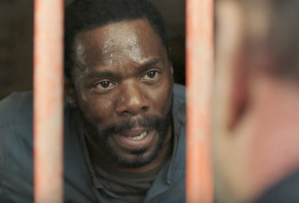 Off that exchange, Daniel spotted Strand arriving and, as we saw in “Teotwawki,” paid him a visit at his cell. Victor, hoping to be freed, told Daniel what he thought he wanted to hear: that Ofelia was alive and well, and waiting for him at the Rosarito Hotel. Um, waiting? Knowing that his disillusioned daughter wouldn’t do that, Daniel jumped to the conclusion that Ofelia was dead. On the plus side, “this place is perfect for you,” he told Victor, recycling Lola’s dis. As Strand desperately reminded Daniel that he’d once saved both Daniel and Ofelia’s lives, his “guardian angel” was called away to see Dante, who… oh dear. The boss had in custody Efrain and wanted Daniel to torture him into talking.

‘THOSE OPTIONS AREN’T OPTIONS, BROTHER’ | Whispering, Daniel told Efrain that if he talked, they’d kill him, then Lola; if he didn’t, Daniel would kill him, but at least he’d do so as quickly as he could. “Forgive me?” Daniel asked. “Again?” Efrain replied. As Lola looked on in horror, Daniel, his heart clearly breaking, began to beat his savior to a pulp. After a few blows, he tried to convince Dante that the prisoner wasn’t going to talk. Nice try, but no dice. Finally, just as Daniel approached Efrain with a hammer, Lola intervened, exposing their connection. From there, it was back to the balcony, with Strand now along as a spectator. First, Dante tossed over the side a janitor as a “messenger pigeon,” then Daniel was to throw Lola to her death. Only, instead of doing so, he shot J.C. and Dante, and saved Lola and Efrain. Afterwards, he asked for Lola’s forgiveness, and in a moment so loaded, it actually gave me a shiver, she offered him her hand.

So, what did you think of “100”? Sorry to see a villain as merciless as Dante taken out so fast? Relieved Daniel didn’t have to go (completely) dark again? Hit the comments.