Those of you who have been voicing your displeasure with Fear the Walking Dead in the comments section might have been especially pleased by this week’s midseason finale: What transpired basically turned the whole show upside-down, cutting old ties and simultaneously knotting new ones. Plus, one character went full-on Rick Grimes on an adversary. Who? Read on and find out!

‘THIS IS THE END OF DEATH ITSELF’ | Early on in “Shiva,” Celia was lighting into Strand for shooting Thomas in the head rather than joining him in death, as planned. “You love no one,” she spat, adding a slap for good measure. Though Madison tried to intervene, Celia wasn’t having any. “The sun comes down, I want you gone,” she said. “All of you.” Hoping to pacify Celia, Nick bloodied himself up, went out and retrieved a zombified Luis. “What you see is my son,” she insisted. “Changed, yes, but no less my son.” And somehow, that was, in fact, what Nick saw. So Celia decided that he and he alone belonged there. What about his family? he asked. OK, they can stay, too, Celia said. But not Victor.

Naturally, Madison was ticked about Nick’s latest death-defying stunt. But he couldn’t understand why she couldn’t understand a mother wanting her son back. (Perhaps he didn’t get a good whiff of Zombie Luis?) At an impasse, he volunteered to go out again and come back with Travis. Off that argument, Maddie appealed to Strand to save Nick from Celia’s dangerous influence. Victor turned down her request — and pointed out that they weren’t friends, just two people who’d had a “useful arrangement.” Yet it was still clear that they had bonded. When she asked where he’d go when he was kicked out, he told her he’d head for the boat. “If there [still] is a boat,” he added. “You interested?” Alas, she couldn’t leave without Travis. 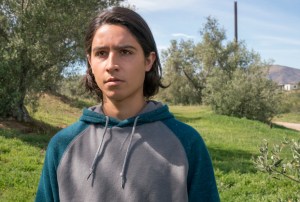 ‘LOOK AT ME! I’M NO GOOD!’ | Speaking of whom… Out looking for Chris, Travis — his feet bloody since he’d left the hacienda in such a hurry, he hadn’t even grabbed shoes — came upon a house whose occupant offered him water and a pair of sneakers. But when the man lied about having seen Chris and tried to hustle Travis out, he deduced that there was someone hiding in the other room. Whad’ya know? It was Chris, holding the poor man’s little boy hostage! After Travis disarmed his son and saved the youngster, he tried to impress upon Chris that he wasn’t a monster. “You sure about that?” the teen replied. And, considering that he’d just held a gun on and tried to stab his dad, it seemed a valid question. Later, Nick tracked down Travis, who told him that Chris couldn’t come back, not in his current state. So Travis wanted Nick to go back and tell Maddie that he’d never found them.

‘THEY HATE YOU FOR YOUR SILENCE’ | Meanwhile, nightmare-plagued Daniel was quickly coming unglued. At one point, his delirium became so obvious — he tried to drag Ofelia off to see her late mother — that some of Celia’s men intervened, and he attacked them with a razor. Once in custody, Celia challenged the barber to confess his sins. “I have nothing to tell you,” he insisted. However, he had plenty to discuss with Griselda. When his ill-fated wife materialized before his eyes, she reminded him that there was one sin he’d never confessed even to her — his first, when he was just a boy being recruited by the junta. After being forced to remember, Daniel — egged on by his missus’ apparition — escaped from the chair to which he was tied, filled the room with gasoline and dropped a match. (Adios, Daniel.)

‘WHAT WOULDN’T YOU DO FOR YOUR CHILDREN?’ | When Celia ordered Strand out after Thomas’ funeral, Madison pleaded her non-friend’s case when maybe she should’ve been pleading her own. Celia noted that Madison was only being allowed to stay because of Nick, and if she didn’t get with the program, Nick might change his mind about that. In response, Madison said that she did want to understand Celia’s perspective, so the older woman took her to the cellar and asked a series of questions along the lines of, “If your child was hungry, would you not feed him?” Unfortunately for the madwoman, there was nothing Madison wouldn’t do for her kids — including locking Celia in with the zombies. (Adios, Celia.)

‘WE DESTROY EVERYTHING’ | As night fell, Strand made his exit, cracking, “Don’t worry about me. I’ll hail a cab.” (Curiously, somewhere along the line, Alicia forgot that she and Victor had an antagonistic relationship.) When Daniel and the whole compound went up in flames a la Hershel’s barn, Victor turned around in his truck and picked up Madison, Alicia and Ofelia. Just then, Nick returned from his “unsuccessful” mission and wanted to know where Celia was. When his mom replied only that they had to get back to the boat, the junkie reeled. Celia “was right about us,” he said. “She knew what we are” — the real monsters. As such, he turned away from his mom and sister and ran the other way.

What did you think of the midseason finale? Grade it below, then hit the comments. Did Madison score any points with you by feeding Celia to her “children”?