Warning: The following contains spoilers for the Season 3 premiere of Fear the Walking Dead.

The never-saw-it-coming death in Sunday’s Season 3 premiere of Fear the Walking Dead “was meant to feel like a kick in the balls,” showrunner Dave Erickson tells TVLine. Mission accomplished. But, before the EP explains why Travis had to die, a quick recap of the double header…

In “Eye of the Beholder,” Madison at last was reunited with Nick, and, after getting a handle on survivalist Jeremiah Otto’s sons, good guy Jake (The Following’s Sam Underwood) and sick f— Troy (Teen Wolf’s Daniel Sharman), everybody said a tense, momentary “Bygones!” about their previous, near-lethal interactions and headed for the Ottos’ ranch. En route with Jake, godsister Charlie, Alicia and an unconscious Luciana in Episode 2, “The New Frontier,” Travis was shot in the neck when an unknown someone — our guess — opened fire down below, and leapt from the helicopter to avoid endangering his traveling companions by turning in mid-air. By the time Alicia and Jake made it to the ranch with Luci, Charlie was walker food, and it was a toss-up as to whether Maddie or Jeremiah (Deadwood’s Dayton Callie) had a bigger hate-on for the other. Meanwhile, Strand got himself banished from the hotel by Elena and Hector for calming the masses by pretending to be a doctor — but not before being made to bear witness to Ilene’s suicide. Now then…

TVLINE | Talk me through the decision to kill off Travis.
Following Chris’ death, I think [his father’s] death was inevitable. Travis’ whole trajectory at that point was to do for his surrogate son what he’d failed to do for his biological one. Coming off of Chris’ death, Travis had failed. He’d broken his promise to Liza — he hadn’t protected their boy. So for him, it becomes very much a question of atonement and redemption. And the only way to do that is to return Nick to Madison, which he does. There was a version of the story that extended deeper into the season, but ultimately, we pulled it back and did it in Episode 2, really because of what it did for the rest of the characters going forward. 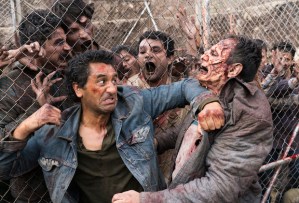 TVLINE | I thought it was pretty sneaky of you, letting him survive everything from Troy’s “science experiments” to the walker pit in the first episode, only to kill him at the top of the second.
The obvious way to go would have been for him to have his hero moment in the premiere and then die before the hour was over. For us, what was important was, we wanted the audience — and, more importantly, Madison, Alicia and Nick — to feel like, “Ah, we have a moment to breathe,” then take that away and ideally leave the audience breathless, at least for a moment. Which is what it does to Alicia if you’re watching. The way Alycia [Debnam Carey] played it is exactly the way it should have been played, [like] it was devastating and unexpected. It also leads to something of a bonding between her and Jake in the aftermath.

TVLINE | So there was something there. I didn’t imagine the spark.
That shared trauma will lead to a relationship that will develop over the next several episodes. It’s a very hard world, and I think what’s interesting in terms of the morality of the show is that Jake has echoes in him that are consistent with Travis. He has always been sort of a beacon within this community at the ranch, but he suffers for his idealism and his sense of hope. He’s endorsed the philosophy his father held before the apocalypse, and now, he’s very torn about his relationship with his brother. He knows there is a reckoning coming. I think what Alicia sees in him is someone who is unlike anyone else at the ranch.

TVLINE | Is it safe to assume that Travis’ shooting wasn’t as random as it seemed?
Yes, what seems like a random event isn’t. We’ll come to find out that the bullets were fired by a specific group for a very specific reason, and that, of course, becomes part of the larger story as we move forward. 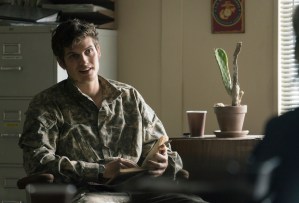 TVLINE | Before I let you go, the rats that swarmed Willy… were they walker rats or… I mean, not that regular rats aren’t bad enough…
[Laughs] They were just rats. That was our way of ripping off 28 Days Later, because I love that tunnel scene when the rats are being chased by the infected. Also, Troy is very dark, and we wanted to have a character in the premiere that’s worse, and that’s Willy. He’s just pure evil — incredibly cruel and sadistic, and he has fun playing with Travis. And since Travis didn’t get to kill him, we wanted to make sure that he went away before the premiere was done. Jason Cahill, one of our writer/producers, pitched doing sort of a toothpaste thing with a character being pulled through a hole that’s too small, and we needed a way to claw him into this space, so that’s where the rats came from. He deserved it! So there was at least a little bit of justice in a very unjust world.

So, what did you think of the premiere? Grade it in the poll below, then hit the comments.