After the Season 3 premiere of Fear the Walking Dead, you might have thought that there was no place a character could possibly feel more insecure than the Ottos’ compound (at least short of, say, Negan’s Sanctuary on The Walking Dead). But in Sunday’s episode, Strand proved us all wrong by being made a “guest” at an even less safe haven — and reuniting with a foe whose comeback showrunner Dave Erickson foretold more than a year ago. How dire was the predicament in which the sly devil found himself? Let’s put it this way: If at the Otto ranch you have to sleep with one eye open, where Strand wound up you probably shouldn’t sleep at all! Read on for the deets…

‘DON’T BE A POLLYANNA’ | After “Teotwawki” opened with a flashback to a commercial for Jeremiah’s four-part video series, How to Survive the End of the World as We Know It (teotwawki — get  it?), we jumped to a memorial service for Charlie and the other survivalists so recently lost. When Madison and her kids were cast as the “unprepared” outsiders to blame, she shrewdly reminded the ranch’s denizens that her family had lost someone, too, and thanked them for taking them in. Just like that, the wind shifted, and talk turned to the downed chopper. While Troy, blood-thirsty as ever, vowed payback against whomever had opened fire, Jake countered that, no matter what, “we have to be something hopeful in this world.” (Good luck with that, buddy.) After Maddie and Alicia overheard muttering that they were freeloaders, Vernon’s daughter Gretchen kindly reached out to her fellow teen and invited her to join the youngsters’ Bible-study group. She wasn’t taking no for an answer, either. When Alicia said, uh, we’re Jewish, Gretchen replied that that was no prob — they’d do Old Testament!

Meanwhile, Luciana, doing better but still cuffed to her bed (in case she croaked and turned), was eager to get the hell out of Dodge, which, of course, posed a problem for Nick, who was well aware that his mom intended for them to stay put by any means necessary. When not conflicted over that looming issue, he kept busy beating himself up for not taking out Troy. Thing is, Luciana pointed out, “you’re not a killer.” Speaking of Troy, when Madison returned to her family’s quarters, that was who she found there. First, he “praised” her manipulative speech at the funeral, then, after learning that before teotwawki she’d been a guidance counselor, he suggested that it hadn’t mattered that he hadn’t gone to school, because he’d had the ranch. Madison understood not just him but this world, he felt. That was why he’d chosen her to join them. Nick, on the other hand… “He doesn’t deserve his place here,” Troy said. “He’ll earn it,” Maddie snapped back. And before letting Troy go, she ordered him all mom-like to make the bed in which he’d crashed. (If nothing else, the psycho was right about the fact that she had his number.) 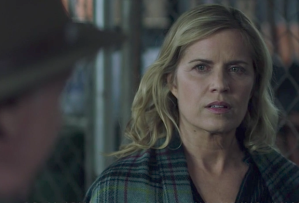 ‘BAD TIME TO FORM A CONSCIENCE’ | Off her encounter with Troy, Maddie warned her kids to stay away from him. (Who needed to be told that?) Furthermore, she assured them that those who were against their addition to the compound, they’d eventually win over. When Nick asked why she was so sure that this was the place for them, she noted first of all that they knew of nowhere better and second of all that Travis had died to get his ass out of the fire and at least back into the frying pan. Not knowing when to quit, Nick suggested that the less-than-jolly ranchers might not let Luci stay. If that’s the case, Mom said, he’d have a choice to make. Later, Maddie reported Troy’s break-in to Jeremiah and Jake, and asked for reassurance that the psycho cyclops wouldn’t make good on his threats against Nick. “Are you a hard woman to like, Madison?” asked Jeremiah, about as empathetic as you’d expect. Jake sensibly sided with Maddie, but it did no good. In the end, Jeremiah just had Jake show Maddie “the lectures” (aka those old VHS tapes full of survival tips). On her way to Bible study, Alicia was asked by Nick whether she wanted to stay at the ranch. “It’s all just different circles of hell” out there, she said. “Why not this one?” In turn, he admitted that he knew their mom was right — he was the reason Travis was dead. He also noted that damn, something had happened to his sister out there that had changed her.

Meanwhile, Jake warned Troy to stay away from the Clarks. “If the ranch knew what you really are… ” Jake began. But he couldn’t bring himself to say aloud that his brother was as unstable as a meth lab with a machine gun. Ultimately, though Troy maintained that his murderous science experiments at the depot had been for all of their good, he said that he’d steer clear of Maddie’s family, and yes, he’d really heard his sib. Mean it? “I always mean it, Jake.” Nearby, Alicia was delighted to discover that Bible study was actually just an excuse to get high and drunk while laughing at biblical terms like “sackcloth.” The group even had a kind of mascot: Jeff, a severed walker head that they kept in a bird cage. Through him, Gretchen and the kids asked Alicia questions, such as, what was it like out there? “Chaos. Ruin. And it changes you,” she said. “Not like Jeff, something worse.” After Alicia asked Jeff who the Ottos were, and the kids explained that Troy and the militia did what they couldn’t, she was prompted to confess that, out there, she’d killed a man. How had it felt? “Easy,” she admitted. (R.I.P., Andres.) 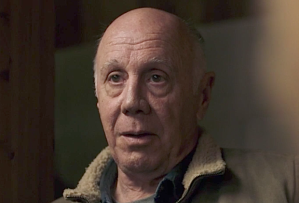 ‘WE SURVIVE NOW AT ALL COSTS’ | Watching outtakes on Jeremiah’s old videotapes, Madison saw the Ottos’ patriarch being abusive to his wife and family. “Not my finest moment,” he admitted when he happened upon the scene. Jake’s mother had been his first wife, he went on to explain. Troy’s mom died before teotwawki. Like Troy’s mom, Madison’s father had been a drunk, she said, doing some dark bonding. Troy had tended to his mom at the end, Jeremiah said, and she’d hated him for it. He’d been no help himself; he suffered from the same affliction. Later, while Nick set off boar hunting with Troy and some of the other guys, Maddie bonded some more with Jeremiah, sharing a smoke, confessing that her son’s an addict and asking why he tolerated Troy. In response, Jeremiah showed her “the pantry” under his house — really, a well-stocked, well-armed bunker for teotwawki — and explained that he’d broken the boy in the old world; in this new one, he was able to give him a purpose. Out on the hunt, Nick got the drop on Troy and wondered aloud how long it would take him to turn. “If you do [pull the trigger],” Troy suggested, “you should time it.” Ultimately, Nick did shoot… but only the ground next to Troy. In their ensuing scuffle, Nick tore up the survivalist’s book of notes on walker turn times, and miraculously, at the end of it all, One-Eye decided,  “I think we can be friends now.” The next day, upon getting an update on Outpost Alpha, Troy prepared to lead a party out to check on it, and Madison not only volunteered to go, she placed his napkin in his lap like a mother would.

While all this was going on, Strand, driving the most stylish of speedsters (thanks, Ilene), passed by a long line of pedestrians waiting for a ration of water. When he reached the front, he asked the equivalent of the bouncer for his pal Mr. Dante and was sent to the back of the queue. Victor’s attempt at a bribe only made matters worse. Luckily, once he was face to face with Dante, it looked like they actually were old pals. There was laughter, champagne and a bittersweet mention of Thomas. But appearances were deceiving. After Dante had his henchmen throw a cartel member off a ledge into a pit of walkers, he revealed that there was no room in his world for opportunistic people like that… or Strand! The Grim Reaper breathing down his neck, Victor insisted that he wasn’t there to steal the water Dante controlled. On the contrary, Dante needed a shrewd adviser like him: His old crony was begging for an attack, serving water as close as he was to the source, Victor suggested! OK, fine, Strand could live, Dante decided. But, while he worked off his debt, he’d be made to “feel just like the people [he’d] taken from… powerless.” Next thing we knew, Strand was locked up and being delivered a drink of water by just about the last person on earth he expected or wanted to see: Daniel! “I told you I’d be your guardian angel,” threatened Ofelia’s father.

So, what did you think of “Teotwawki”? Glad to have Rubén Blades back in action? Hit the comments.