If it’s always darkest before the dawn, daybreak must be right around the corner. As Season 2 of Fear the Walking Dead drew to a close Sunday, not only did the Grim Reaper make off with enough characters to populate a whole other series, but we were introduced to the volatile “new” Travis that EP Dave Erickson teased back in August, learned along with Nick and Luciana that there was more to Alejandro than met the eye, and watched a little sadly as Alicia completed her transformation into a post-apocalyptic survivor. What did you think of the two-parter? Let’s review the major twists of plot, then you can grade it and hit the comments with your critique.

‘GAME OVER’ | As the first episode, “Wrath,” began, Nick and Reynaldo snuck off to deliver the Oxy that Marco was expecting, only to be informed that he’d made a deal with a bigger drug lord in exchange for the location of the colonia. So, instead of supplies, the scouts went home with a warning: “Leave now or die.” While Nick tried to sell Alejandro on a plan to pack everyone up and run for it, a patient in the infirmary turned and went on a rampage, biting three people, including the pharmacist. “Estoy bien,” he insisted. Only he was anything but bien, and Nick knew it. Finally, he convinced Alejandro to admit to Luciana that he was not immune. The previous bite that he’d survived hadn’t come from a walker but from the junkie he’d tried to help. The legend only came about afterwards, he said, because “people told the story they wanted to believe.” Though Luciana was hurt enough to call Alejandro dead to her, she still refused to leave the colonia with Nick.

‘YOU BELONG HERE’ | At the hotel, Alicia and Travis took turns apologizing to one another — her, for potentially pushing Chris further away; him, for not having recognized that she’d needed protection from his sick son. Later, Madison realized that the jerks who’d arrived the previous evening were the jerks with whom Travis had left Chris. Since they reported that their teenage companion had died when their truck had rolled, Madison took Strand’s advice and was sending them away in order to leave Travis with hope that his son was OK when — damn the luck! — he spotted her escorting them off the premises. In no time, he caught the lowlifes in a lie about how Chris had died and got the truth out of them: Chris’ leg had been busted in the accident, so Brandon had shot him a la James. Flying into a Rick Grimes-worthy rage, Travis proceeded to brutally murder both Brandon and Derek, leaving Oscar with a serious head injury in the process.

‘THEY DESERVED IT’ | In Episode 2, “North,” Strand argued that, since Madison had decreed that anyone who raised a hand to somebody else in the hotel would be exiled, she could hardly fight for Travis to stay. Alicia agreed — but, rather than just banish him, they’d leave with him, she suggested. “We found this place, and we’ll find another.” Naturally, Maddie asked Strand to come along, but he declined the invitation. That night, as Andres was forced to perform brain surgery on Oscar with a box cutter, Travis warned Maddie that he’d changed. “I’m no better. I’m worse,” she replied, adding that she’d killed Celia to protect Nick. So “I’ll understand when you do it again… We will have to.” After Oscar died in surgery, Hector attacked Travis, and Andres went so far as to pull a gun. “Why does he get to walk away?” asked the brother of the deceased. But, before Andres could exact his eye-for-an-eye revenge, Alicia (!) stabbed him, and, with Strand’s help, she, Madison and Travis made it out of the hotel. Even then, Victor refused to go with Maddie. “I’ll be OK,” he promised. And, when Strand says that, you can actually kinda believe him. 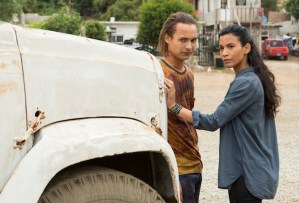 ‘THIS IS NO PLACE FOR BOYS’ | Back at the colonia, Luciana — hoping that faith in a fraud was better than no faith at all — instructed a dying Alejandro to give his flock one last pep talk. Or, as she put it, “Lie to them again before you go.” And by God, he did manage to give a pretty rousing speech. At the same time, Nick — getting the hell outta Dodge — spotted a chopper just across the border to the US and made a U-turn back to the colonia. There’s an encampment, he informed Alejandro and Luciana. Everyone could be safe! So, ultimately, to lead the colonists across the border, Luci did take off with Nick, leaving behind Alejandro to “die a beautiful death” by driving the bus through the gate to sick the walkers on Marco, Antonio & Co.! Unfortunately, that meant that, by the time Madison, Travis and Alicia followed the clues from Marco’s former HQ to the colonia, Nick was gone. All that remained were walkers and Alejandro, who — thanks to apparently the slowest-working zombie infection ever — was able to tell Maddie before croaking that her son was headed for the border.

‘WELCOME TO AMERICA’ | Speaking of Nick, as he, Luciana and their entourage got within a coupla hours of the refugee camp, men in military gear began shooting at them. (Unless my geography is all wrong, this meant that the guy who shot at and apprehended Ofelia in “Wrath” was also part of this troop.) While the colonists scattered, Luciana was shot, and Nick, kicked unconscious. So Season 2 ended with the newly minted lovers’ fate very much up in the air.

What did you think of the finale? Did they kill off any characters that you’ll miss? Grade the two-parter below, then hit the comments.