Juliette does a mean, lowdown, plain-old bitchy thing in this week’s Nashville and, I swear on Dolly Parton’s storied wig collection, it could not come at a better time for the CMT drama.

What better to pull us out of our post-Rayna grief haze than Music City’s other diva extraordinaire making a painfully on-brand return to form? With all of the feeeeeeelings that have been making the rounds since Big Red’s unexpected trip to the Grandest Ole Opry of All, it feels kinda refreshing to see Ms. Barnes — who, indeed, has grown and matured since we first met her — make a move that her Season 1 self would’ve happily co-signed.

Oh, and Damien shows up in Nashville, which is somehow way less dramatic than I envisioned.

Read on for the highlights of “‘Til I Can Make It on My Own.”

BUT NOW WE’RE STRESSED OUT | Juliette opens the episode by telling her doctor about that weird moment she had when she was waiting for Maddie in the café last week, a phenomenon he believes is “psychological, not neurological.” This enrages her, especially when he suggests that her mini-fugue states may be related to a childhood trauma and not her recent plane crash. Avery pipes up that Juliette’s father died when she was 4, but Ju shuts him down quickly and says she’s got no time for psychobabble, because she’s got a Music City Music Week festival concert appearance featuring the church choir the following evening. The doctor adds that her episodes are likely triggered by stress, and floats the idea of cancelling the show.

As she and Avery leave, Juliette can’t decide what to do. For what it’s worth, she’s convinced that her little check-outs were caused by the bad reviews of her gospel album, though Avery is skeptical. “My brain can’t process failure!” she cries. (Ha!) But then she comes up with a plan, right on the spot, and sends him off to play his Music Week slot… while she calls Glenn and tells him that she’s decided to perform at the festival without her new church besties. He’s like a) the concert is 40 hours away, and b) you’re a terrible person, then refuses to do her bidding.

So Juliette summons Hallie to her rehearsal and lies, saying that the record label is ordering her to play only her old stuff — solo — at the gig. Ju softens the blow with the promise of a five-date mini-tour with the choir, but Hallie can’t hide how disappointed/angry she is, and the whole interaction sets off another “foggy episode” in which Juliette zones out; she’s helped a little when Hallie coaches her to breathe and think about her happy place, which causes her to flash back to hanging out with her dad at the trailer they shared with Jolene. (Side note: Props to the show for bringing Sylvia Jefferies back to play Ju’s mama in the flashbacks.)

When Hallie breaks the news to the choir, they think she’s nuts: CLEARLY, Juliette isn’t telling the truth. And when Hallie later stops by Ju’s to pick up passes and such to watch the Music Week performance, Emily obliviously let on that the label had nothing to do with the abrupt change of plans. (Dude, Juliette, if you’re gonna be bad, at least let your assistant in on it!) “You selfish, narcissistic bitch!” Hallie spits at the blonde, who — frightened by the occurrence of another episode during a rehearsal — at least has the good grace to end the falsehood right there. “I can’t go back out there after all this time and promote something nobody gave a crap about!” she says, but Hallie doesn’t want to hear it, especially when Juliette maintains that she really cares for her plane-crash angel. “There’s only one person you care about,” Hallie says, leaving. 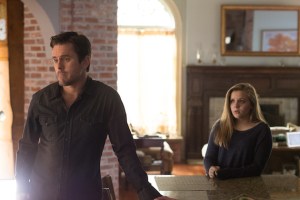 NEW ROOMIE? | Let’s take a break from JuDrama for a while. Daphne’s lying to Deacon about hanging out with Liv, the homeless girl from the last episode. (I’m going to recap this new teen storyline lightly in the hopes that it goes away soon: While I’ve got no beef with Daphne or Maisy Stella’s portrayal of her, I fear a Maddie’s Terrible Year redux, and nobody wants that.) Liv cuts her arm fleeing from getting caught stealing from a salvage yard, and when Daphne fears that the girl’s wound will get infected, she brings her home for some hydrogen peroxide and a few Daria episodes. Then Daph decides that Liv should stay in her room, a fact she unsuccessfully tries to hide from Deacon. Deke says no to Liv’s residency, but upon learning she’s 15 and was abandoned by her folks, he softens and lets her stay “until we can figure something out.” Later that night, while Daphne sleeps, Liv looks at a photo of Deacon, Rayna and the girls and cries.

BYE, BUCKY | Perhaps Deacon’s ability to think clearly is hampered by the fact that Zach is dogging him to fire Bucky. The tech mogul brings it up at every opportunity — including just before Voice winner Casadee Pope gives Deke the world’s most awkward hug at the entrance to the music festival (it was weird, right?) — and maintains that Buck’s adherence to traditional publicity models will hurt the release of Maddie’s forthcoming single. For what it’s worth, Zach wants to do a low-key midnight release targeting influencers, which only makes me think about that You’re the Worst episode where Sam and the guys want Gretchen to throw a secret show… and then they’re mad when no one shows up.

Bucky’s not dumb, and when he tells Deacon he knows something’s going on, Deke confirms it but says he’s not on board. Nevertheless, Bucky turns in his resignation by the end of the episode, tearfully advising Deke to “be careful, because I’ve got the feeling I’m only the first.” Aw, Buck! 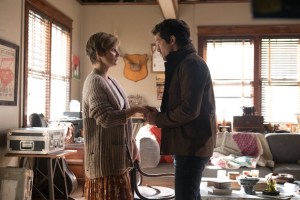 DADDY’S HOME | Damien’s in town, so Scarlett meets him to tell him he inadvertently put a little Yorkshire Pudding in her oven. He drinks a lot of vodka, then tells her he wants to make a go of it with her, but she turns him down. This is probably smart. But the whole situation probably isn’t as wrapped-up as it appears, given the way Damien watches The Exes share a close moment at the festival later on. (Side note: During The Exes’ festival performance, it looks like Gunnar is dabbling with a smoky eye. Let’s hope it continues, because I, for one, am 100 percent here for his Guyliner Experimentation Phase.)

ALWAYS BRING BACK UP (SINGERS) | Back to Juliette, who processes what she’s done — Avery’s expression when she asks, “Am I narcissistic?” is amazing — and then goes to the church to apologize, saying she acts out of fear that people will know she’s a fraud. (The fact that even her happy place memories have devolved to scenes of her parents’ fighting and her father’s death speak to her inner turmoil.) But Hallie & Co. don’t really care, and I can’t really blame them: For all her talk of not exploiting the choir and its sound, that’s exactly what she’s done. She asks them to join her on stage at the festival — the mini-tour was also a lie, so this will be their only chance to perform together* — but there’s no indication that they will.

So as she gets ready to sing later that evening ($10 to anyone who can define Juliette’s on-stage style for me, because right now, my best guess is “Egyptian-robot chic”), Ju is overjoyed to see the choir show up for her. I’ve said it before, but as long as this show keeps doing it, I’ll say it again: No rehearsal whatsoever? This should be AMAZING.

They go up on stage and vamp, waiting for Juliette to make her entrance, but it takes her longer than usual because she’s having a vision of her ghostly dad hugging her in a forest. But when she comes out of it, she proudly climbs to the stage and joins her church friends for a well-received version of “I’m on My Way.” Meanwhile, Avery turns down an opportunity to open for Edward Sharpe on tour, because Juliette “needs” him — though he never consults with her on the matter. There is absolutely no way that this won’t lead to some kind of trouble.

* (Start small rant) You mean to tell me in the southern United States, where seemingly every other station on the radio dial is a Christian one, there’s NO money to be made in having Juliette Barnes and Friends play their gospel numbers? (End small rant)