Now that Nashville‘s Rayna Jaymes is buried under (too soon?), her friends and loved ones have to learn how to move on. But as the midseason premiere demonstrates, that’s far more easily said than done — or sung.

Daphne, in particular, finds herself adrift after her mother’s unexpected death, and Deacon has no clue how to help her. The widower is equally in over his head at Highway 65, where Zach is throwing around start-up buzzwords and suggesting the sacking of loyal, longtime staff members

And then we find out who Scarlett’s baby daddy is.

Read on for the highlights of the midseason premiere, “Back in the Saddle Again.” 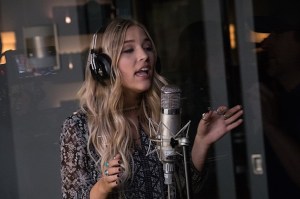 A BLESSED BUST | Ten weeks after the events of the midseason finale, Juliette gathers Hallie and other members of the Mountain Rose Baptist Church choir for a party celebrating the release of her gospel album. But the reviews aren’t good — they call Ju’s passion project everything from a “treacly mess” to “culturally tone deaf” — and Juliette smarts from the harsh criticism. Avery maintains that if she’s happy with the work, she should be content. Silly Avery! Have you never met your wife/ex-wife/whatever she is now?

So Juliette chooses to channel her frustration about her own album into consulting on Maddie’s — specifically, the first single. But when she suggests a few changes about the hook, Maddie acts like Juliette kicked her puppy up and down the avenue. She records the song both ways (hers and Ju’s) then makes Clay take a blind listening test to say which one is better. Of course he picks Juliette’s, but then advises that Maddie follow her heart. There’s a whole lot more of Maddie being rather precious about her art — kid, you’re 17, and a major recording star is giving you her expertise for free because she likes you and she loved your mama, so how about we hush up a little, ‘kay? — but she eventually realizes that Juliette’s version is the right way to go. (P.S. It IS.) 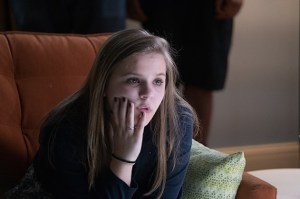 DAPHNE’S TURN TO BE THE PROBLEM | Daphne’s in danger of failing history and having to repeat seventh grade, a situation Deacon wasn’t aware of but is determined to reverse. So he helps her with a big school project, creating a model of Amelia Earhart’s plane, but a kid accidentally knocks it out of her hands before class and the thing busts into a jillion pieces. (Side note: That’s some shoddy craftsmanship, Deke.) So she ditches school and winds up hanging out with a homeless girl who lives with other runaway types in an abandoned building. The new girl, Liv, and Daphne bond over their shared love of Daria. (Side note: Aren’t they way too young to know that show? Or are the kids streaming it now? And could I write any other sentence that would make me sound as old as that last one did?)

When Daphne returns home, Deke and Maddie are relieved: The school had reported her missing, and with the whole stalker thing in the family’s recent past, they were understandably worried. But Daph is so despondently “whatever” about the whole thing that Deacon takes her to a counselor who’s got some news for him: Daphne’s not just grieving, she’s going through major depression triggered by Rayna’s death.

So after some forced joviality at home — and one truly silly dad joke — Deacon is able to get through to his younger daughter, if only a little. And when Maddie and Deke go to hug her, she doesn’t pull away.

TECH TALK | At work, Deacon is overwhelmed by Zach’s plans for the company (which isn’t turning a profit at the moment, btw). But then again, Zach is using words like “disruptor” and “mindshare” and suggesting that Bucky be put out to pasture, so it’s no wonder that an old-schooler like Deke is uninterested in pretty much everything the tech wunderkind has to say.

Oh, and Zach and Will are officially boyfriend and boyfriend, a status cemented by Zach’s enthusiastic appearance at Will’s concert.

YOU… ARE NOT THE FATHER! | So that leaves us with Scarlett, who’s able to shake off her pregnancy queasiness for a rollicking Exes show but who is generally hating life otherwise. Damien keeps calling and texting, but she’s ignoring him… at least until the paternity test Gunnar took comes back.

But when it does, it’s negative: Damien is the daddy. “It’s OK. It doesn’t matter. I still love you,” Gunny says as he hugs Scarlett close, and it takes me a full 30 seconds to remember exactly what their relationship deal is right now. (Answer: undefined.) Later on, Gunnar processes all of his emotions while Avery listens; Gunny had gotten used to the idea of having a family with Scarlett, and he’s having a hard time letting go. “Why can’t I just man up and get over it?” he laments, and if there’s a better summation of Gunnar’s entire existence, I haven’t heard it.

Avery suggests that his friend just “try again. Fail better.” And that sends Gunnar literally running to Scarlett’s place, where he pledges to love her imperfectly and wonders if they can try again to be together. She agrees, and then embrace, but she looks like the whole thing hurts her. Or maybe that’s just the constant acid reflux.

Now it’s your turn. What did you think of Nashville‘s return? Sound off in the comments!