Need to catch up? Check out the previous American Gods recap.

We meet a new god — who, ironically, isn’t a New God — in this week’s American Gods, and he’s seriously gunning for Shadow and Wednesday.

Sure, at first glance, Vulcan seems like your average gregarious, friendly bullet-factory owner. But there’s more to his ammunition than you might think, and he’s just as slippery as the molten metal flowing through his foundry.

Elsewhere in America, Laura “Dead Wife” Moon and Mad “Unlucky Charms” Sweeney run into someone new to them (but not to us). Read on for the highlights of “A Murder of Gods.”

CHEESE AND RICE! | This episode’s Coming to America vignette follows a group of people crossing illegally into the United States. As they ford a river, one man nearly drowns but is saved at the last moment by a man who appears to walk on water. “You already know my name,” the kindly, long-haired stranger tells him when they’ve reached the other side, but then men with rifles pull up in trucks and start shooting on the immigrants.

Many of those who crossed the border are hit, but the Jesus-looking man with the long hair steps into the path of a few bullets that are about to hit others. He takes a shot through each palm and one in his chest, then falls to the ground with his arms outstretched. A tumbleweed rolls across his face, leaving what looks like a crown of thorns on his head. Hey guys? I think this might be the aforementioned Mexican Jesus.

WOOD YOU HELP ME? | Out on a road somewhere, Shadow and Mr. Wednesday are walking as quickly as possible away from Mr. World, Media and Technology Boy’s murderous trashing of the police station. Well, Wednesday is walking. Shadow is limping a bit, thanks to the wood that tried to take a piece of him, and he’s having trouble processing everything they saw. Wednesday calls the deaths “a warning to me, a sacrifice to them.” Shadow hesitantly wonders if he means that the others are gods, and then he asks the older man a pointed question: “Who are you?”

Wednesday looks at him and simply replies, “If I told you, you wouldn’t believe me.”

Maybe it’s the blood loss, but Shadow chooses that moment to blurt out that Laura is back from the dead. But when the men return to Shadow’s motel room, all that’s left is Laura’s wedding ring and the destruction from her fight with Mad Sweeney. When Wednesday sees Mrs. Moon in the rearview mirror, running toward their car, he turns up the radio and hits the gas, leaving her behind.

When Shadow’s condition worsens during the drive, Wednesday pulls over and takes a good look at his bodyguard’s wound. He likens it to getting shanked by a dirty shiv, then cradles the younger man close as he reaches into the bleeding cut (ew ew ew) and rips out something that’s a cross between a seedling and the bug that Morpheus’ crew yanked out of Neo in the limo in The Matrix. (Side note: I loved Wednesday’s little kiss to the side of Shadow’s head at the end. 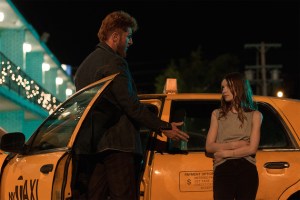 TAXI! | Back at the motel, the cops have taken Laura’s car, so she demands that Sweeney help her hotwire one. While he’s trying to break into a cab, he says that he’s figured out that he needs to help her get resurrected: That way, she won’t need the coin anymore, and he can have it back. They’re arguing when they hear the sound of a gun being cocked, and when they look over, the man holding the weapon calmly says, “Please stop stealing my cab.” It’s Salim! (Aw, hi Salim!)

He overheard Mad saying he was a leprechaun, and that’s helpful, because Salim is looking for a jinn and has been driving in the direction of Mecca for days. “Take us to Kentucky” — where there’s a “murder of gods” assembling, Sweeney says, and “I’ll tell ya where to find your jinn.”

After some fun/gross callbacks to the taxi being used as a toilet at one point, they take off. From the way Salim talks about the car’s former driver, it becomes clear that he’s smitten. “I pray I find the jinn. He is my afterlife. I knew him. We knew each other. Now, I want to know more,” he tells Laura. And because Mad has the emotional maturity of a randy pre-teen, he pipes up, “Did you have a genie in your bottle? Did you rub one out of him, darling?” SHUT UP MAD WHAT THOSE TWO HAD WAS BEAUTIFUL AND YOU WILL NOT TARNISH IT. Anyway, when the leprechaun snoozes in the backseat, Laura has Salim direct the car where she wants it to go, which is not Kentucky. 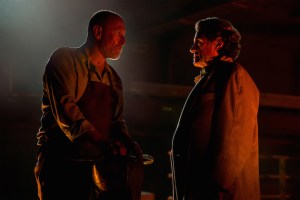 SHADOW VS. THE VULCAN-O | When we check back in with Shadow and Wednesday, they’re driving into Vulcan, Va., a town where everyone packs heat, wears armbands in a totally not white supremacist way as they pledge allegiance to the local munitions plant — which, by the way, made the bullets that landed in those border-crossers at the top of the episode. Vulcan’s citizenry is marching in a procession led by a grizzled man in a bomber jacket, and everyone has a gun in his or her hand: They’re mourning the munitions plant’s latest casualty, a worker who fell into the molten metal and wound up (as seems to be the tradition) just another ingredient in the rounds.

“If I know my friend, someone got tossed into the volcano,” Wednesday quips. When a shocked Shadow mentions human sacrifice, the older man merely mentions that these kind of deaths happen a couple of times each year.

When the memorial march is over and everyone has shot far too many bullets into the sky in the deceased’s honor, the popular guy at the head of the pack and Wednesday greet each other like old pals. It’s obvious that he’s far better off than most of the other Wednesday cronies we’ve met: He’s got a huge house filled with exotic taxidermy, and he attributes his success to “franchising” his faith with what he calls palm-held volcanos, and what we call guns. They’re “filled with prayers in my name,” he gloats.

Vulcan exuberantly agrees to join Wednesday in Wisconsin, then says they’ll leave as soon as he can forge a sword for the old con man. But when Vulcan leaves the room, Shadow makes it known that he’s profoundly uneasy at everything that’s going on, starting with how Vulcan keeps making lynching references as though he somehow knows about that spot of bother with Technical Boy a few episodes back. For what it’s worth, I’m uneasy, too: Between the subtext and the violin stings on the soundtrack, I haven’t been this unsettled by a scene since the drug-deal sequence in Boogie Nights.

But Wednesday, of course, is two steps ahead of everyone. So when he and Shadow meet Vulcan at the foundry, where Big V is making him “a blade worthy of a god,” they finally have it out about Vulcan colluding with the New Gods, who are on their way to nab him and Shadow. “They gave me a gun. They put power back in my hand,” he says. “And I gotta tell ya, it feels good.” So while a horrified Shadow watches, Wednesday calmly explains that Vulcan will be a martyr — it’ll look like the New Gods offed him for pledging loyalty to Wednesday’s cause — and then slices his friend’s head clean from his neck, then pushes both so they fall in the vat of insanely hot bullet batter. Then, for good measure, Wednesday pees into the mixture (“I’m laying down a curse,” he explains), while a really freaked-out Shadow tries to process what just happened.