Need to catch up? Check out the previous American Gods recap.

Even if your Memorial Day weekend is marred by bad weather, ants at your picnic and loudmouth in-laws working the grill, it’s safe to say that you’re still having a better time than Shadow Moon.

In other news, is Gillian Anderson committed to her portrayal of Media — who appears in this episode in two iconic guises — or what?

Read on for the highlights of “Lemon-Scented You.” 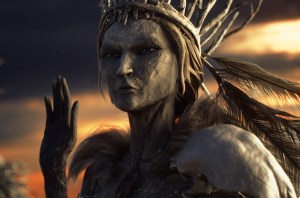 ATSULA’S STORY | The hour begins with an incredibly cool-looking Coming to America vignette about Atsula, whose people crossed the land bridge from Siberia waaaaay back in the day. (Is this stop-motion? CGI? I know very little about animation, but I know this just looks so awesome.) Atsula eventually comes face-to-face with the buffalo we’ve seen in Shadow’s visions; she pays the ultimate price, but her people wind up thriving afterwards. 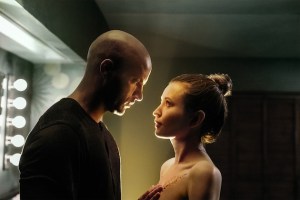 SOMETHING ROTTEN | Back in Shadow’s motel room, a fly buzzes around Laura while she waits for her husband. Eew. She must smell amazing. When Shadow finally enters and stares at her in disbelief, he throws a pillow right at her face (ha!), just to make sure that she’s really there. It’s not long before he’s lighting into her for cheating on him, and she listens calmly but tries to distract him by focusing on the bigger picture: She’s dead, but she’s there, and isn’t that awesome?

She answers his painful questions about her affair with Robbie, saying that she waited 13 months (“a baker’s year”) before sleeping with Shadow’s best friend, and admitting that she was never really rock-solid on her whole I’ll-wait-for-you-until-you’re-paroled thing. “I sort of knew that it had the potential of being a lie,” she says, and her matter-of-fact delivery makes me love and hate Laura at the same time. She maintains she loves her “Puppy,” she explains what motivated her to give Robbie his fatal blow and then says of her post-accident experiences, “Then I was somewhere, and then I was in a box,” which has got to be the “yadda yadda yadda” of afterlife recounts, no?

She soaks in a tub to warm herself up, just in case he wants to kiss her — and he does, causing her heart to beat just once — but he makes it clear that things are really not OK between them. She’s unfazed, standing there in nothing but her Y-incision and a smile, and she asks him if he’s still her Puppy. “No,” he says firmly, “I’m not.”

GROUND CONTROL TO MAJOR TECH BOY | While the Moons are catching up, a raven arrives at Mr. Wednesday’s door. Soon after, the older man is calling on his bodyguard, who says nothing about Laura’s presence — but Wednesday senses something rotten. No, literally, I mean, he asks, “What is that smell? Cat piss and oven cleaner?” (Side note: I KNEW it!) But Wednesday he can push his way into the room, a police car pulls up to the hotel and officers cuff both men, arresting them for the Chicago bank robbery.

Meanwhile, Technical Boy is leaving a club when one of those little spheres of his slaps itself over his face, and pretty soon he’s sitting opposite David Bowie in a limo. Well, it’s not really the rock icon: It’s Media, last seen as Lucille Ball in the TV at the big box store, and she’s there to deliver a message. “You have an image problem. You need to think about your brand,” she informs the pissy young god, adding that someone named Mr. World is watching.

She also relays the directive that Tech Boy is to apologize to Wednesday and Shadow for nearly killing the latter. As TB balks, he gives us a little clue about what’s going on. “Wednesday’s collecting monsters,” he says sulkily, “F—ing Pokemon. He’s recruiting.” But Media is insistent. 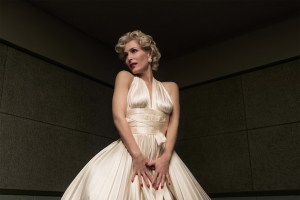 WHO’S THE NEW GUY? | At the police station, Wednesday is doing his addled old man con while Shadow demands a lawyer at every opportunity. And when Wednesday’s act isn’t successful, he decides to play it straight: When asked why he was in the Windy City, the old man responds, “I was recruiting a tired, but vital, god of death into a war against the new gods, who very rightly fear him as much as they should fear me, but don’t. Yet.” (Ha!)

The detective questioning Shadow is intrigued by the tip she got on the two criminals: A fax, complete with GPS coordinates, provided using the same technology that helped catch Osama bin Laden. ” You two have very extravagant enemies,” she notes. But neither man will confess anything, so she leaves them alone… which is just enough time for Anansi (in teeny spider form) to unlock Mr. Wednesday’s cuffs. The bodyguard has a huge realization: Wednesday isn’t just on a trip, he’s running from someone who’s after him. Wednesday cops to it, adding that his pursuer is “someone you don’t want to let see your face until you’re ready to be seen.”

But that’s all moot, because just then the interrogation room door blows open and Media — this time appearing as Marilyn Monroe in The Seven Year Itch, complete with blowing grate — floats into the room, followed by a dapper man in suit, overcoat and hat: It’s the aforementioned Mr. World. Mr. World waves his hands over Shadow’s restraints and they unlock, but Wednesday warns his employee not to say a word.

Doesn’t seem to matter, though, because Mr. World already knows every little detail about Shadow, and when he morphs his face into the way Shadow looks during his special happy alone time, things get weird. “Everything that happens is recorded, and stored, and recalled,” the man informs Shadow, who is really quite messed up by everything that has taken place in the previous five minutes or so.

GETAWAYS GALORE | Tech Boy and his highly stupid hairdo are brought forward to insincerely apologize for lynching Shadow, then Media gets to the point: She and Mr. World want to help Mr. Wednesday “find your audience” by forming a “merger.” There’s some vague-yet-horrifying talk about merging everything into “a single product manufactured by a single company for a single, global market,” but Wednesday thinks he sees the offer for what it really is.

“You say ‘merger,’ I say ‘exile,'” he points out, adding that people like Tech Boy merely occupy people’s time, whereas “We gave back. We gave meaning.” So Mr. World draws the pitch to a close and asks Wednesday to think about it, and when Tech Boy throws a fit about how they’re letting the men go, Media blows him a kiss that knocks out two of his teeth.

Mr. World’s violence continues on the way out; when Shadow and Mr. Wednesday finally emerge, they realize that everyone in the precinct is dead. And Mad Sweeney, who’s cooling his Irish heels in the back of a cruiser outside, thanks to being arrested for “killing” Laura when he came to the motel looking for his coin, realizes that something really not OK is going on. He kicks out the car’s window and somehow levers himself out, still handcuffed.

At the morgue, Laura busts out of a body locker herself, likely killing the poor medical examiner who came to investigate the noise. She steals a Jane Doe’s clothes, then leaves. Also important to note: In this episode we learn that Mad Sweeney can’t take the coin back from Laura, she has to give it to him. Or, as he points out, he can wait until her body eventually falls apart (say it with me now: eeew) and then just pluck it out of the pile of bones and guts. Now, who’s ready for a juicy, holiday weekend burger?