In a sequel of sorts to “International Assassin,” The Leftovers returned Kevin to the other side in Sunday’s “The Most Powerful Man in the World (and His Identical Twin Brother),” setting the stage for the mind-screwiest episode of Season 3… at least until we get to the series finale. Was our hero able to accomplish his mission(s) in the Bizarro World hereafter? And what familiar faces helped/hindered him along the way? Read on…

‘SO, LET’S GET ASSASSINATING, SHALL WE?’ | The hour opened with a flashback to Kevin and Nora in happier times. Which, for this quirky couple, meant discussing in the bathtub their post-mortem wishes. She wanted to be cremated; he, stuffed. Fine, she said, but first he’d have to grow a beard — so that he’d have one when she had sex with his remains. From there, we flashed forward to the present, in which Kevin Sr. awakened terrified that, it being the anniversary of the Sudden Departure and all, Laurie had managed to talk Kevin out of being drowned. Of course, as we know, she had done no such thing in “Certified.” In fact, Kevin was outside in the storm at that very moment drowning himself using Grace’s patented seesaw method. “I thought we’d do it together,” said Kevin Sr., making it sound like a missed opportunity for father/son bonding. Since the Garveys were both present at that point, along with John, Michael and Grace, they resumed drowning Kevin, who, upon making it to the other side — sans clothes, as usual, and also sans beard — was immediately attacked. Luckily, Dean took aim in the nick of time to save “Mr. Harvey” from his assailant and remind him never to look into a reflective surface — that was how “they” had found him.

Moving on, Dean informed Kevin that, in under two hours, the president was going to start an unsanctioned nuclear war, and the super-assassin was the only person who could stop him. Fine, said Kevin. But first, he’d need to talk to a few people, including Christopher Sunday, who he learned was, in this plane of existence, the prime minister of Australia. That kind of access could only be granted by “the boss,” so Dean gave Kevin an earpiece to serve as a direct line to… the stranger Kevin had once met on the bridge, the same man who’d emceed Karaoke Night in “International Assassin.” Did Kevin remember what the man had whispered in his ear on the bridge? Yes — he’d said that Kevin was the most powerful man in the world. And when he looked in the mirror on the fellow’s orders, he realized that it was true — he was transported into the body of the president. It was still Kevin, only now he had a beard and was wearing a white suit. Oh, crap — everyone was in white! The Guilty Remnant party was in control! Reading a speech from a TelePrompter, Kevin introduced a finalist in a contest to write an essay about the evils of marriage: Grace’s son Liam, sitting in the front row, shoeless, as were his brothers and sisters! 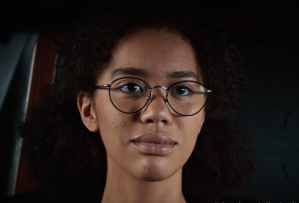 ‘IS THAT SUPPOSED TO MAKE SENSE TO ME?’ | Though Kevin, as promised, asked Liam what had happened to his and his sibs’ footwear, they didn’t know (and were confused that he was asking for someone in their family since, per GR dogma, there is no family). Next, in came Evie using a bullhorn to sing “Love Will Keep Us Together” as loudly as possible. As Secret Service — led by the Australian police chief Kevin — escorted the president away, he insisted on Evie being brought to him. En route to the limo, his chief of staff called and explained that Kevin was being taken to a secure location that only his unique biometrics would allow him to enter. From there, he could launch his attack against the Ukrainian separatists who’d commandeered a nuclear submarine. In the car, Kevin asked Evie if she knew he wasn’t really the president. She did, she said. But really, she didn’t, not in the way that Kevin knew. At any rate, he delivered John’s message, at which point she became outraged — her parents and brother had been killed in a drone strike he’d ordered! Evie thought they were dead, and she was alive! As she accused Kevin of not being the president but a mere puppet — sound familiar? — water began spewing from his mouth, a sign that he was being pulled back…

Yes, back to the other side. There, he told Grace that her kids had no idea what they’d done with their shoes, and informed John that he’d given Evie the message. But why had they pulled him out of the pond? He didn’t have Christopher Sunday’s song yet. So it was up to the tub for Kevin. “If I could do this instead of you, I would,” Kevin Sr. said. But, since the secure location could only be accessed by Kevin’s exact biometrics, it had to be him. Back on the other side, to gain entrance to the secure location, the president underwent not only a facial scan but also a penis scan — no imposter would go to “that length,” Aussie Kevin explained. He also had to name his pet (he’d had none), his favorite movie (The Godfather, Part 2) and his Secretary of Defense… oh, crap — Patti! In the situation room, the onetime GR leader smacked Kevin when he asked to speak to Christopher Sunday before taking them to DEFCON 1. They’d been planning this for years — why was he dicking around? Just then, the vice-president entered — Meg! — and revealed that the president was being conned; there was no nuclear sub, no threat. Seizing the opportunity to find out what “he” had been plotting with Patti, Kevin had her spell it out to Meg: On the seventh anniversary of the Sudden Departure, they were going to launch a nuke, Russia was going to retaliate, and kaboom! Everyone on the planet would be vaporized! 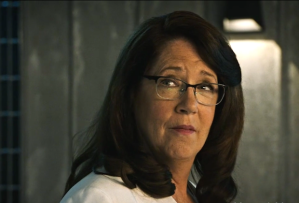 ‘HE’S MY IDENTICAL TWIN BROTHER’ | Patti reminded Kevin that this was what the American people had elected them for: “They want to die.” Regardless, they couldn’t launch, Meg noted, without going through the Fisher Protocol, which required Kevin to murder the volunteer in whose chest the launch key had been embedded. And not only wasn’t the volunteer present, there was no way he’d gain admittance to the bunker. Unless… that’s right. The volunteer would be entering in 15 minutes, Patti said, and he’d be able to because… he’s Kevin’s twin. Thwarted, Meg left to put her affairs in order, and Patti had Kevin take them from DEFCON 3 to 1 before allowing him to make his call. Or, rather, pretending to allow him to. The phones in the situation room didn’t work, and DEFCON 1 had put them into lockdown. To escape the room, Kevin looked into Patti’s glasses and was transported into the body of no-beard Kevin, who smelled a rat but was reassured by the bridge guy in his earpiece that he had a man on the inside. When Kevin was cornered by Secret Service, he (and we) learned that the “man on the inside” was Meg. Why was she helping him? Didn’t she want the end of the world like all the rest of the GR? No, she replied. “They say they don’t believe in love, [but] I’m in love with the most wonderful man I have ever known.” Who? “His name is God!” After bridge guy asked Kevin to “tell her I love her, too,” our hero learned from Meg where the comms room was and shot her. During his call with Christopher Sunday, the prime minister asked why, if Kevin didn’t believe that his father could save the world with a song, he was there. Just then, Secret Service found Kevin, so he looked into some glass and returned to the president’s body.

In the situation room, President Kevin smashed Patti’s glasses and declared, “I don’t want to do this anymore” — any of it, the pretending they’re the president and defense secretary, none of it. What did he want, then? Patti asked. “I want to go home,” he answered. As she noted, he’d said that before, yet he kept showing up there. Sounded to her like somebody has issues. When no-beard Kevin was brought in, Patti treated the brothers to a personalized version of the theme from The Patty Duke Show, then explained how the prez was to extract the key from his twin. “May God have mercy on your soul, if there is a God,” she added. “Which there is not.” At first, both Kevins refused to go through with it. So Patti had the president read from the romance novel both he and his sib had written. The gist: The protagonist had been terrified of the woman he loved, of loving her and being loved by her. It was a nightmare for him. So “all he knew to do was run.” Once he had, “he was alone, and all was well.” As both Kevins quietly wept, No-Beard said that he wanted the key removed after all — “so we can’t ever come back here again.” As he lay dying at his brother’s hand, he looked up at his own mirror image and acknowledged, “We f—ed up with Nora.” After the key was turned and doomsday begun, Patti suggested that she and Kevin go outside to watch. There, they — and, horrifyingly, we — saw missiles heading for D.C. and, finally, the end. A blast of white light. Awakening in a tarp in Grace’s church, Kevin found John and Michael sleeping nearby, and his dad on the roof of the house. “I thought you were gone,” Kevin Sr. said. It had been raining so hard, and he’d been scared, so he’d come up to the roof (and still wasn’t ready to come down). He did have a question, though: “Now what?”

So, what did you make of “The Most Powerful Man in the World”? Did Kevin stop the apocalypse? Was there ever going to be one? Is anyone not confused at this point?