Need to catch up? Check out the previous Twin Peaks recap.

Do you think, way back when Kyle McLachlan signed on to play Twin Peaks‘ buttoned-up Agent Dale Cooper, he could’ve imagined a time when the most interesting thing he’d do in an entire episode would be a spit take?

Yeah, yeah, I know. Because it’s a David Lynchian spittake, it’s elevated to high art. The spittake has meaning that I just don’t understand. It’s a callback to Season 1, when Coop & Co. all were standing outside by the chalkboard outside. All will be revealed. The owls are not what they seem. Cool. Cool.

Anyway, in addition to Good-but-Addled Cooper’s “Dougie” making contact (and having breakfast) with his concerned family in “The Return: Part 4,” we get an update on the FBI side of things (including an appearance by one Denise Bryson) and we meet Andy and Lucy’s kid, who’s a hoot.

FAMILY BLAND | After a colleague recognizes “Dougie” at the casino and happens to mention where Coop’s doppelganger lives, Good Cooper takes a limo home. Dougie’s angry wife meets him in the front yard: Her husband has been gone for three days, and he missed their son’s birthday. (Side note: The kid is named Sonny Jim.) (Another side note: For the love of God, how much of a dolt was Dougie that no one notices that now he’s just parroting the last couple of words said to him?)

Dougie’s wife’s anger is ameliorated when she realizes he’s clutching a laundry bag-sized stash of cash — his casino winnings. “There’s enough to pay them back,” she says, relieved, though we don’t get any more clues about to whom she refers. 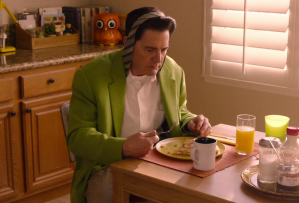 The next morning, Coop sees a vision of the One-Armed Man in the Black Lodge. “You see me, don’t you?” the man asks, adding, “You were tricked.” He brandishes the gold marble that once was Dougie. “Now, one of you must die,” he warns before fading away.

I hope that will shake Cooper out of his fog, but it doesn’t. There’s some silliness involving him peeing a lot and not knowing how to dress himself, then he comes down to breakfast with Dougie’s highly amused son. The only thing that seems to generate a strong reaction is when Mrs. Dougie serves him some hot coffee, which Coop gulps and then, as mentioned above, spits all over the floor in glee. 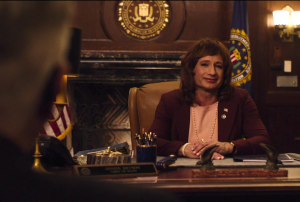 BLUE ROSE IN BLOOM | Gordon visits Denise (neé Dennis) Bryson, who’s been promoted to chief of staff of the FBI. Get it, mama! She warns him about bringing Tammy — the younger, female agent we met earlier in the revival — along when he goes to South Dakota to investigate Cooper’s reappearance, insinuating that he has a predilection for fine, young things. But Cole reasserts that Tammy “has the stuff,” and Denise wishes him luck. I’m pretty sure the only point of this scene was for us to see David Duchovny in drag again, but I’m not complaining.

When Gordon, Tammy and Albert arrive in South Dakota, the “Cooper” they see is Mr. C, aka Evil Coop. He’s pretending to be good Cooper, and he spins a story about how he’s been working undercover in league with Phillip Jeffries all this time, and how he was juuuuuuust about to come tell them everything when he got into his car accident. His delivery is so odd, even for this show, and Gordon and Albert are troubled when they discuss the matter later.

“Do you understand this situation, Albert?” Cole asks, and the other agent replies that he does: “Blue Rose,” he replies, which is also what Maj. Briggs’ head said to Cooper in the starry void at the beginning of the previous episode. Also of note: Albert authorized Phillip to give Cooper some information years ago, and that move led to the death of a key FBI player in Colombia. Long story short, Gordon and Albert agree that they need “one certain person” to take a look at the captive Coop. Albert doesn’t know where she lives, he says, “but I know where she drinks.”

A MONOLOGUE YOU CAN’T REFUSE | Guys, did Lucy have a stroke in the years between the original series and now? Because apparently, she cannot understand how mobile phones work. And when the Sheriff Truman who was fishing — and who is not Harry — shows up at the precinct, even though she thought he was in the mountains, she literally falls out of her chair.

Hawk is still re-investigating Cooper’s disappearance; as he does so, we learn that Bobby Briggs is now a sheriff’s deputy (!) whose beat is drug routes from Canada (!!). He seems to be pretty grown up and responsible, but when he sees the beauty queen photo of Laura among the evidence, he breaks down and cries right there in the conference room. We also learn that Cooper was the last person to talk to Bobby’s dad, the major, before he died in a fire, but Bobby doesn’t know what they talked about. 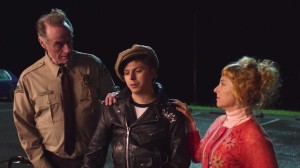 And then, the best part of the episode happens when Andy and Lucy’s son, Wally Brando (played by Arrested Development‘s Michael Cera, decked out in full Marlon Brando-in-The-Wild-One gear) shows up to “pay his respects” to Sheriff Truman. He never breaks out of his Brando impression during his long, rambling monologue, and the whole thing is bizarre in that Season 1-Twin Peaks way: strange for no reason, but fun and brief. (Side note: The way Cera has Wally pronounce “Caucasians” made me laugh out loud.)

Your turn. Weigh in on the episode in the comments below!