Warning: The following may contain too high a dose of spoilers for readers who’ve yet to watch Thursday’s Grey’s Anatomy finale. Before proceeding, consult an M.D. or your DVR.

Grey’s Anatomy viewers might have been shocked — and relieved — when the Season 13 finale revealed that Stephanie hadn’t been killed by the preceding episode’s climactic explosion. But “I knew” there was still more to come, Jerrika Hinton tells TVLine. “My exit has been something that [series creator] Shonda [Rhimes] and I have talked about for almost a year now, so there were no surprises.” Here, the actress, who’ll next appear in Alan Ball’s forthcoming HBO series, shares her thoughts on her spunky character’s sendoff — and likelihood of returning — and reveals how fired up she got doing some of her own stunts.

TVLINE | What was your reaction to Stephanie’s last act? I was glad that, if she had to go, at least she got to leave a hero.
I think it’s a delicate, nuanced kind of hero’s journey that [she’s been on this season, one that] you don’t often see in this genre. It’s been about self-actualization and the fact that she is in a line of work that encourages repression and distance, and, at the same time, still asks that you give every single ounce of yourself that you have to give. She was sacrificing herself. She began the season with no space to process her loss [after Kyle’s death] and immediately jumped back into work because it was a reliable thing that she knew. And when work became unreliable, she drifted even further until she was sacrificing her well-being for a place that it can be argued would not have done the same for her. These were conditions that, in hindsight, were figuratively and literally burning her out. She needed to not only see that but make a healthy decision about how to move forward.

TVLINE | And if, in a year or two, she feels differently, she could always come back, right?
I would say, after the way the episode ends, it would be very difficult for Stephanie to practice medicine again in the way that she had become accustomed to. Personally, I’m just glad she gets to leave having made her mark.

TVLINE | Speaking of marks… how bruised up were you after two episodes’ worth of stunts?
[Laughs] I’m still recovering physically from that, and we finished [the finale] probably a month ago!

TVLINE | How much of it did they actually let you do?
There’s a fair amount that’s me. My lovely stunt double did some of the jumping through fire, and there was one specific shot that they absolutely would not allow me to do — where a piece of the ceiling comes crashing down in front of Stephanie and Erin. They were adamant about that. I haven’t seen the episode yet, but I would say that I’m probably going to be confused as to which shots are me and which are [my stunt double].

TVLINE | Looking back over your five seasons on Grey’s, what was your favorite storyline?
I would say this one. It touches on things that are dear to my heart, and I think it’s always valuable to see someone that the audience may hold in high regard evaluating their priorities and just taking stock of how they want to move through the world, how to live the life that best serves them. It’s a very Oprah-fied way of looking at the world, but it’s also crucial. And as someone who is a huge advocate of therapy and mental health, I think there are elements in the story that are universal. 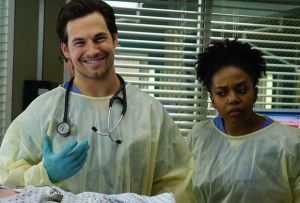 TVLINE | Anything that you didn’t get to do storywise that you wish you had? I was sorry they never hooked up Stephanie and DeLuca.
[Laughs] You weren’t the only one! I saw that on Twitter quite a bit! To be honest, I haven’t even gone there. My time on Grey’s Anatomy… it’s been so many things, and it has opened up so many other things to me, that, at the end of this time, I can’t even look back on it and go, “But you know, if only this one thing!” I’m not trying to be pie-in-the-sky Pollyanna. I am genuinely incapable of looking back on my time that way and thinking with “If only… ” reservations.

What did you think of Stephanie’s sendoff? Hit the comments.