Once Upon a Time creators 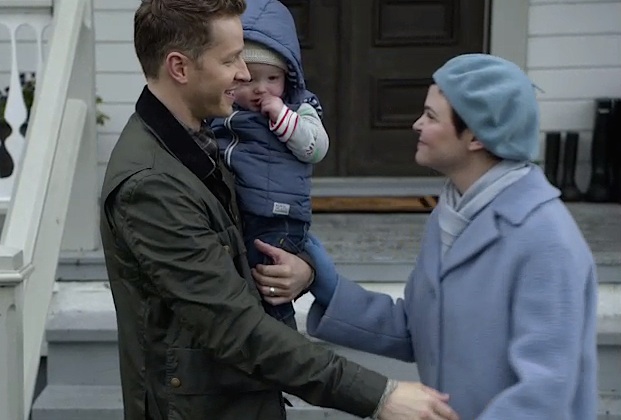 Adam Horowitz and Eddy Kitsis spoke with TVLine about folding their series-ending vision into the Season 6 finale, their favorite moments from the crowd-pleasing closing montage, and what sort of adventure awaits grown-up Henry and his mystery daughter!

TVLINE | Right off the bat, I have to say that end-of-finale montage was fantastic. I’m still recovering from it.
EDDY KITSIS | Thank you.

TVLINE | Like, I literally had tears forming in my eyes.
ADAM HOROWITZ | That was the goal.

TVLINE | I’m curious, what were your favorite moments? There were so many fun little things going on there.
KITSIS | No. 1, that we got through almost an entire act without dialogue. Two, I loved seeing Josh [Dallas’ Charming] on the farm. You know what? Each moment I loved. We’d been thinking about each one of these moments for over a year, so to actually see something that you’ve been waiting a long time to see was really cool for us.
HOROWITZ |  To echo that, I feel like one of the goals that we set with the montage was to really try to do an almost-wordless act, where you just had images of these characters. And seeing not “happy endings” but their lives continuing. As a whole, that’s what really got me the most and made me the most satisfied, because it’s not just the individual moments, it’s how they stack up together. When you’re seeing Snow and Charming together, 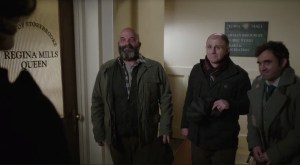 TVLINE | That was on my Top 3. The dwarfs unveiling the “Queen” door; the arrow landing next to the Evil Queen, with the ring/proposal attached; and Violet waiting for Henry by the bus.
KITSIS | I wanted to do the Streets of San Francisco/Kojak [police] light-on-the-Bug since the pilot, and this was the last opportunity to do that. That was something we’ve wanted to do and at the last minute said, “Wait….”

TVLINE | Was there anything you wanted to include but because of time just couldn’t?
KITSIS | No,  we really made sure we got what we wanted.
HOROWITZ | It just felt right to us, and hopefully the audience will agree. These were moments that we really wanted. Seeing Henry go back to school, 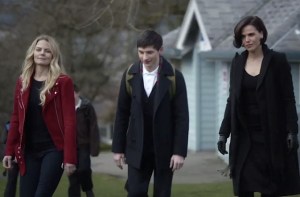 with both his mothers; and then culminating with everybody at that table together. This is what the show has been about, a crazy, mixed-up family.

TVLINE | Back in December I asked you how the series would end. You said you had “the entire last act and final image in mind,” and “everyone will know when they see it.” Did you go ahead and play that card here, with the montage and Lucy knocking on Henry’s door there in Seattle?
KITSIS | That’s exactly right.

TVLINE | When I first got wind that Andrew West would be playing Adult Henry opposite this 10-year-old girl, I entertained the possibility that this is where you’d go — have a little girl knocking on a grown-up Henry’s door. 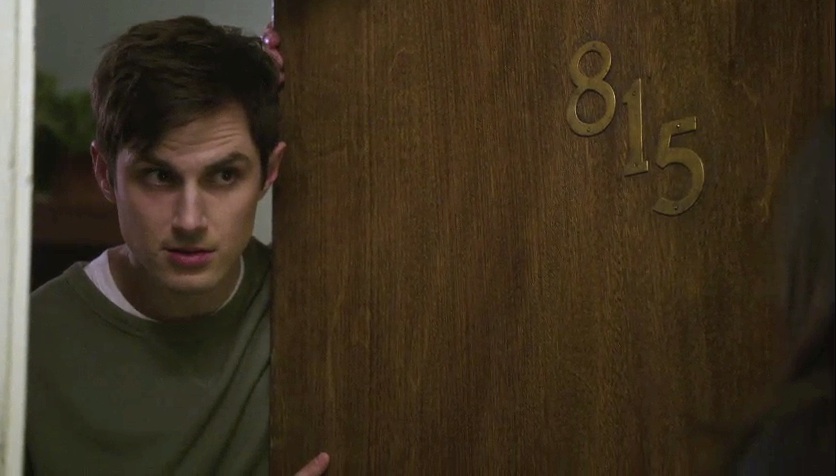 And to me that seemed like a really organic, logical way to continue the show. The word “reset” has been tossed around regarding Season 7, by myself included, and some people can read that as meaning “dismissive of” everything that came before. But in this case, it’s about a new story informed by everything that came before it.
KITSIS | That’s exactly right. That’s why Henry, who has the Heart of the True Believer, is leading the next chapter. This chapter of the book felt like it needed to be completed, but the idea of fairy tales in the real world, and the real world needing to have hope, and people needing to find that, is still very relevant and personal to us. So we felt like Henry was the perfect person to lead us into the new chapter.

TVLINE | Would you say the finale’s opening Henry/Lucy sequence gives a better sense of what Season 7 will look like, more so than the final scene?
KITSIS | I would say that both are indicative.
HOROWITZ | As has been the shows’ modus operandi all along, there are different things going on all at once, all the time.

TVLINE | Steveston [where Storybrooke exteriors are filmed] will always be there for you.
HOROWITZ | [Feigning anger] Where’s my key to the city??

TVLINE | Considering the cast we do have around full-time next season [in the wake of six total exits], would you say we’ll be seeing their Enchanted Forest selves more than the Storybrooke versions?
KITSIS | I wouldn’t necessarily say that. Obviously a lot of time has passed, between Henry looking like Jared [Gilmore] and now Andrew West, so we will be picking up with these characters and where they’ve been and what they’re doing. And what their next chapter is going to be is a bit of what next year will be.
HOROWITZ | Time’s a funny thing on Once Upon a Time. Let’s leave it at that. 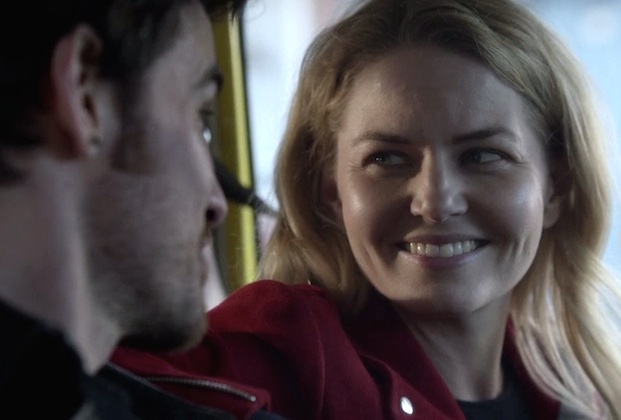 Emma and Hook obviously just came off their wedding — I loved that line, “Some honeymoon!” — and even though the fans of that couple won’t be getting them full-time next season, might Henry’s mission partly be in service of preserving the happy ending that they worked so hard for?
KITSIS | Listen, when we left Henry and he was on that school bus, he’s just in ninth grade, right? When we see Henry later, understand that like any kid, when you turn 18, 19, you want to leave home. So I think that Henry is not out on a mission on behalf of the happy endings his family has earned; Henry is out to make his own story. And what we’ll find out is what happened [to everyone]. As Lucy said at the end, “Your family needs your help,” so clearly at some point he must have reached out to them and at some point they came. But really, it started with Henry wanting to leave home. Perhaps he fell in love and has his own true love, because clearly he’s had a daughter, so “Who is Henry’s wife?” and that love story is going to be a big part of next year as well.

TVLINE | A-ha, so he married Lucy’s mom….
HOROWITZ | It could be a common law situation!

TVLINE | But if you were to share some sort of message with “Captain Swan” fans…?
HOROWITZ | I would say this: To the Captain Swan fans, and to fans of romance and love: Hook and Emma ended the season in love and in a beautiful place. We meant what we showed at the end, which is the two of them in a very good place. That’s an important thing for both of those characters’ journeys over the six seasons of the show, and we really wanted to have that feeling that they had found each other and were going to go on together.

TVLINE | They’re in love, in the Bug, they got the cherry on top, and they’re out fighting crime!
KITSIS |  Yeah, they’re investigating — sheriff and deputy!

What did you think of the Season 6 finale, and the set-up for next season?