ABC’s Once Upon a Time closed a six-season chapter with Sunday night’s finale, before cracking the binding on a brand-new adventure involving a familiar-ish face. Read our recap, then click over to our Q&A with the series creators, who offer a peek at what Season 7 holds.

With the Black Fairy’s extra-dark curse cast after Emma and Hook said “I do,” Henry woke up in a Storybrooke where Emma had been committed for believing in fairy tales-come-to-life, while Fiona was mayor/his other mom. Regina, Snow, David and Hook meanwhile found themselves in the Charmings’ TEF palace, before hot-footing it to the Evil Queen’s castle to join forces with Regina’s other half. Upon Zelena’s arrival with one of the Mad Hatter’s other hats, they traveled to the hub that joins all the realms, only to realize that Emma’s lack of belief back home was causing all the worlds to crumble.

Anxious to return home to Emma, Hook set out to climb the beanstalk and pinch one of the giant’s magic beans, which he did with David’s help. And while they dodged a dragon, their journey down to the ground was not without incident, as the churning dark curse caused them both to tumble hard, as the stalk crashed.  And though they both survived (David, thanks to a pilot-paralleling kiss from Snow), the bean’s magic got sapped by the curse. 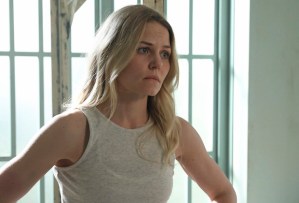 With no way out, the Evil Queen volunteered to hold off the curse as long as she could, while the others huddled in the center of the gradually enveloped courtyard. The curse fell short of consuming them, though, as Emma back in Storybrooke agreed to believe Henry’s version of events, after his handmade mini-storybook led her to bail on her bail bondswoman encore.

Fiona meanwhile realized that Rumple, from whom she took away and hid Belle, in fact has been “awake” this whole time. She invited him to ally with her, to live in a world where their power would be unchecked, even by the rules of magic that for so long have kept Baelfire from being resurrected. Rumple doesn’t fall for her come-on, though, and instead grabs her wand to vanquish her, into a pile of dust. The Black Fairy’s handiwork lived on, though, having tasked Gideon with killing the Savior — and no commands directed at his plucked heart can stop him. Emma mulled her options with her returned family and husband — to either sacrifice herself, and thus the light, or to kill Gideon, and in doing so lose her own light.

Emma chose the former, allowing Gideon to slay her on Main Street amid much glowy sparks and what not. And though Emma was felled, True Love’s Kiss from son Henry revived her — as well as restored the incinerated storybook. Gideon meanwhile returned to baby 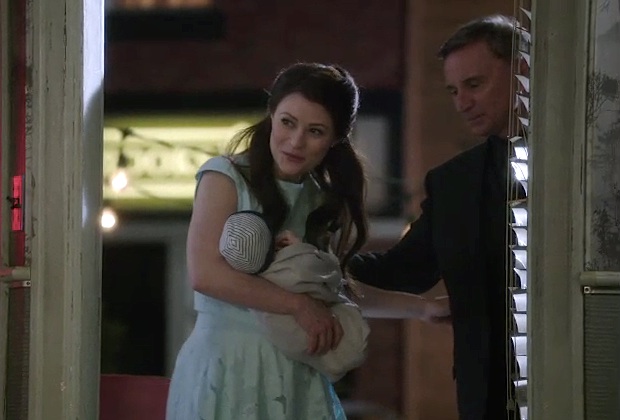 form, much to a reunited Belle and Rumple’s delight. From here, they now can live on doing what they love, knowing that happy endings exist, Snow observes. “An ending isn’t happiness; being together is.”

Cue a sprawling montage where the Charmings go about living life on a farm/back teaching, the dwarfs gift Regina’s mayoral office with a royal upgrade, Henry returns to that thing called “school” and sheriff Emma deputizes Hook.

We then leap forward some years, where Lucy — a little girl we glimpsed in the finale’s cold open, where she and her dad struggled to safeguard the storybook in the Enchanted Forest — knocks on an apartment door in Seattle. Who answers but her dad aka Henry Mills. Henry claims he doesn’t have a daughter, but Lucy has pressing business for the young man, seeing as his family needs him….

Click on to Page 2 for our Q&A with Once Upon a Time creators Adam Horowitz and Eddy Kitsis, to discuss what we just saw — and what it all means for Season 7.