Well, at least Meredith and Nathan got to smile a little. Otherwise, Thursday’s penultimate Season 13 episode of Grey’s Anatomy was a pretty tense affair, one that put Grey Sloan into lockdown, landed Stephanie not just in harm’s way but in its grasp, sent Jackson on a massive guilt trip, reduced Owen to tears and had Alex staring down a demon. How did it all shake out? Make yourself comfy on the edge of your seat and read on!

‘I LEFT HER IN THE ROOM WITH HIM’ | As “True Colors” began, Meredith realized that — oops — she’d accidentally let Nathan sleep over, so she had him sneak out without bumping into her kids for the first time. Meanwhile, at Owen and Amelia’s, Hunt learned that Megan was… umm… we didn’t know at first, because the sound was muted on the military personnel who came knocking with news. But it certainly left him shellshocked, whatever they told him. At the hospital, Stephanie reported back to work, having gone to therapy three whole times and “barfed up all my childhood sadness.” Richard was skeptical but still OK’d her for duty. Alex called Mer from L.A., where he was stalking Jo’s doctor husband, Paul Stadler (Matthew Morrison), at a medical conference. Among the patients du jour was a couple who seemed to have been having intercourse when they popped the brake on their parked car, and a choking baby, whom Owen, still numb from whatever he’d learned, roughly but successfully treated. 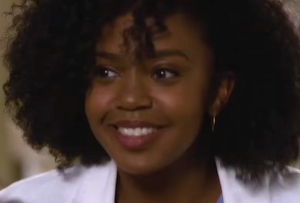 To punish Stephanie for speeding through counseling, Eliza stuck her baby-sitting Keith, the unconscious man injured in the sexmobile crash. When he awakened, Jackson and Stephanie assumed he was concerned about how long the woman, Alison, would be in surgery because he was concerned about the woman, period. Since Alison, when she briefly came to, had asked about him, Maggie guessed that they were in love. Later, Stephanie found Keith trying to free himself from his IVs, and let him talk her into taking him to be present when Alison awakened. When she did come to, she revealed to Bailey, Jackson and Maggie that Keith had been forcing her to drive to the woods so he could rape her, so she’d hit the gas and caused the accident. As Stephanie innocently wheeled Keith out of his room, Bailey put the hospital into lockdown, and Jackson started down a guilt spiral. Maggie assured him that, with all the cops around, they’d be found soon enough. But he wasn’t hearing it. Not at first, anyway.

‘AT LEAST NOW YOU KNOW’ | Although the choking baby was fine, the parents asked Amelia to bring Owen to them; they wanted a word. When Mrs. Hunt found her estranged husband, he snapped at her for delivering the message. He then snapped at the parents, in spite of the fact that all they’d wanted to do was thank him for saving their daughter. Following Owen into a supply closet, Amelia learned from him that the soldiers had told him they found Megan. “Maybe you can find some peace,” she said. To which he responded, “They said that she’s alive!” (Yay — more Bridget Regan!) Before he filled in his mother, he wanted to find out if it was really her. “Let’s find out,” said Amelia, being there for her mate for the first time in ages. Later, she arranged for Megan to be transferred to Grey Sloan and called in a PTSD specialist, as much for Owen as his sister. And he was gonna need it — he was already beating himself up for believing her dead while she was being held and tortured for a decade. “I gave up on her,” he wept. 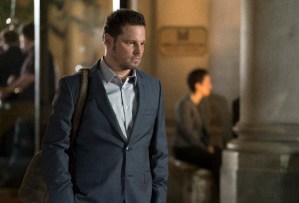 ‘I WILL FIND YOU, AND I WILL KILL YOU’ | In L.A., Karev introduced himself to Paul as a fan, Alex Stevens (ha), got him drunk and then, once outside the hotel, announced, “This is from your wife!” and beat the crap out of him. Only when Alex wound up back behind bars did he snap out of the fantasy! Later, he approached Paul and said he was a friend of his wife Brooke. “I know who you are, and I’m watching you,” he warned. This reverie ended with Alex imagining Paul tracking down and killing Jo. So, yeah, also not a great plan. Finally, Alex almost ended up sharing a taxi with Paul but passed on the opportunity. (What was with that backward glance Paul gave Alex, though? Did he recognize him? How?) 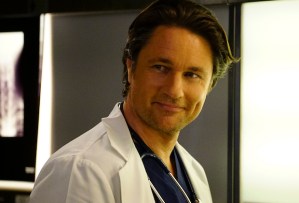 ‘SHE’S TROUBLE’ | While the choking baby was recovering, Nathan dealt with her older sister so sweetly that Meredith invited him over that evening to meet her youngsters over dinner. “You seem to like kids, they seem to like you,” it’ll be fine, she predicted. He could even stay for awhile after she put the kids to bed. “For awhile.” Later, she panicked, and Amelia, of all people, talked her down. “Look at you being the sane one!” Grey marveled. That night, Mer came home to find Owen with Amelia, heard the news about Megan and set out to tell Nathan immediately. (And thus concludes the smiley portion of their storyline.)

‘I DON’T LIKE HIM’ | As the episode drew to a close, Keith overheard that a rapist was being sought in the hospital, drew a scalpel and forced Stephanie to show him the way out of the hospital — right past Ben, even. With every step, Keith seemed to get scarier — he even drew blood by pressing the scalpel against Stephanie’s throat. A chance encounter with the choking baby’s sister might have given Edwards a chance to escape, but because by then, the hospital was in lockdown, neither she, Keith nor the little girl, Erin, could get out of the corridor the way they’d come in. Or at all. While Maggie reassured Jackson that Stephanie would be OK — what do we think of their chemistry test, BTW? Did they pass? — Keith plotted to set a fire to trigger the sprinklers and get the lockdown called off. When he added that he’d be running out of the hospital with Erin — because who’d stop a guy carrying a kid out of a burning building? — quick-thinking Stephanie doused him with the liquid he was using to start the blaze, and poof! Up in smoke he went. Unfortunately, he collapsed near oxygen tanks (or was it nitrogen?). With Erin stashed in an adjacent room, Stephanie ran out to try to stop the inevitable explosion. Only it really was inevitable, and left it seeming highly unlikely that she survived.

So, if this is the end of Stephanie, what do you think of her hero’s sendoff? Were you surprised to learn that Megan was alive? Were you liking Jackson and Maggie’s chemistry — or sensing any? Hit the comments.