A pair of turf wars heated up this week on Better Call Saul — and both Jimmy and Gus Fring are willing to bend the truth in order to gain ground.

Mike sits in his car, watching Hector’s ice cream shop get raided by the DEA after last week’s sneaker-shooting frame job. Hector’s not too happy about it, either: He storms into Gus’ Los Pollos Hermanos with his goons and intimidates everyone in there, lighting up a cigar and helping himself to a fountain soda. By the time Gus arrives, every customer has fled and his employees are huddled together like hostages. He sends them home and finds Hector waiting for him in the back office, puffing away on that cigar, his feet up on Gus’ desk.

Gus reminds Hector that the cartel wouldn’t want him interfering with Gus’ legitimate business, but Hector scoffs at him: “I am the cartel… and from now on, you are my mule.” With Hector’s trucks now out of commission, he orders Gus to “make room” on his trucks for Hector’s product. “Did Don Eladio approve this?” Gus asks. Hector laughs: “I approve this.” He gets right up in Gus’ face on his way out, and underlines his point: “You are doing it.” Gus doesn’t argue, but the next day, he lies to his employees, telling them he stood up to Hector, and they won’t be bothered by him again. That last part might be true, though…

Because Gus likes the way Mike handles his business. Victor arrives at Mike’s toll booth with a paper bag of cash as payment, but Mike refuses to accept it: “Tell him we’re square,” he tells Victor. So Gus makes his own trip to Mike’s toll booth, where Mike tells him he’s just happy to be done with Hector. Gus wonders if Mike would be willing to come work for him. “Could be,” Mike says. “That’d depend on the work.” Hmmm… this might be the beginning of a beautiful friendship.

But before they part ways, Mike asks Gus why he left that “DON’T” note to stop Mike from killing Hector. Gus’ answer is direct — and chilling: “A bullet to the head would’ve been far too humane.” 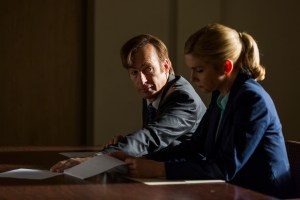 DRILL, BABY, DRILL | Over in Jimmy’s neck of the woods, Kim is cold-calling contractors out of the phone book, trying to find out who’s coming to fix Chuck’s broken door. She finally finds the right guy and cancels the appointment so Jimmy can send in Mike instead, posing as a handyman. Mike promises Chuck he won’t use anything that plugs in… but then he pulls out an ear-splitting battery-powered drill, which sends Chuck cowering in another room. With the coast clear, Mike snaps a few photos of Chuck’s place — with a disposable camera, no less! (Mike Ehrmantraut: lifelong enemy of modern technology.)

Jimmy’s pleased with the photos Mike got (“You, my friend, are the Ansel Adams of covert photography”), and Mike even passes along something he found in Chuck’s address book — although we don’t see what it is. Jimmy asks Mike how Chuck seemed to him, but Mike isn’t up for any heartwarming “feelings” talk: “Isn’t our business concluded?” To be honest, Jimmy, you should’ve seen that one coming.

Later, Jimmy and Kim face off against Chuck and Howard to resolve Jimmy’s criminal case. Jimmy agrees to the pre-prosecution diversion deal — which could lead to Jimmy’s disbarment — and doesn’t argue when Chuck asks for two dollars more in restitution to replace the cassette tape Jimmy destroyed. He even apologizes to Chuck, at the prosecutor Miss Hay’s urging. His words sting, though: “No one should treat his own brother like that. Not ever.” 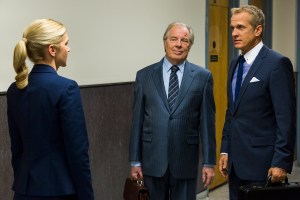 And the McGill-Wexler dynamic duo still have a few tricks up their sleeves. After the hearing, Kim informs Chuck and Howard she’ll be working to suppress the tape of Jimmy’s confession at his disbarment hearing. She knows Chuck has another copy of the tape, and he admits as much, saying it’s safely under lock and key. When Kim rejoins Chuck, she says with a smile, “Bingo.” So Jimmy’s gonna owe Chuck another two dollars pretty soon, huh?

* “Sabrosito” kicked off with a flashback to drug kingpin Don Eladio’s palatial estate. Hector presented Don Eladio with bundles of cash from selling meth, but Gus’ middleman Juan Bolsa impressed the boss with neatly organized bricks of cash that dwarfed Hector’s haul. Eladio even teased a clearly annoyed Hector: “Gustavo’s is bigger than yours.” Of course, all you Breaking Bad fans remember Don Eladio’s pool from Season 4’s flashback to the murder of Gus’ business partner Max… and Gus’ eventual revenge, with the help of poisoned tequila.

* Speaking of Don Eladio’s pool: Did the opening underwater shot make anyone else think a pink teddy bear with one eye was about to float by?

* Francesca’s folksy phone-call snippets are still a weekly highlight: “Pomeranians can be difficult. All that hair.”

* Pretty sure the movie Mike was watching with little Kaylee asleep on the couch was The Mouse That Roared, the 1959 Peter Sellers political satire about a tiny country that acquires a very lethal bomb. (But did you have to ring a bell to detonate it?)

* When Hector and his men walked out of Los Pollos Hermanos, Nacho definitely gave Gus a significant glance. Is that a hint that Nacho’s going to betray Hector and come over to Gus’ side… if he hasn’t already?