Jimmy has a fool for a client this week on Better Call Saul, as he looks to represent himself in court after his brotherly tiff with Chuck.

Following last week’s ambush, he calls into the office and tells Francesca to push back all his appointments — since, you know, he’s expecting to be arrested any minute. He sits on the curb outside Chuck’s house, despondent, and Chuck comes out to tell him he’s pressing charges against Jimmy for his own good: “You won’t want to hear it, but this is for the best… you’ll come out the other side a better man.” Jimmy responds by saying one day, Chuck will get sick, and they’ll stick him in a hospital bed and hook him up to all kinds of evil electronic machines, and “you will die there… alone.” So… good talk! 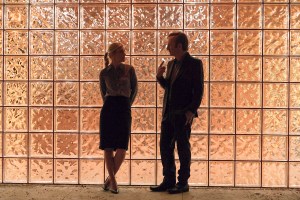 Jimmy gets hauled into the police station and booked, photographed and fingerprinted. A prosecutor he’s worked with in the past, Bill Oakley, ducks his bald head in to laugh at him: “How the mighty have fallen.” Jimmy has to spend the night in jail, and the next morning, the judge assigned to his case recognizes him. He insists on serving as his own lawyer, even after Kim bursts into the courtroom mid-hearing. (She heard the bad news from Ernesto.) Jimmy waves her off, and once he’s bailed out, gives Kim a big speech about how he doesn’t want to involve her in his mess when she has Mesa Verde to worry about. She responds with a terse “OK”… which isn’t exactly reassuring.

Determined to turn on the charm, Jimmy shows up at court with a delicious burger and fries and plops down next to Oakley, chatting him up about his case. Oakley says he’s not handling the case, though; he’s been “conflicted out,” and they’ve brought in a lawyer from out of town. (Jimmy still gives him the burger anyway.) This out-of-town lawyer visits Chuck for a quick pre-trial interview, and Chuck assures her he’ll testify in court, despite his ailments. But he gets choked up, too, telling her “Jimmy has a good heart.” He wonders if, rather than throwing his brother in jail, there might be “a better solution… for everyone.”

Kim joins Jimmy for a late-night smoke outside, and he tells her he received a plea offer, but it’s “not what I expected.” It calls for pre-prosecution diversion, which means no jail… but he’d have to confess to a felony in writing, which could get him disbarred. This was Chuck’s plan all along, Jimmy theorizes: “He’s got me boxed in.” But Kim tells him he’s not alone, taking his hand and vowing to help him fight this. So Jimmy decides to take that plea offer and “shove it right up Chuck’s ass.” Game on.

Now let’s check in and see what Mike’s up to in “Sunk Costs”: 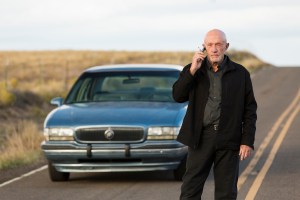 IT’S GOTTA BE THE SHOES | Back on that abandoned desert road, Mike answers the cell phone that was ringing last week, and it’s Gus Fring, telling him to expect two cars “momentarily.” A pair of black SUVs approach from opposite directions, and when Gus gets out of one, Mike asks him about the “DON’T” note. Gus says simply, “It’s not in my interest for Hector Salamanca to die at this time.” (Heh.) He’s impressed with Mike’s work, though, and says if he wants to continue messing up Hector’s business, Gus wouldn’t mind. Mike susses out that Hector is Gus’ competition, and he seems open to teaming up with the Chicken Man.

So Mike hatches an elaborate scheme to mess with Hector where he picks up illicit drugs from a Mexican pediatrician, stashes them in a pair of high-top sneakers he flings over a telephone wire, and then waits with a sniper rifle for Hector’s men to drive by in their Regalo Helado truck. When they get out, Mike fires a few warning shots into the air, enough to convince them it’s just hunters. But as they drive off, Mike fires a bullet into the dangling sneaker, spilling white powder all over Hector’s truck. At the border, Hector’s guys get arrested when drug dogs sniff the powder all over their truck… and Mike completes his first mission for Gustavo Fring.

* The song playing while Jimmy’s getting booked at the police station: Little Richard’s cover of Peter, Paul and Mary’s “Hurry Sundown.” Makes sense, since Jimmy wanted that day to be over as soon as possible.

* Loved seeing that montage of Kim’s dorky morning routine: She wakes up at 5:30 am, hits the gym, drips some Visine into her tired eyes… I’m really rooting for her to not be collateral damage in Jimmy’s inevitable downfall.

* Again, smarter viewers than me picked up on the fact that new receptionist Francesca was still Saul Goodman’s receptionist in Seasons 4 and 5 of Breaking Bad. She threatened Walter White with pepper spray!

* One lingering question I have for Season 3 so far: No Nacho? I haven’t seen any Michael Mando at all in the first three episodes… but I’m assuming he plays a big role in the Gus vs. Hector war that’s clearly on the horizon.