All together now: Finally! In Thursday’s Grey’s Anatomy, Maggie at long last wised up about Nathan and Meredith. But did she, as Grey predicted, hate her half sister for getting the guy? Read on and find out!

‘IS HE A GOOD KISSER?’ | As “Don’t Stop Me Now” began, Meredith was anticipating Maggie reacting badly to the revelation that she and Nathan were becoming a couple. Her practice round, she suggested to Alex, “sounds forced because I’m a horrible person.” As the new duo took center stage at a press conference to discuss their “In the Air Tonight” heroics, Riggs quickly clarified that “she is your story, not me.” And the way that he touched her shoulder when he said it told Maggie all that she needed to know. After the Q&A sesh, Pierce replayed her video of it, analyzing the gesture, and ignored Mer’s call. “Did I miss anything” at the press conference, Jackson innocently asked as he and Maggie scrubbed in. Oh yeah — a lot. When Grey caught up with Pierce right before surgery, Maggie shut her down and out.

Later, Mer was filling in Alex when Pierce approached, suddenly full of questions, starting with, “Did you join the mile-high club?” Quickly, it became obvious that no answers Mer could give would placate Maggie, who skedaddled rather than accept her sis’ invitation to discuss the matter in private. Finally, Grey explained that she and Nathan had happened before Owen and Amelia’s wedding, before she’d even known that Maggie liked Riggs. “This isn’t about Nathan,” Pierce cried. It’s about Mer lying to her and doing the wrong thing by lying when she meant to do the right thing. And it was especially about the fact that “you’re all I have left,” Maggie sobbed. That night, Mer apologized again for hurting her sis and insisted she wasn’t about to lose her over a guy, whether she liked it or not. “I’m still mad at you,” Maggie said. But they were nonetheless headed out for a girls’ night with Amelia. #progress

‘YOU’RE ABOUT TO DE-WORM ME… NO ONE’S EVER TOUCHING ME AGAIN’ | In the ER, a young woman named Mary — aka Sugar Bear and Dumpling — puked up the breakfast her boyfriend Dennis had made her on April. By the time she’d cleaned up, Stephanie was ready to upchuck herself over the PDAs. Turned out, Mary was full of, as Richard put it, “a whole lotta worms.” On the plus side, at least the revelation turned off Dennis enough that he stopped being so nauseating. (BTW, were those real worms? As Stephanie said, worms… deal-breaker.) As the episode neared its ending, Dennis apologized for “being weird,” and he and his “love bug” reunited. Yay? Ew? Both?

‘THE BABY’S GOOD’ | At 34 weeks along, Alex’s pregnant cancer patient Veronica learned from Amelia and Arizona that she only had two to three months left to live, so they wanted to deliver the baby that very day. Before the C-section, the doomed mom-to-be told her docs, “I want to sign the DNR” — without telling BFF/babydaddy Jeremy. In the OR, Veronica did just fine — at first — and got to meet her newborn. But shortly, the new mom’s condition took a turn for the worse, so she sent Jeremy to stay with their son while she elected to die quietly rather than undergo more surgery. As she drew her last breaths, she confessed to Amelia that she loved Jeremy, he was more than just her dear friend. “He’s gonna wanna keep loving me after I’m gone,” she said. “Will you tell him not to look back? He’s a dad now… He has to be fearless.” When Veronica got cold, she didn’t want a warming blanket, all she — aw, gee — wanted was Shepherd to hold her. After she passed away, Arizona and Amelia broke the news to Alex, and if I’m not mistaken, Shepherd threw a lot of especially meaningful looks at the new dad and his son. (Can you say “preggers”?) Finally, she collapsed in tears in Owen’s arms. (Can you say “preggers” louder?) 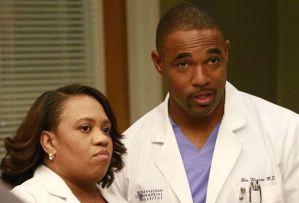 ‘I’M ON A MISSION’ | Though Ben accused Bailey of being scared of Catherine, the chief wasn’t afraid to change lanes and meddle in Richard’s marriage. “My car belongs to me,” she said. So she recruited Kepner to help with her plan. Which was? Er, she didn’t really have one. As was obvious when she tried to speak with Catherine. “Just because you feel responsible” for our problems, Dr. Avery huffed, “doesn’t mean you have to fix it.” April had marginally better luck with Richard treating Mary. He came off obstinate, but you could tell she’d gotten through to him. Sorta. As the episode neared its conclusion, Kepner suggested that Bailey and Catherine were “very” similar women, so Miranda came out swinging at Jackson’s mom. “You do not know how to be married,” Bailey said — not to her equal. And if she wanted to have old-people sex with Richard the way Bailey hoped to have old-people sex with Ben, she’d get her s— together. In the end, Catherine reached out to Richard, and it looked like they were on the road to a reunion.

So, what did you think of “Don’t Stop Me Now” and the long-awaited reveal of Mer and Nathan’s budding relationship? Was it worth the wait? Hit the comments.