As if this week hadn’t already given us a big enough reason to avoid air travel, Thursday’s Grey’s Anatomy found Meredith boarding a flight that was bound to get turbulent — and not just because Nathan also had a ticket to ride. What happened between takeoff and landing? Read on and find out. 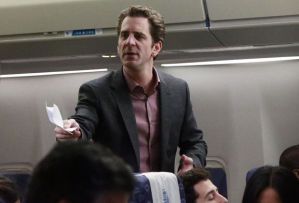 ‘ARE YOU SURE YOU’RE NOT FOLLOWING ME?’ | As the Chandra Wilson-directed episode began, we were introduced to the jerk on the flight who insisted his overhead would fit in a space in which it clearly wouldn’t, and complained about the screaming kid nearby. When Mer kindly switched seats with the youngster’s dad, she wound up sitting a passenger away from Nathan. They were both on their way to the same conference, it turned out. Which sounded fun to him. Only “I told you, we’re done,” she reminded him. No messing around. “Not even a little messing?” he asked. Er, no. When Meredith got up to use the restroom, Nathan, thinking she’d made “Follow me” eyes, did as he believed he’d been instructed to, and squeezed into the tiny space with her. Though he was quickly set straight that her eyes had said nothing, much less “Follow me,” he still wanted to talk — and not in the way that they had been, with her feigning sleep or using another passenger as a buffer. There was something between them, he argued. Something that they shouldn’t have to deny, especially not in the friendly skies with Maggie 30,000 feet below them. That didn’t matter, she insisted, adding that he knew why. Finally acquiescing, he would have left the restroom… only she wouldn’t get out of his way. Why? “I don’t know,” she said. Then, staring into his eyes, she blurted out, “Whatever happens, this never happened… got it?” and the two of them joined the mile-high club. 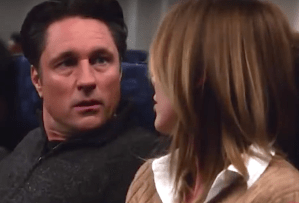 ‘QUICK AND DIRTY… I CAN HANDLE THAT’ | When the flight began to get bumpy, the duo admitted in unison that they’d both been in plane crashes. Was hers bad? “People died,” she replied. “It wasn’t great.” What about his? “Did anyone die or lose a limb?” Having heard about Mer’s experience, Nathan insisted, “I’m definitely not telling you about mine now — it can’t compare.” When he of course relented and told his tale, it turned out that as an idiot teenager he and a mate had taken the friend’s dad’s crop-duster for a joyride that had lasted all of four minutes before they crashed into a shed. Just as they agreed that hers had been worse, way worse, the plane hit such bad turbulence that not only did the oxygen masks drop, but passengers were thrown out of their seats up against the ceiling, and Mer had flashbacks to her nightmarish crash. Unable to get up due to the threat of injury, Mer and Nathan at first had to give instructions on patient care from their seats, starting with Jay, who checked fiancé Max for a pulse. When they could get up, Mer tended to Max, while Nathan treated flight attendant Candice’s hurt wrist. A pediatric dentist also pitched in as best he could. Mer couldn’t tell if Max had a brain bleed, and argued with Candice that the pilot had to reverse her decision not to land the plane in these dangerous conditions. Max’s life could depend on it. The pilot, unmoved, wouldn’t even speak to Mer.

‘LOOK AT THIS BOO-BOO’ | As other call buttons went off, Mer left Jay in charge of keeping an eye on Max; Nathan flirted with Candice (didn’t he?); the pediatric dentist tried to flirt with Mer; and Ingrid, the woman formerly in between Grey and Riggs, complained that he’d said he’d come back and hadn’t. Speaking of complaining, the resident jerk did some of his own — even ordering an apple juice, no ice, from Mer. (The gall!) Nathan then teased Mer about her pediatric dentist; she, in turn, teased him about his stewardess. During a quiet moment, she discussed with him “the Seattle Grace Five” and admitted that her sister had died in the crash. She’d lost so many people that “sometimes I just feel like I’m waiting for my turn” to die, she added. Suddenly, he understood why she was so protective of Maggie — having lost Lexie, she didn’t want to lose another sister. But, at some point, he suggested, she had to start doing things that would make her happy. No, she said. “I am married.” (Cue the shooting pain to the heart.) Just then, they were interrupted by Ingrid. Max was throwing up and having a seizure — yeah, definitely a brain bleed.

‘ISN’T THAT BAD TO STICK A NEEDLE IN THE BRAIN?’ | At last, the pilot emerged from the cockpit to tell Mer that she wouldn’t endanger 200 passengers’ lives to save one by trying to land in unsafe conditions. Off that setback, Mer became inspired by Nathan’s talk of what they’d do in the field and decided to operate then and there. The trick for her? Evacuating a bleed with just a syringe, without ever hitting brain matter… in a moving plane… during turbulence. (Even if you had a miraculously stress-free day, watching her start the procedure had to make parts of you clench that you didn’t even know could clench.) After round five, Mer decided to remove to syringe so as to stop inserting the needle over and over. (Jeez, and I thought it was tense before!) At that moment, someone began yelling for help from the other end of the plane — it was an elderly woman near the jerk with pulmonary hypertension. Nathan ordered the flight attendant to ask for erectile dysfunction drugs — and the elderly woman actually had some. While a shaky Ingrid nervously replaced Riggs helping Grey, Nathan had to defib the jerk, who, even with the drugs, passed out. Just as the pilot announced that she’d found a safe place to land, the plane was knocked for another jolt — with the needle sticking out of Max’s head!

‘NICE FLYING WITH YOU’ | Miraculously, when the plane settled, the needle hadn’t moved. “Nathan, I could use your help,” Mer yelled. But he wouldn’t give up on the jerk. With the pediatric dentist’s help, Grey pulled some MacGyver s— to get the blood out of Max’s head faster. Nathan’s patient survived, too. As the pulse-pounding hour drew to a close, Riggs turned down Candice’s offer to call him for a follow-up and suggested to Mer, since they’d wound up in Sioux Falls, there was probably a nice hotel nearby. Not for them to sleep in together, she said. When he accused her of being scared, she insisted, “I’m not scared I’m making a choice. I’m prioritizing my family, my sister.” At that, Nathan called her on being afraid of letting Derek go. She didn’t want to talk about it, but neither did he — he wanted to live his life. He had one, and so did she. In the end, after careening through memories, Mer chose to live. “It better be a nice hotel,” she said.

So, what did you think of “In the Air Tonight”? Have we decided officially if we are pro-Mer/Nathan or anti-Mer/Nathan? Hit the comments.