Need to catch up? Check out the previous Girls recap here.

Our little Girls are growing up. Finally.

In the series’ penultimate episode, a major job offer causes Hannah to seriously consider leaving New York City and raising her baby elsewhere. The possibility pushes the mom-to-be to seek out the opinions of those who’ve shared her sphere (and at least a couple who’ve shared her apartment) over the past six seasons.

It doesn’t go well — mainly because Hannah, Marnie, Shosh and Jessa finally have realized what we’ve known all along: They’re not really friends. And because of that, Hannah’s decision becomes an easy one.

Read on for the highlights of “Goodbye Tour.”

A NEW HOPE | Hannah happily tours a small liberal arts college, then has an amazing meeting with the department head who all but hires her on the spot. (Side note: Ann Dowd!) The woman’s admiration for Hannah seems to stem from the fact that she writes for online publications. “Can you show these students the real guts and meats of the Internet, what it’s really for?” she asks. When Hannah replies in the affirmative, it’s basically a done deal: She gets a professorship offer via phone call on the train back to the city.

ROLL CALL! | After asking for the weekend to consider it, Hannah consults the people in her life. A brief summation of their opinions follow:

* Elijah: Nay. He reminds her that they made a promise to live together in misery in the big, bad city. We also learn that he proposed to her in St. Mark’s Place way back. (!) He also sings her Demi Lovato’s “Cool for the Summer” through their bedroom walls as they’re both falling asleep. (Aww.)
* Hannah’s dad: Yay. He and his boyfriend think her leaving New York City is a great idea.
* Marnie: MIA, though Hannah leaves several voicemails.
* Shoshanna: Also MIA, and her phone number has been changed.
* Caroline (aka Adam’s sister/Sample’s mom): A huge yay, so much so that when she cries “I release you like a biiiiird,” it freaks Hannah out and sends her to Shosh’s in person to figure out what’s going on. 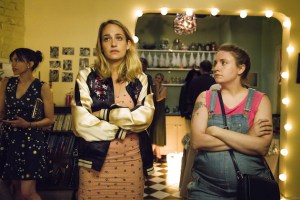 CONGRATS, SHOSH! | And that’s where she finds out that Shoshanna is having a party to which she invited everyone but Hannah — even Elijah is there — and that Shosh is going to marry a guy named Byron. In fact, the bash is their engagement party. Marnie and Jessa are there, too, and when drama starts to break out, Marn calls an emergency meeting in the bathroom.

“We’re gonna be the adult women I know we can be,” Marnie announces, and that happens, but probably not in the way she expects. Shoshanna — who has always, always been my favorite — correctly points out that they can’t do something for one of them without another making it all about her. “I think we should all just agree to call it,” she pronounces, bailing on the meeting first.

Then Hannah announces that she’s taking the job upstate, because she’s fed up with New York, aka “a city where people take s–ts on the street.” (Side note: Just in case you’re not from New York and think this line may be exaggerated for comedic effect, let me assure you: It is not.) Just then, Elijah busts in: After four callbacks, he got the part in the White Men Can’t Jump musical. Yay!

MOVIN’ ON | Any sane person with the option would leave a party at which he or she just broke up with his or her former besties. But all of the ladies remain, which gives Jessa an opportunity to give Hannah a dress for the baby — which we learn is a boy — and to apologize “for everything.” They’re both crying as Hannah quickly reassures her that they’ve both done stuff that wasn’t great. “We were all just doin’ our best,” she adds. “The worst best,” but still.

So the last we see of the four of them together, they’re dancing at the party just like back in Season 1. And in flashes of the future, we see Hannah moving upstate and looking really happy in her new home.