For a moment there in this week’s Girls, it’s easy to think we’re in another one of those “Hannah’s ideal day” episodes. And that thought chills me so deeply, given what’s happening on screen, I have a fleeting desire to snatch Laird’s knit cap from his misguided head and plop it on my own.

Because when Adam breaks up with Jessa in the episode’s first moments, then hightails it to Hannah to announce that he wants to raise the baby with her, it’s the answer to all of Ms. Horvath’s current problems rolled into one emotionally erratic (albeit impressively chiseled) package.

It’s also an astoundingly horrible idea. Read on as we revisit how it plays out in “What Will We Do This Time About Adam?”

‘I’M TOO PRETTY TO GO TO A COOLING CENTER’ | We open on Adam giving Jessa the news that he’s going to tell Hannah he wants to co-parent the mini surf instructor growing in her uterus. “You gotta do what you gotta do,” she says, not giving him the giant reaction he expected (and, I’d bet, kinda wants).

Meanwhile, upstairs, Hannah and Elijah are both wearing only underwear and sweating profusely because their air conditioner is on the fritz. When she complains that she doesn’t feel well, he replies, “Well, honey, of course you don’t feel good. It’s 127 degrees in here and we are poor, you have a parasite growing inside you, and we’re both going to die of heatstroke at any minute.” (Heh.) “I’m starting to feel like I was a little naïve [thinking] that all of this was going to be so simple,” she laments.

WELL, AS LONG AS YOU’RE TAKING IT SLOW… | The heat drives Hannah to stock up on frozen novelties at her local bodega, which is where Adam finds her. She’s not happy to see him and doesn’t want to go back to her place with him, so he makes his pitch right there: “I want to raise your child with you. I miss you. And I miss being with you. And I thought I could move on, but hearing about the baby made me realize we don’t have anymore time to waste.”

She’s understandably confused, so they go back to her apartment to process, weigh their options and have an adult conversation about… JK JK JK they have sex.

JILTED JESSA | Despite her cool façade earlier, Jessa is not really OK with the idea that her man just decided to leave her. She tries to order premium cable (“elite channels,” she calls them while she’s talking to the cable operator) but has to pause during the call to vomit. (Side note: Because I watch far too much television, I automatically think she is pregnant, herself. We get no indication of that elsewhere in the episode, so perhaps she is just very upset. But I can’t have been the only person to read that into her puking, right?)

Jessa also swings by Laird’s, her downward spiral doing the double duty of neatly informing him about the breakup and Hannah’s impending motherhood. So while Adam is talking to Hannah’s belly (which would be cute if it were not an abomination), the downstairs neighbor pays them a call and volunteers to raise the baby, saying doing so is his purpose. Oy. Also? Still a better choice than Adam. 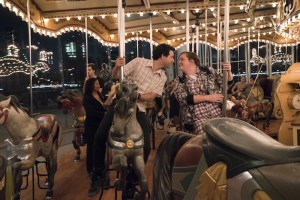 A NEW DAY FOR RAY | Let’s take a break from this insanity to check in with Shoshanna and Ray, who’ve just run into her old boss, Abigail, on the street in Brooklyn. “She’s a lot,” Shosh warns him — which is amazing, because Shosh — but crotchety old Ray and Claire’s Accessories personified Abigail hit it off really well. (Zosia Mamet wins this week’s episode with the scene where she just watches them with growing levels of incredulity at brunch.)

At some point, the pair drop Shosh. And after a day of walking around Brooklyn and interviewing people for Ray’s continuation of Hermie’s project, they kiss on the carousel at the waterfront. Um, sure?

IN WHICH SENSE (FINALLY) REIGNS | While Jessa continues to unravel, Adam and Hannah continue to talk as though they are a long-established pair happily awaiting their kid’s birth. But there are signs — like Hannah’s zoning out while they’re buying some baby stuff — that she’s having THOUGHTS. So by the time that they’re sitting at a diner and he casually mentions how they should get married in order to get artists’ housing, she can’t stop herself from crying. (Kudos to Lena Dunham and Adam Driver for this scene, in which her big NO to the whole venture and his reception of it is communicated without a single word.) Also, THANK GOD.

So they part ways, and Adam goes back home to Jessa, who greets him with a knowing smile.