The Farm team is down another agent.

Quantico showrunner Joshua Safran confirms to TVLine that this week’s episode-ending phone call — in which Harry contacts Alex, ostensibly to announce that he’s leaving the CIA-FBI task force but really because Sebastian is holding a gun on him — is leading into Russell Tovey’s departure from the show.

“It is definitely sad to lose Russell, momentarily at least,” the executive producer says. “Or maybe forever in the Quantico universe. But yes, this is an exit.”

To find out why Tovey’s time on the ABC drama has come to an end — as well as what’s going on in Raina’s apartment and why low-rung reporter Sasha has her own office (admittedly, I may be the only person who cares about that) — read on.

TVLINE | Before we get into this week’s episode, a little housekeeping from last week’s: León had such a sad, anonymous exit.
He is dead… but at the same time, we didn’t see him die. There’s always like, you know, a change he’ll pop back up, maybe. But I think in my mind, he’s actually dead. The reason that it was anonymous was because I definitely wanted to keep it in the point of view of these mysterious people and not really show the gratuitous body. It’s a TV show on network television and things happen to people… [Laughs] He’s the one who came in with some darkness in his past, and he actually stayed the most untouched out of anybody. He did not become an operative, he did not become an evildoer, he really did try to keep his head around him. So even when he got a little paranoid, he was actually correct.

TVLINE | So Raina comes into her apartment and she starts fighting off these people who seem to be staging stuff in there, yes?
Yes, you are correct.

TVLINE | They seemed to be trained by the same people who trained Alex and company. Is that a possibility?
We don’t ever say that explicitly, but we talk about them coming from similar backgrounds. 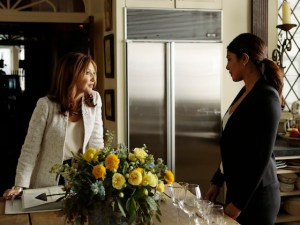 TVLINE | I have in my notes [Broadway and film star] “DONNA MURPHY!”
I love Donna.

TVLINE | I loved seeing her. And you kill her in the middle of Central Park, with Bethesda Fountain and everything.
She threw herself down on the ground every time she got shot. That’s probably one of things I love most about shooting in New York is working with theater actors who are used to doing their own makeup, who are used to travelling uncomfortably, who are used to waiting to sit around until their scene, sometimes until the end of an act. Not that television actors are much different. There’s just like an all-hands on deck mentality with a lot of theater actors that is fantastic, and you really get a lot of that in New York. So you have Donna being like, “I don’t need a stunt double, I will throw myself down on this ground, I’ve thrown myself on the ground before,” you know?

TVLINE | Harry leaves the shootout to follow someone, and that someone turns out to be Sebastian. At the end of the episode, he’s being held by Sebastian. What can you tease about what might have happened to Sebastian since the last time we saw him?
I’ll give you a tidbit I shouldn’t be giving, but I think it’s important: This very well may be the last time you see Harry on the show — for this season, I will say, at the very least. What happens after that phone call, you’ll find out. What happens during that phone call, you’ll find out. Russell was committed to doing [the United Kingdom’s National Theatre production of] Angels in America when we hired him. We knew that, and we had a very hard out with him. He actually ended up staying longer than he was even initially planning because he loved the show so much and we love him so much. That isn’t to say he won’t be back — although maybe he’s dead. Keep watching, you’ll find out very soon if that happened. But it is definitely sad to lose Russell momentarily at least, or maybe forever in the Quantico universe. But yes, this is kind of an exit.

TVLINE | Sexuality and attraction being fluid and all, is it completely off the mark that I felt like Harry and Alex were dancing around flirting in the last few episodes?
When I first reached out to Russell for this role, which, as you know, was created for him, I told him that Harry would be bisexual because in my mind, Harry would just use anybody to get whatever he wants, right? We need a pleasure-seeker and he doesn’t stick around for the real part anyway, he’s always off doing something else. As we went into it, I was like, “I think Harry can still do that and identify as gay. He did not need to identify as bisexual. He was a gay man who could do whatever he wanted in the moment, and that doesn’t change your identity as a gay man.”

…Harry’s a gay man who might sleep with a woman if he needs to. Our nod to that was him making out with Alex. and of course all season, Russell kept saying to me, “When am I going to hook up with Alex?” [Laughs]

TVLINE | One last thing: Sasha is an arts and culture reporter who wants to break into political investigative stuff… and she has her own office with a door?! I don’t have my own office with a door!
Well, her office with a door is very tiny. [Laughs] You can get two people and the cameraman in there. The lenses that we use make it look much bigger. Also, as much as I would love to say that we could’ve built an entire set with cubicles for her, we can’t. The stage space we had meant if we did a cubicle, we would’ve had to stay down on the ground so you could never see the edge of the cubicle [because there’d be nothing beyond it]. [Laughs] I can’t believe you work in a cubicle, Kim. In my mind, you have a corner office with a view of Times Square!