Welcome back, my fellow Riverdale-rs! After a three-week (spring) break, Archie and the gang are back… and yeah, things are still weird.

Betty’s pregnant sister Polly is hiding out at Veronica’s, and spills her guts to Sheriff Keller about her romance with Jason. She defends his drug-dealing as just a “one-time delivery”: He agreed to drive some drugs upstate for the Southside Serpents in exchange for some getaway cash. (Those were the drugs Betty and Jughead found in the trunk of that stashed car.) And now Polly and her baby are being yanked back and forth between two eternally warring families: the Coopers and the Blossoms.

To defuse this mess, Veronica volunteers to throw Polly a baby shower. And even though Betty’s mom Alice is still pissed about… well, everything, she decides to play nice and come along. She and Polly even have a sweet moment there together, before the Blossoms barge in with a too-expensive stroller and their kooky Aunt Rose, who uses a dangling crystal to predict: Polly’s having twins! (Who needs a sonogram, right?) 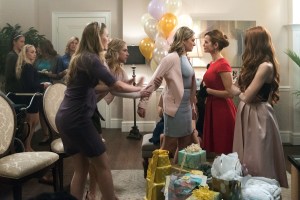 But things only stay civil for so long. Alice and Cheryl’s mom Penelope nearly come to blows over Polly’s living situation and Polly yells at them to stop. She even blames Alice for Jason’s death; if she wouldn’t have been hospitalized, Jason would still be alive. Alice wants Polly to come home, but Polly doesn’t want to live with her dad Hal — especially after he strongly suggested she make “an appointment with a doctor” to get rid of the baby. Wow… from the look on Alice’s face, she didn’t know about that particular plot twist.

She confronts Hal about it, and he admits it; he refuses to raise a child that “has Blossom blood.” So Alice kicks him out of the house, and threatens him, too: “I think by now, you know what I’m capable of.” But even though Hal’s gone, Polly opts to move in with… the Blossoms! Oh, I’m sure that creaky old mansion of theirs is totally baby-proofed, you guys.

Let’s see what else went down in “The Outsiders”: 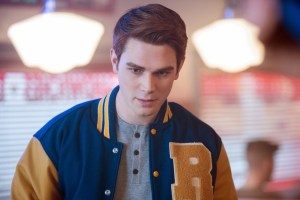 MEN AT WORK | Fred’s big construction project at the old drive-in gets sabotaged when his workers pull out at the last second. (They got a better offer from Cliff Blossom, who’s still angling to grab back that land for himself.) Fred confesses to Archie that his business is drowning in past-due bills, and he can’t afford to wait around. So Archie gathers up his pals and offers to haul rocks for his dad until this labor dispute is settled. Have these kids been cleared by the local union?

That night, two thugs sneak onto the job site and smash up Fred’s equipment. Archie suspects it’s the work of the Serpents, and wants to get revenge. Jughead hesitates, though — since that’s his dad F.P.’s gang — so Archie goes off without him and (stupidly) picks a fight at a Serpent bar. He almost gets throttled before F.P. steps in to save him. Now Archie knows Jughead’s dad is a Serpent, and he confronts him about it at the baby shower… so now Betty knows, too.

Betty assures Jughead she doesn’t think any less of him, but she does want to go question F.P. about Jason. F.P. admits to setting up the drug-mule thing for Jason, but he swears he had nothing to do with his death: “I’m not the perfect father… but I’m no killer.” And F.P. does step up to help Fred, bringing in his Serpents to work on the drive-in site. But he also stuffs Jason Blossom’s letterman jacket into a bag, calling it “our insurance,” and hands it off to… Kevin’s Serpent boyfriend Joaquin! So Joaquin is just pretending to like Kevin? Do not mess with Kevin’s heart, Riverdale!

* F.P. told Hermione the thugs that busted up Fred’s job site weren’t locals. They were from Montreal, which connects them to… Hermione’s estranged husband Hiram! Could he have caught wind of Hermione’s affair from behind bars?

* Alice yelled at Hal during their fight, “You did to Polly exactly what you did to me!” Wait, what? Alice had an abortion, too? Oh, we’re gonna need to hear more about this.

* When Polly asked Betty to be her baby’s godmother, didn’t it sound ominous when she said “if anything were ever to happen to me”? Is that a hint that Polly could be joining Jason in milkshake heaven soon?

* Um, I’m sure y’all noticed in that construction scene: Jughead is jacked! He’s definitely not the nerdy beanpole Jughead we know from the classic comics. But this is The CW, after all — where even background extras have perfect cheekbones and six-pack abs.

* Did Veronica say she was once invited to a “Vanity Flair” party? Why couldn’t she just say Vanity Fair? Very weird bit of anti-product placement there.

* Six episodes left this season. Will we find out who killed Jason by season’s end? Or will they leave us hanging, Twin Peaks-style? (Note to the producers: Please don’t leave us hanging. You don’t want to follow in the footsteps of Twin Peaks Season 2, do you?)