On tonight’s Riverdale (The CW, 9/8c), Betty and Veronica throw Polly a baby shower so full of family drama that it wouldn’t surprise us if the expectant mom goes into early labor.

For starters, Polly’s mother Alice Cooper “likes to be in control… so she’s not very happy that other people are taking the reins on her daughter’s affairs,” Mädchen Amick tells TVLine. 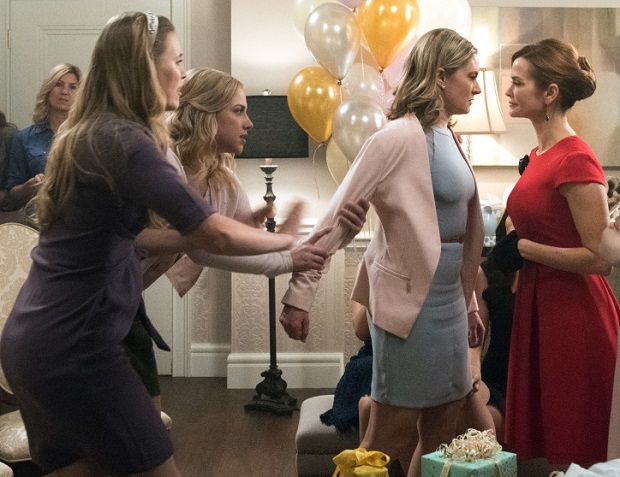 Then the bad blood between the baby’s soon-to-be grandmas leads to a nasty blow-up. “Alice Cooper gets in Penelope Blossom’s face and lets her know how she’s feeling about her,” Amick previews with a laugh.

Below, the actress teases the reveal of “a very big secret” during the hour and weighs in on whether Alice could be a killer. Amick also hints at a surprising arc for her Twin Peaks alter-ego Shelly in Showtime’s upcoming revival.

TVLINE | How does Alice feel about Polly living with Hermione and the Lodges?
She is not happy about that at all. Hermione sits Alice down in the diner and has a bit of a heart-to-heart with her. Alice has to decide whether to take Hermione’s advice, whether she can trust it. It’s an interesting situation that the families are in. There’s a lot going on between those three families. A lot of bad water under the bridge.

TVLINE | We’ve seen that Betty has pent-up anger issues and is on edge a little, like her mom. Does Alice have a softer side like Betty?
Yeah, we get to see Alice Cooper’s very, very, very thick layers of protection crumble. It starts in [tonight’s] episode. A very big secret is revealed that will really give you some insight into why Alice acts the way she does and why she’s overbearing and too controlling. We’ll get to see some of the history of what Alice has gone through and some of the hurt that’s behind all of that fury that she can’t help but throw at everyone around her. [Laughs] 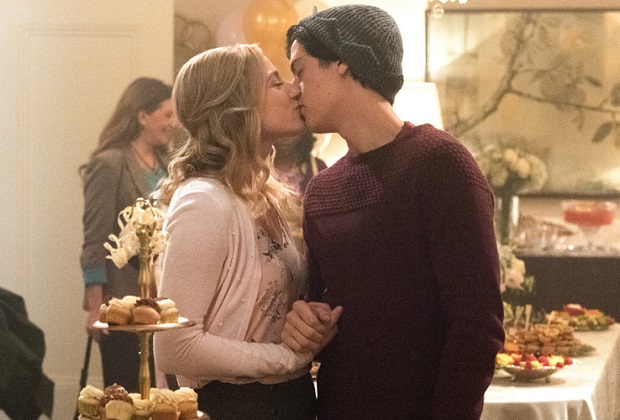 TVLINE | Alice has made her feelings very clear about Archie and Betty’s relationship. Does she approve of Betty dating Jughead?
You know what? Jughead has found his way into Alice Cooper’s heart. She actually likes him and approves of him. I think that she appreciates that he’s a little quirky. She sees in Jughead a very honest effort to just be a very supportive, nice boyfriend for Betty. So shockingly, Alice approves of Jughead!

TVLINE | Alice has done some terrible things, but does she have it in her to murder Jason Blossom?
I think she does. We do find out who the murderer is [this season]. There’s a lot of suspects in town. I definitely wouldn’t cross Alice off your suspects list. She’s got a lot of skeletons in her closet. 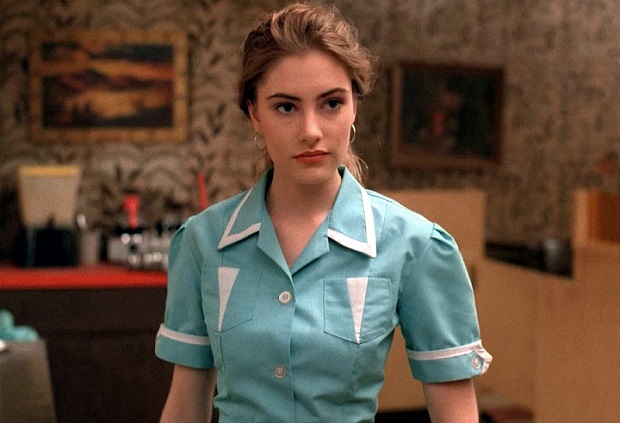 TVLINE | This isn’t the first show you’ve been involved in with a small-town murder and a diner. Did you offer Marisol Nichols any “waitressing” tips for her job at Pop’s?
[Laughs] No, she had it handled very, very well. Her storyline [is] a little bit more like [the movie] Frankie & Johnny. I really felt like it was sort of like that girl that had to be humbled and had to step into a blue-collar situation, and she wasn’t comfortable with it. It would have been fun to have seen Alice come in and just really give her a working-over that she was working there. [Laughs] But it never came up in the storyline.

TVLINE | How did you react when you found Shelly was still a waitress in the Twin Peaks revival?
Well, I can’t completely confirm that that’s the case, but I know that you’ve seen the pictures of Shelly and Norma behind the counter at the diner. I was very pleasantly surprised by what [creators] David Lynch and Mark Frost wrote for Shelly and to see the journey that she had gone through over the 25 years since we saw her last. It was emotional for me to put the waitress uniform back on, especially when I looked down and saw my initials still [on] the exact same uniform. It was really touching and nostalgic. It was a very magical experience to be able to go back to that world.

TVLINE | I think some fans were expecting her to have moved on or moved up in her professional career.
Well, you know, sometimes those small towns, you get into a comfortable loop, and you can’t break free of it. But there’s a lot of new and very interesting stuff for Shelly beyond working at the diner that the fans will be really surprised by and very happy with.