After a few weeks of distractions, Riverdale plunged right back into the Jason Blossom murder case this week — and gave us a brand-new suspect to consider.

Since the drive-in closed, Jughead’s been sleeping in a storage closet at school. He tells Archie things aren’t great at home: His dad F.P. is a drunk, so his mom left, taking his sister Jellybean with her. Archie says he could ask his dad to offer F.P. his job back. F.P. is still holding a grudge against Fred, but Jughead convinces him to swallow his pride and go back to work. And it goes well enough that Archie and Jughead join their dads for a father-son dinner at Pop’s.

At dinner, Fred and F.P. joke around about Fred’s terrible high-school band (the Fred Head!), but F.P. turns nasty when he insists on grabbing the check, telling Fred, “You owe me.” So why does Fred owe him? F.P. claims he and Fred co-owned the construction company, but when F.P. ended up in jail after some shady side business, Fred bailed him out — on the condition that F.P. sign the company over to him. Fred denies all that, telling Archie F.P. was just a drunk and a thief, and he had to bail him out more than once.

Back at school, Principal Weatherbee and Sheriff Keller find Jughead’s murder board in the newspaper office and haul him in for questioning. The sheriff brings up a incident where Jughead tried to burn down his elementary school as a kid, and notes he’s been bullied by guys like Jason: “Who wouldn’t want to lash out at that?” Jughead, sensing where this is going, wisely asks for an attorney.

F.P. is nowhere to be found, so Archie and Fred have to pick up Jughead, with Fred covering for Jughead by telling the sheriff he was busy ripping out drywall when Jason was killed. (Fred later fakes some work orders to back up the alibi.) F.P. eventually stumbles in late, threatening to confront the cops for railroading his boy. But Jughead talks him down, and even offers to come home. F.P. says he needs some time to get his life in order, though, so Jughead ends up crashing on an inflatable bed on Archie’s floor.

But is F.P. hiding a big secret? Because when we see him back at his trailer, swigging a beer, we catch a glimpse inside his closet — and see Jason’s letterman jacket hanging in it. Once a Serpent, always a Serpent, huh? So F.P. torched the car? (Why wouldn’t he torch the jacket, too?) Was he just stealing the drugs inside? Or does this mean he had something to do with Jason’s death? Better get some more of that bail money ready, Fred.

Let’s take a quick look at what else went down in “In a Lonely Place”: 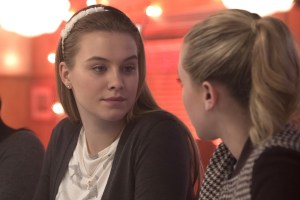 POLLY, CAN YOU HEAR ME? | Cheryl finds out about Polly’s escape from that nun-run loony bin — and assumes that means she’s the killer. In fact, Cheryl even tweets that out: “Polly Cooper killed my brother.” (Along with some hashtags, obvi.) This leads to yet another icy standoff between the Coopers and the Blossoms when the whole town gathers in the woods to search for Polly. Betty’s mom Alice is tired of all the accusations, so she holds a press conference, announcing that Polly is pregnant with Jason’s baby. That sure changes the Blossoms’ tune!

Betty finally realizes where Polly must be hiding when she remembers her sister running away at age nine: She goes up to the attic… where she finds Polly. Polly still wants to run away like she and Jason planned, because her parents want her to put her baby up for adoption. (They later confirm this to Betty, but lie that it was Polly’s idea.) But Cheryl emerges as an unlikely ally, telling Betty she still thinks Polly is nuts, but she’s carrying Jason’s baby, so the Blossoms want to help out however they can: “We’re all on the same team now.”

That leads to an awkward summit at Pop’s, where Mr. and Mrs. Blossom promise to protect Polly and her baby “ferociously.” But Cheryl eventually sees through their nice-guy act and warns Polly, “I don’t think they want to help you.” So Polly ends up seeking shelter with… Veronica and Hermione! (Hey, they have plenty of room in that luxury apartment of theirs, right?)

* Veronica’s storyline this week — she ran off to go clubbing to punish her mom for forging her signature, before negotiating a truce — barely justifies a bullet point. But I did like seeing more of Reggie… except he barely got any lines! He’s a major character in the comics, people! #FreeReggie

* Bughead Update: Betty and Jughead are official! Archie noticed Jughead putting his arm around Betty at school, and both he and Veronica gave the new pairing their blessing. Plus, when Betty remembered where Polly might be, she planted a big ol’ kiss on Jughead! Let’s just hope he stays out of jail long enough to let this relationship develop.

* Bravo to that fantastic opening scene: Jughead’s dream of a squeaky-clean ’50s family dinner, with everyone in classic Archie garb. Jughead wore his spiky crown hat, Betty was dolled up like Betty Draper (Season 1, of course), and Archie proudly wore a dorky letterman sweater and a bow tie.

What year is it? #Riverdale pic.twitter.com/EKkH7Ze77k

* Wouldn’t the Sisters of Quiet Mercy be able to verify Polly was with them when Jason was killed, and eliminate her as a suspect?

* There was very little Archie in this episode — and I didn’t really miss him, did you?

* Line of the week, when Veronica heard about Betty and Jughead’s torched-car adventure and the fact that the killer might still be following them: “Honestly, guys, we should just move.”