Warning: The following is virtually wall-to-wall spoilers for Thursday’s Grey’s Anatomy. If you’ve yet to watch, you might want to put off reading.

Well, we knew it didn’t look good for Diane when ABC’s Grey’s Anatomy promos called Ellen Pompeo’s directorial debut “the most emotional episode this season.” So it probably wasn’t a total shock that, after Maggie learned her adoptive mother’s cancer had spread, ignored Meredith’s advice and pushed the patient into a painful clinical trial, she still lost her. Here, Kelly McCreary, who gave a crushing performance as Dr. Pierce, takes TVLine through the heartbreaking hour, which concluded with Richard flying in Maggie’s adoptive father and forgiving Bailey for her betrayal, and Mer warning Nathan that her half sister would need her for a while (meaning their date would have to wait). 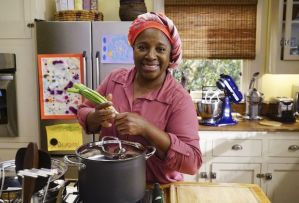 TVLINE | Were you relieved that Maggie got to make peace with her mother well before, you know, the end?
Yeah, that was a huge source of relief. She got to be totally on Diane’s team for the whole journey. But what’ll be interesting to see is what else was unresolved when Maggie comes to certain points in her life in the future — like when she walks down the aisle and her mom won’t be there.

TVLINE | As much as Maggie lashes out at Meredith in this episode, it seems like this shared experience ultimately can only bring them closer.
The loneliness of losing a parent is isolating, I think, so Maggie spends a lot of time pushing people away in this episode. But, in the end, her sisters [not only Mer but in-law Amelia] keep showing up no matter how much Maggie pushes them away, and that’s the last image that we’re left with — that they’re going to be there for her no matter what. And eventually, once she’s able to sort of let them in again, they’ll be there.

TVLINE | Which sets it up for it to hurt even worse when Maggie finally finds out about Mer and Nathan.
Absolutely. But [on the other hand, Meredith and Maggie have] gone through something so extreme together, and I think the whole Nathan question has been completely irrelevant this whole time. So when it comes up again, I think it becomes about weighing, “Oh, there’s this guy that I liked” against this life-and-death experience that they’ve shared.

TVLINE | In Part 1 of our interview, you mentioned that Maggie’s an optimist. Does losing her mom change that going forward?
No. That’s who Maggie is at her core. I don’t think that this is going to change that. But I do think she’s going to take to heart all of that lovely advice that her mom gave her in her final moments, when she told Maggie to just live life more fully and give herself permission to be a little messy.

TVLINE | Maybe even romantically messy?
Well, since all the single-ish guys [at Grey Sloan] are in these sort of ambiguous relationships right now, getting involved with any of them might give Maggie something to be messy about. I’d be game if it gives Maggie a chance to be a little less reined in!

What did you think of “Be Still, My Soul”? First-time director Pompeo? With whom would you like to see Maggie paired? Hit the comments.