Nothing would please Kelly McCreary more than if we didn’t need a tissue watching Thursday’s Grey’s Anatomy, we needed the whole box. “I hope you’ll be really wrecked,” admits the actress, who plays Maggie, the Grey Sloan doctor struggling with her adoptive mother’s dire prognosis. “No matter what a person’s relationship is like with their parents, I hope that people will feel Maggie’s journey deeply and empathize.”

After learning just how serious Diane’s condition is in “Till I Hear It From You,” Maggie goes into “Be Still, My Soul” (ABC, 8/7c) weighed down by a mess of emotions. “She’s terrified, she has a lot of regret about how she treated her mother [before she knew the truth], and there are some feelings of betrayal [since] she was left out of the loop,” says McCreary. But “at heart, Maggie is an optimist, so she believes that she and her team can make her mother well again.”

Which puts her on a collision course with half sister Meredith. “Maggie can not hear it when Meredith tells her that what she wants to work won’t work,” previews McCreary. “So she takes it out on Meredith. A part of what’s really sad to watch [in the unfolding drama] is how the reality and seriousness of this situation is apparent to everyone except Maggie. Because of the rose-colored glasses that she wears and a certain amount of denial that she’s in, she really can’t hear it.”

On screen, there for Maggie is pretty much all of Grey Sloan — including crush Nathan. However, the embrace between them that’s been teased by the network’s promos “has less to do with her affection for him,” notes McCreary, “than it has to do with him helping somebody in need.” 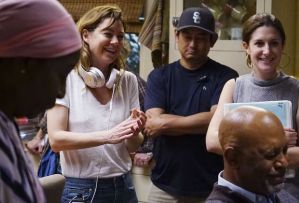 Off screen, there for McCreary and the cast was first-time director Ellen Pompeo, aka Mer. “It felt natural” having her at the helm, says McCreary, adding that “she had a way of teasing out extra layers of emotion in not just the way that she was able to communicate with us actors. She also had really great ideas visually for how to enhance the storytelling in these spaces that we’re so used to seeing already — the hospital room, the house — or to add symbolism by shooting from overhead or wanting the scenes to be lit in a certain way. She was kind of a visionary!”