At a crossroads was the place to be in Thursday’s Grey’s Anatomy. Not only were Meredith and Nathan making progress in turning their flirtation into a relationship, but Owen was bound and determined to find out from Amelia whether they were ever again going to live like a married couple, Arizona and Miranda were longing to mend fences with Richard, and Maggie was given a golden opportunity to bond anew with her estranged mother. Read on, and we’ll go over the highlights…

‘ARE THEY GONNA BE HUGE-HUGE?’ | As “Till I Hear It From You” began, Meredith — picking up Maggie’s mom at the airport with Alex — was filling in her person on how “arrogant ass” Nathan had told her to think about whether she really wanted to pursue a relationship with him, and she was wondering whether she could afford to be so picky about sex. “You should be picky about sex,” Karev replied. “You’re hot.” Meanwhile, poor, clueless Maggie still thought Diane was only back at Grey Sloan to get a boob job from Jackson. At the hospital, Richard gave both Bailey and Arizona the cold shoulder, and Amelia scrubbed in as a neuro consult for Owen on the case of a nonagenarian who fainted and fell while hiking. Mm-hmm, because that wouldn’t be awkward at all.

When Nathan had a moment with Mer, he asked if she’d thought about what he asked her to. “No, I haven’t thought about it,” she snapped. “I have three kids and a job.” OK, then. Upon learning that Diane hadn’t yet filled in Maggie about her condition, Jackson encouraged her to come clean. She would, she said — but only after she’d had her mastectomy and was cured. For her part, Maggie needled her mom mercilessly about the breast augmentation that she thought Diane was having. Informed that Eliza had assigned Jo to work with Jackson for the day, he dismissed Wilson — but not before she learned what was planned for Diane. Further complicating matters, Maggie was stunned to discover that she’d been locked out of her mom’s files. Since Jo knew the truth and could keep her lips zipped, Jackson decided to let her stay on the case. 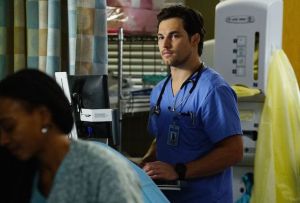 ‘YOU RAN AWAY FROM HOME!’ | Treating the elderly hiker, Stephanie and Andrew were star-struck to learn that not only was she a surgeon, but her husband was an extremely prominent doctor. Once alone with his estranged wife, Owen called Amelia out for “trying to act like nothing happened” when they both knew damn well that something had happened — she’d up and gone when the going got tough. Which, he added, was not how a marriage was supposed to work. “Are you ever coming home so we can work this out,” he asked, desperate, “or not?” In response… well, she simply didn’t respond. That’s always helpful. At least he knew what he wanted, he said. And she’d have to figure out what she wanted as well. “Pull it together,” he said in closing.

Since Diane used to tell Maggie that merely “masturbating made Jesus cry,” she wanted to know why her mom wanted “stripper boobs,” she told Mer and Amelia. “You should demand a reason,” Mer said (as much to herself regarding Nathan as to her half sis about Diane). “That is bad advice,” Amelia countered (referring to her situation with Owen as much as Maggie and Diane’s). “It’s her body, her boobs.” Elsewhere, Bailey insisted Arizona tell her why Richard was mad at her, and Robbins copped to being caught kissing Minnick (which Miranda called “way worse than what I did” since it was more than merely business). Meanwhile, the hiker-doctor’s prognosis was grim. But, since she wanted more time with her husband, even after 60 years together, Amelia would go ahead and perform the dangerous surgery that might buy her a little while. 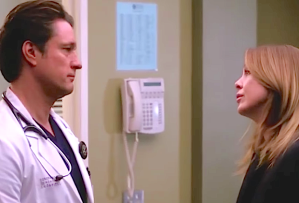 ‘IT’S UP TO YOU TO GIVE ME A REASON’ | When Nathan approached Mer to tell her he could take no for an answer and, frankly, preferred no to no answer at all, she accused him of always making a joke of everything. “This isn’t funny to me,” she said, adding that she felt like she didn’t know him, and her friends that did know him didn’t like him. So if he really wanted to pursue a relationship with her, he had to give her a reason to. Elsewhere, Jackson pushed Diane to confide in Maggie, and just as Dr. Pierce became supportive of the boob job, her mom told her the truth, leaving her daughter speechless. The next day, Maggie brought the thunder and yelled at Jackson for letting her give her mom such a hard time rather than confide in her. (Which, of course, would have been wholly unethical.)

As the hiker-doctor began to recover, Owen praised Amelia for her successful surgery, prompting her to lash out at him anew. “You are suffocating me,” she hissed. In fact, “I would love to ask Cristina how suffocated she felt by you!” (Da-amn!) Amelia felt he was chasing a dream of parenthood. But he didn’t know. “It might be wonderful,” she said, “and it might be painful, and it might be both.” In any case, if they were going to play by his definition of “normal,” they were, in her estimation, in a marriage that was destined to end. Off that heated confrontation, Amelia learned that her hiker-patient had passed away after all.

‘MY MOM IS REALLY SICK’ | As the hour drew to a close, Arizona tried to apologize to Richard. “I’ll come around,” he assured her. “But I need some damn time.” Andrew interrupted Stephanie’s grief over their lost patient by blurting out, “I think I’m in love with Jo.” (Duh.) And Nathan admitted that he didn’t have a good reason for Mer to get involved with him. That’s why he joked so much. Her reaction? “OK, so you should ask me out to dinner.” He did right then, and she accepted before being called away by Jackson to go to Maggie, who was beside herself, having realized just how bad off her mom was.

What did you think of “Till I Hear It From You”? Hit the comments.