Question: Any intel on the Grey’s Anatomy finale? I haven’t heard a peep! —Megan
Ausiello: That’s about to change in 3, 2… “It’s pretty dramatic and pretty intense,” Kevin McKidd teased to TVLine at PaleyFest over the weekend. “It’s pretty dark and very good. Debbie [Allen]’s going to direct it, and it’s going to be amazing.” Owen’s portayer adds that unlike previous closers, Season 13’s climax won’t be centered around a catastrophic event. Nonetheless, it’s “a big episode,” McKidd promises. “It’s leading toward something pretty intense.”

Question: Please tell me you have some info about Sara Ramirez coming back to Grey’s Anatomy? I miss having Callie on my TV screen. —Tanja
Ausiello: I’m just going to leave this right here and quietly walk away. 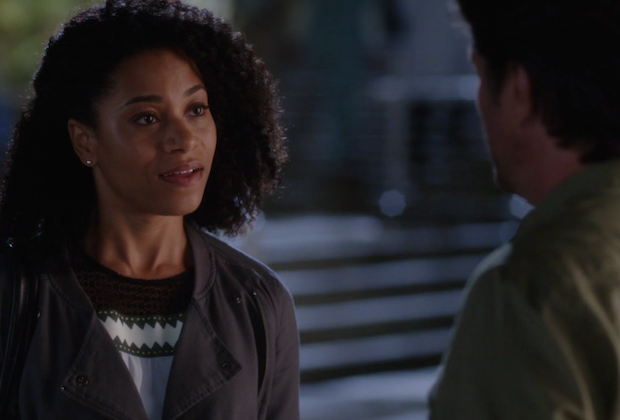 Question: Is Grey’s Anatomy‘s Maggie ever going to get a clue about Nathan and Meredith? — Leigh
Ausiello: Oh, she’s going to get more than a clue. At PaleyFest, Kelly McCreary told TVLine that “the truth will come out… before the end of the season,” adding with a laugh, “People will have to be honest, because they no longer have a choice.” But the revelation that Mer is involved with Maggie’s crush won’t, as we’ve been led to imagine, sever the half sisters’ bond. “It doesn’t hurt Maggie in the way that the audience will expect it to,” McCreary said. “In a relationship that you’re committed to because you love each other unconditionally, the way that family does, challenges can sometimes make you stronger.”

Question: Have any scoop on Arrow‘s Olicity to tease? It will be greatly appreciated. Thank you! —Stephanie
Ausiello: Though Oliver has bigger fish to fry for the foreseeable future, Stephen Amell had this to say about Oliver’s take on Felicity’s recent secret-keeping: “Look, he does trust her, but that doesn’t mean he has to agree with her.” That distinction will be put to the test in Episode 19, which is officially titled “Dangerous Liaisons” but “you could almost call it ‘Team Arrow vs. Team Felicity,'” Amell shared. Felicity and her Helix hackers and Oliver’s associates “are both after the same objective, but after it in different ways. And that pushes us into a real exploration of why Oliver and Felicity have been behaving the way that they’ve been behaving this year.”

Question: Is there anything being organized to celebrate the end of Bones? Like a big fan giveaway? Viewing parties? Something? Isn’t that done anymore? —Frieda
Ausiello: I can’t speak for anyone else, but next Tuesday at 9/8c I’m planning to tear into a fresh bag of quinoa chips, crack open an ice-cold diet Half and Half Snapple and then live-tweet the crap out of the series finale. That’s something, right? In related news, I’ve actually already laid eyes on the show’s swan song and I can tell you that longtime fans will be hard-pressed to find fault with the moving, funny, bittersweet, satisfying hour.

Question: Can you confirm that we will get a resolution to Bones‘ 447 mystery in next week’s finale? —Janet
Ausiello: I’m not sure if resolution is the right word. But the numerical humdinger absolutely figures into an extremely key moment.

Question: Is the only story for Supergirl‘s James this year the Guardian one? Is there a chance he gets a new love interest? —Daschell
Ausiello: Though he was guarded with details, showrunner Andrew Kreisberg told us at PaleyFest, “There’s a big James episode coming up that we’re starting to shoot this week. It’s, like, the biggest James story we’ve ever done. We’re excited, Mehcad [Brooks] is excited…. It’s going to be great.” 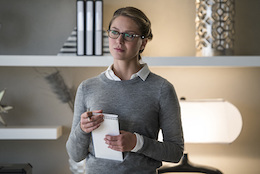 Question: Now that Supergirl‘s Kara has been fired, is there a chance we will get to see her doing freelance journalism? —Natasha
Ausiello: The human job sitch “is a struggle, for sure,” Melissa Benoist acknowledges, “but that’s her calling. So it would not be her story without more journalism.That’s what she wants to do the most with her life, so you’ll see more of that, for sure.” As EP Kreisberg shares, “Kara might not be out of a job as long as people think. You can’t keep a good writer down.”

Question: Do you have any scoop on Grimm‘s final episodes? —Jen
Ausiello: Remember when the magic stick did weirder-than-usual things at the start of this season? Yeah, so does David Giuntoli, and he hints that the mystical piece of wood isn’t done yet. “The stick does, in the beginning, seem to be some kind of heroin stick,” he says, laughing. “And if you pay attention in the last episode, I think we’ll see that perhaps the stick is, and has been, rightfully seen as a problem.”

Question: Can you confirm if that is Danny Strong’s voice in the background in The Marvelous Mrs. Maisel, when Midge returns to the club to get her Pyrex dish? —Gemini
Ausiello: I believe you are correct, but I’m awaiting official confirmation. [UPDATE: Confirmed!] BTW, if you haven’t seen the pilot for AS-P’s sublime period comedy you need to remedy that ASAP. Watch it, rave about it and help get this thing a series order.

Question: Loved Thomas Lennon as Leo Getz on Lethal Weapon. Do you know if this will be a recurring role? Also, does this mean the unfortunate end of The Odd Couple? —Brandi
Ausiello: How about the bad news first, Brandi? When we spoke to Lennon, he said he’d be “a little bit surprised” if his CBS comedy were to get renewed for a fourth season — but he also mentioned that he’d heard nothing official from the network.  Now for the good news: Lethal Weapon EP Matt Miller told us he’d “love” to have Lennon back as the talkative sidekick, and that he’d spoken to him about that possibility. “He’s definitely open to it, and creatively, I definitely want him to come back,” Miller said. “I need to figure out how all that is going to work, exactly, but yes: The plan certainly is to bring him back.”

Question: Got any Walking Dead scooplets? — Greg
Ausiello: You know it. Season 7’s penultimate episode (airing Sunday at 9/8c) finds not one but two of our regulars with guns pointed at their heads, and features a reunion that probably won’t go down in TWD history as being as touching as, say, Daryl and Carol’s. 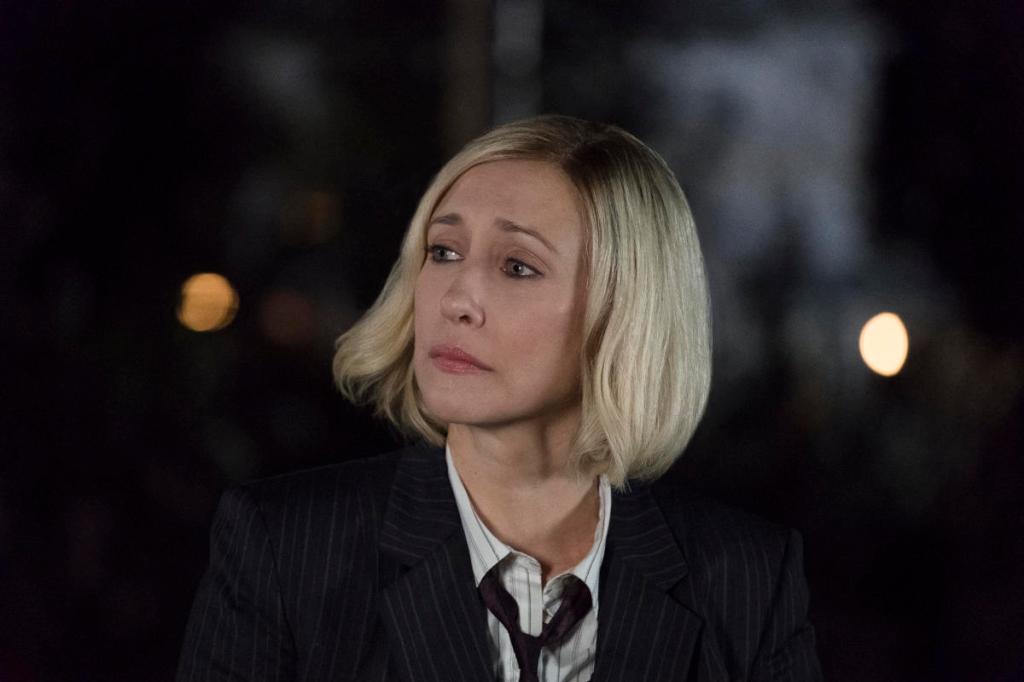 Question: Where was Vera Farmiga in this week’s Bates Motel? Will she be in the next episode? — Carol
Ausiello: Yes, indeed. Not only is she in Monday’s installment — which serves as the conclusion of the Marion Crane arc — but she and Freddie Highmore share one of their most electrifying and intense scenes to date in an hour that alternately pays homage to and boldly tweaks the Alfred Hitchcock classic.

Question: Will Emma and Regina sing together in Once Upon a Time‘s musical episode? —SwanQueenCreative
Ausiello: Hmm, it depends on what you mean by “together.” What we can say is that Regina, in the form of the Evil Queen, has a rousing solo in which she at one point slides on her knees à la Freddie Mercury. “The Queen has moves,” Lana Parrilla said with a smile during Matt Mitovich’s visit to the set. “She’s a rock star.”

Question: Anything on Hawaii Five-0? Isn’t it time for something shocking like a big death or a big plot twist? —Elizabeth via #AskAusielloLive
Ausiello: As suggested within our scoop on Julie Benz’s return, the Season 7 finale will revisit the human trafficking storyline that launched on March 10. “That episode was the emotional component of that arc, and the finale is the high-energy action component,” showrunner Peter M. Lenkov tells us. And by the time all the smoke has cleared, “There are a lot of little cliffhangers regarding some of our characters.”

This AAnd That…
♦ Elizabeth Perkins, Danny DeVito, Matt Damon and yours truly walk into a bar. That’s not the start of a joke. That really happened last night in Midtown Manhattan. Technically, we all walked in at different times and it wasn’t so much a bar as it was a speakeasy but my point is these are the kind of circles I’m traveling in these days.
♦ My colleague Dave Nemetz caught up with Mandy Moore at last week’s PaleyFest event for This Is Us, and the actress expressed hope that Kate’s season-ending vow to embrace her inner chanteuse means there’s a mother-daughter duet in her and co-star Chrissy Metz’ future. “I have my fingers crossed,” she said. “I can’t wait to do, like, a duet in prosthetics. That’s my dream this season: a karaoke duet with Chrissy. It’s a connection [the characters] have, and I hope that it’s something that can sort of bring them back together. I want to understand more of their disconnection, and what evolved in their relationship that they’re not as close as they once were.”
♦ If you participated in this week’s #AskAusielloLive, I am grateful for your service. If you didn’t, have no fear: We uploaded the latest episode to YouTube and embedded it below.