OK, OK, Thomas Lennon knows that taking on the Lethal Weapon role that Joe Pesci made famous is a big deal, OK? OK.

“And don’t think that wasn’t looming over me very heavily as I thought about whether or not to do this,” the Odd Couple star tells TVLine in advance of tonight’s guest appearance (Fox, 8/7c). “At least with Felix Unger” — his character on CBS’ reboot of the classic sitcom — “I was actually [the fifth], so that was a little less stressful.”

Still, Lennon says he couldn’t turn down the opportunity to put his spin on the character Pesci played in “one of the weirdest, most amazing movie performances ever,” as he puts it.

For those not in the know: Pesci’s Leo Getz made his debut in Lethal Weapon 2, where he was introduced as a federal witness Riggs and Murtagh are assigned to protect. The talkative, frenetic character returned for two more movies in the franchise.

Lennon’s Getz comes into the series as a lawyer who’s the target of a drug cartel; his appearance coincides with the return of Hilarie Burton’s DEA Agent Karen Palmer. Read on as Lennon previews the hour — as well as The Odd Couple‘s chances at renewal. 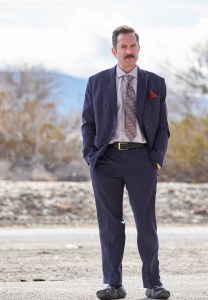 TVLINE | With Shakespeare, a million people have played all those different parts. But you are only the second person to play Leo Getz.
Luckily, the intention with the whole series was not to try to replicate anything. In fact, this Leo is an attorney with bus ads. It was actually written a little more custom tailored to my brand of weirdness I think, which is a little different. Joe Pesci has got an amazing, really fast, East Coast weirdness. I’ve got that creepy-eyed, Jeff Dahmer kind of weirdo. So my intention was to bring my own, very specific, energetic level of weirdness to this new incarnation.

TVLINE | The way you just put that, “energetic level of weirdness” also very much applies to Clayne Crawford’s portrayal of Riggs. I’m wondering how those two energies worked together when you were shooting.
I couldn’t have loved shooting scenes with those two guys more. Clayne – I didn’t really know him and on the very first day I went up and introduced myself to his stunt double, thinking his stunt double must have been the star of the show… I went up to the stunt double and said, “I’m such a big fan.” Then when I walked another 20 feet farther and I realized, “Oh, no. This is much more the on TV version of that guy. This must be Clayne.” So we hit it off.

The first scene where I’m with them together I’m sort of negotiating for something with them in the robbery / homicide division, and I request a bottle of water/ Clayne threw a plastic bottle of water at my head at what felt like 80-plus miles an hour. He was not prepared for me to catch it I don’t think, but it was one of the funniest things that’s happened to me on the set.

TVLINE | You mentioned that Leo is a lawyer. Can you tell me what brings him into the story?
Leo is attempting to negotiate a deal with the DEA for a member of the drug cartels. Subsequently, he is a witness or accessory — we don’t know — to a horrible bunch of murders. Riggs and Murtaugh then basically use him as bait to draw out, which he does not know for a little while. They basically take him out and try to get him assassinated.

TVLINE | The Getz character was so popular in the movies that he came back a few times. Have there been any discussions about you coming back to the show? Would you want to?
I most certainly would. It was a delightful job. Damon [Wayans] and Clayne and Keesha [Sharp] and everybody that I got to work with was just a delight. It was incredibly fun. The hours sucked, but it was really fun.
TVLINE | I would imagine it’s a little different from Odd Couple hours. Any word on that show’s chances?
I don’t know. I haven’t heard anything at all. The show is still hanging in there. It actually went up in the ratings [recently], but I don’t know anything at all.

TVLINE | How are you feeling about it?
From my gut, I would be a little bit surprised if it’s coming back. I think CBS wanted it to do slightly better than it’s been doing. That said, it’s doing like a 1 [rating] on Monday nights at 9:30, which is pretty late for that show, by the way… That said, I hate to speculate, but from my point of view it doesn’t seem a lot like it’s coming back.

TVLINE | I appreciate your candor.
By the way, at some point when you get into doing the things that I’ve done now for this long, you manage to make… you can’t let things break your heart. If you’re going to be an actor, forget it.