When will The Flash unmask Savitar? Does Once Upon a Time have another Oz-some episode planned? Is three a crowd for Supergirl sweethearts? Read on for answers to those questions plus teases from other shows.

When will we find out who Savitar is on The Flash? —Arlena
“Slowly, different characters are going to learn who Savitar is,” Danielle Panabaker shared during my visit to the set last week. “But I don’t know if the audience is going to be told anytime soon.” Grant Gustin meanwhile told me, “It’s not the same as past reveals,” explaining, “With Zoom and Reverse-Flash, the audience was starting to realize things before we all started to piece it together. But I don’t know how you would know this year. And when you do find out, it’s like, ‘Oh. My. God!’ There are really no secrets or hints leading up to to it.”

Will we see any more Wizard of Oz-inspired storylines on Once Upon a Time this season? —Angelo
Episode 18 is one to watch for, Angelo. “What I love about my episode — besides the fact that they’re ‘my episodes’ — is that they are like little mini Wizard of Oz movies,” a beaming Rebecca Mader told me on set last week. “The Wizard of Oz fans should be really happy, because we introduce the Tin Man for the first time (played recent Flash guest star Alex Desert), we get monkeys, and we’ll meet the [Cowardly] Lion as well. It’s a really, really cool episode for my character.” (Bex then sneaked me a peek of her solo from the musical episode, and it looks wonderfully wicked.)

My heart breaks for Once Upon a Time‘s Regina. What will she do now that Robin has let her down? —E.J.
I asked Lana Parrilla if Regina will blame herself for bringing the Wish Realm’s Robin of Locksley to Storybrooke, or if she will look sideways at Emma, who encouraged her to do so. “She blames herself to a degree,” Parrilla answered, “but she definitely blames another person — who I won’t mention.” 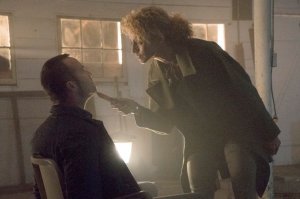 for new Blindspot scoop! Will we be seeing more interaction between Weller and Shepherd this season? —Erin
“Yes, you will be, and it’s hard-hitting,” Sullivan Stapleton said when I hand-delivered your question. “Shepherd has been observing him since he was young, paid his tuition…. With that link, you’re like, ‘What’s up, lady? What’s going on?’ That’s what I love about our writers, how they throw the twists and turns in every week. It’s a great story, and it’s personal for Weller.” Bonus scoop: Archie Panjabi tells me that when the show returns on Wednesday, March 22, “Somebody who has been an enemy of the team actually joins the team, and helps them in their search for Sandstorm.”

Can you tell us anything about Supergirl‘s “Sanvers”? —Emma
During my visit to that CW series’ set, Floriana Lima confirmed, “We’re definitely going to learn a bit more about Maggie and how she came out of that whole ‘coming out’ [experience].” What’s more, in the Monday, March 27 episode, “An ex-girlfriend (played by Cedar Cove‘s Hayley Sales) shows up, and it’s a shocking moment for Maggie to run into her — while Alex is with her,” Lima teased. “We are just walking outside of yoga class, and it was one of those moments where I was like, ‘Yeah, I’ve done that, run into an ex with a new partner!'” Scoop quiz: Now which half of “Sanvers” do you think is dragging the other to yoga?

Do you have any good Hawaii Five-0 scoop to share? —Belle
Being a red-blooded male, the return of Julie Benz is hella “good” in my book. Fresh off her Training Day Season 1 run, Benz will bring Abby back in Five-0‘s Season 7 finale — no, not to break up with Chin Ho (“That’s a long-term relationship, at least in our eyes,” says show boss Peter M. Lenkov) — but to help the team dismantle the human trafficking ring that they uncovered this past Friday. 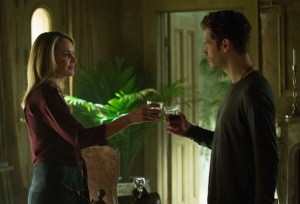 Klaus try to revive Camille? And will Elijah and Hayley have a happy ending? –Alex
I wouldn’t go throwing around words like “revive,” but the late, great Cami definitely has a presence in Season 4. In addition to a brief appearance — as teased in the official trailer — she’s mentioned more often in Friday’s premiere than certain other characters who are still alive. As for Elijah and Hayley, I can’t promise you a happy ending… but I can promise you a dramatic reunion.

I happen to think that Stef and Lena from The Fosters are one of the best married couples on television, despite their kids’ antics. I’d love to learn what’s coming up specifically for them. Any news? —JennR
“Tonight’s episode (airing at 8/7c on Freeform) culminates in a big, epic, romantic moment between Stef and Lena that is not to be missed,” executive producer Bradley Bredeweg teases.

Got any scoop on Grimm? —Jen
Friday’s episode spends a significant amount of time on the Nick/Eve relationship (or whatever you want to call it) and fills us in on the scary skull face we’ve been seeing in the mirrors. Lest the Nadalind fans feel left out, next week’s episode — the series’ penultimate hour — features an Adalind/Nick moment that feels very important as the NBC drama hurtles toward its conclusion.

When is Sarah Paulson going to show up on FEUD: Bette and Joan? —Payton
Ryan Murphy’s go-to award-winner appears as Geraldine Page in Episode 5, airing Sunday, April 2 and titled “And the Winner Is… (The Oscars of 1963).”

What’s coming up for Chicago Fire‘s Severide now that Anna is moving to Chicago? –Carlynn
After everything the two have been through — her leukemia, his anesthesia-free bone marrow donation — a little bliss is in order. “They start an epic romance that includes ice skating!” executive producer Derek Haas previews. 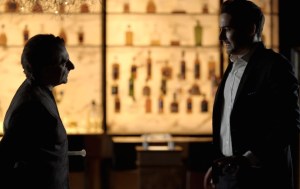 you have on Lucifer will do! —Addi
Regardless of what closed captioning might have assumed/told you, we are supposed to be wondering if Uriel cryptically told his brother, “The peace is here” or “The piece is here.” Stupid homonyms!

Can’t wait for iZombie to return. Got any scoop to get us through to April? —Chelle
The Flash and Supergirl aren’t the only ones showing off their pipes on The CW. During the first three episodes of iZombie‘s new season (pemiering Tuesday, April 4), David Anders’ Blaine sings not once, not twice, but three times! The first tune is a fun nod to musician-not-series creator Rob Thomas, while the other two are courtesy of Blaine’s new job.

Please tell me you have some S.H.I.E.L.D. scoop, this hiatus is interminable! — Serena
Until the bubble drama returns on Tuesday, April 4, all I can do is part with the few scraps left from my recent chat with showrunner Jed Whedon, who said that although we didn’t get a little vignette of his Framework life, “[Director] Mace would be in there somewhere” as Daisy gets to exploring, while “we might” see the return of some other familiar faces (a la Brett Dalton’s Ward). And with that, my cupboard of S.H.I.E.L.D. teasers is completely bare.

Real questions, real answers! If you need the Inside Line on a favorite show, email InsideLine@tvline.com! (With reporting by Andy Swift, Vlada Gelman and Kim Roots)