Dar Adal has been so blatantly evil this season on Homeland, he might as well cackle and pet a white cat in his lap after every scene. But this week, our heroes joined forces and began to move some chess pieces into place to topple Dr. Evil once and for all. 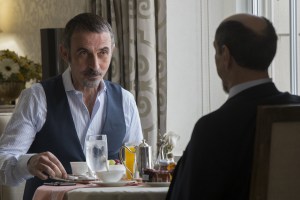 Keane tells Dar about Javadi’s insistence that Iran is cheating on the nuclear deal — and Dar has the nerve to act surprised! He suggests they hit Iran back hard with sanctions, and Keane agrees, even asking Dar for some suggestions for her new cabinet. It goes so well that Dar gloats to Javadi about how easily he was able to “move” her. Javadi plans to retire in style with a cool $45 million payout, but Dar has other plans for him: He brings in two Mossad heavies, who move in menacingly on Javadi. You f—ked up, Javadi; you trusted Dar Adal.

Javadi’s tricky, though, and he dials his cell phone so Carrie can overhear him yelling at Dar for double-crossing him. Carrie patches in Saul, and they trace the call to locate Javadi, but they’re too late; the Mossad guys have already hauled Javadi out in a laundry cart. Carrie finds Javadi’s phone, though, and on it, a video of him interrogating Farhad Nafisi — basically, proof that Javadi lied to Keane. They show it to Keane, and Carrie tells her Dar Adal orchestrated all of this, including the Sekou bombing. Keane is pissed: “That obsequious little s—t!” Then she turns to Carrie and Saul: “How do we shut him down?” (Yessss!)

But there might be some collateral damage involved in that: Keane brings in Carrie to meet her nominee to run the Department of Justice, and he says they don’t have enough evidence yet to prosecute Dar. They need Carrie to testify about what happened in Berlin last season — which would also implicate Saul. (Remember, he fell under the spell of that lying mole Allison Carr.) Carrie hesitates, but Keane assures her Saul would get a presidential pardon “down the line.” Well, that’s reassuring. 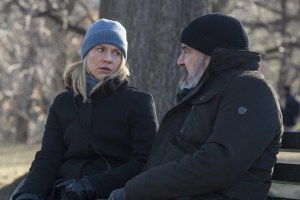 Carrie breaks the news to Saul, and he’s devastated: “My entire career will be wiped out.” She hits him back with, “Maybe you shouldn’t have been f–king a Russian mole.” His reply: “Coming from someone who f–ked a guy in a suicide vest, that means a lot.” (Touché!) Meanwhile, Keane meets with Dar, and lays on the charm so he doesn’t suspect anything. But he senses something is amiss, and instead of presenting her with his cabinet suggestions, he awkwardly brings up her dead soldier son Andrew. Yeah, she doesn’t like that one bit.

Dar returns home and pours himself a stiff drink… only he’s not alone. Quinn is waiting there for him, having evaded a pair of cops at the cabin and stolen a small army’s worth of guns and ammo from a gun store. Quinn wants to know why Dar set him up, waving a gun in his face: “You tried to kill me!” Dar talks him down, walking right up to the barrel of Quinn’s gun and saying: “I raised you. You are my child… I love you.” Quinn doesn’t shoot him… but he does smash Dar over the head with his gun and hobble off into the night.

RELATED Homeland Will Tackle the ‘Brody Question’ in Season 6

An injured Dar reaches for his phone and calls… Black-Hatted Guy! “What the f—k did you do?” he demands to know, and it’s clear Dar’s been employing this guy from the start. Back in his car, Quinn is listening in: He somehow bugged Dar’s phone, and he traces where BHG’s call is coming from. Once he gets a location, he fires up the engine and starts driving. Hold onto your (black) hats!

* In other news: Max infiltrated the shadowy corporation that Conlin was investigating before he was killed. Max applied for a job there — and O’Keefe, the ranting radio host, was the one to hire him. He was ushered to an underground bunker full of computer nerds, who all work on creating “sock puppets”: fake online profiles to push O’Keefe’s agenda of outrage through social media. Too real, Homeland!

* I’m not saying Quinn’s “grand theft ammo” pilfering of that gun store — he distracted everyone by rolling a Molotov cocktail under a truck in the parking lot — was hard to believe, but: A store with that much heavy weaponry really ought to invest in better security, don’t ya think?

* Encouraging news on the Franny front: Carrie’s meeting with a therapist went well enough that she’s been approved for a visit with her daughter. And wasn’t that opening scene with Carrie and the therapist — much of it an intense, no-edits close-up on Claire Danes, as Carrie explained her past with Brody and Quinn — heart-wrenching? More terrific work from Danes to bolster her Emmy case.

* Totally creeped out by Quinn propping up Astrid’s dead body on a couch in the cabin, Norma Bates-style — and then wiping some of her blood on his lip!

* That scene with Dar and the driver really summed up his sparkling personality, didn’t it? The poor driver just tried to make polite small talk, and Dar shut him down with: “Did I do anything, anything at all, to suggest that I was curious about the sound of your voice?” Forget the Department of Justice: This guy should be prosecuted by the Rude Police.