Quinn’s paranoid delusions land him in hot water this week on Homeland. (Actually, that water looks quite cold.)

At first, he’s humbled, apologizing to Astrid for going AWOL last week. But as soon as she heads out for a jog, he starts snooping around the cabin. In a drawer, he finds an envelope containing all of his pills, a wad of cash and a fake passport and IDs ready for him with the name “David Ekley.” Then he searches her car, finding a gun under the seat. He takes all the bullets out of the gun, puts the gun back and throws the bullets in the lake. (Yeah, we’ll want to circle back to that later.)

On a trip to the supermarket, Quinn helps himself to more free samples than he’s entitled to… before spotting Black-Hatted Guy inside the store! (He’s traded his black wool hat for a black baseball cap, but it’s definitely BHG.) Quinn watches him drive away in a truck, and sees that truck pulling into a roadside motel on the drive home. Back at the cabin, Quinn turns on Astrid, grabbing her roughly by the arm and asking why she’s helping him. She says because they’re friends. His response: “We f–ked each other because we were lonely. That doesn’t make us friends.” (Yowch.)

Then when Astrid tries to prevent him from leaving, he punches her in the stomach (!) and steals her keys, parking her car in the motel’s lot to stake out BHG. When he sees that truck pull in again, he grabs a tire iron and sneaks behind BHG, cracking him over the head when he opens his motel door. Only Quinn rolls the guy over… and it’s not BHG at all! Was this all just in his head? He retreats home, and finds Astrid packing to leave. He admits he followed the wrong guy, and pleads with her to stay. It looks like they’re about to reconcile, when… ping! A bullet whizzes through the window and hits Quinn in the chest.

It’s BHG, who’s sitting in the woods with a sniper rifle. (He was there!) Astrid runs to her car to get her gun — uh-oh — but when she tries to return fire, she has no bullets, and BHG shoots her dead. He chases a sobbing Quinn through the house and shoots Quinn again as he falls into the frigid lake. BHG then unloads another dozen bullets into the water, and waits a while to see if Quinn emerges. He doesn’t, and BHG walks away, satisfied that Quinn’s dead. But then!! Quinn comes up gasping for air. Of course he does. C’mon, BHG: Don’t you know that bullets just make this guy madder?

Let’s check out what else went down in “Alt.Truth”: 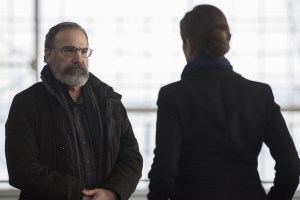 TRIPLE-CROSS | Saul has Javadi hiding out in a homeless shelter, and needs Carrie’s help in getting him in front of Keane. But she’s still deep in mourning about losing custody of Franny; she tells Saul she has no way to appeal, and they won’t even let her see Franny. So Saul pulls some strings and takes Carrie to the foster home where Franny’s staying. They park nearby and see Franny playing in the yard; Carrie tries to get closer, but Saul holds her back: “You’ll make this a hundred times worse.”

Now it’s Saul’s turn: He tells her the whole Nafisi/nuclear deal story, and asks her to arrange a Javadi/Keane meeting to prove to her Iran isn’t cheating on the deal. Carrie agrees, and she and Saul join Javadi and Keane for a clandestine meeting. Javadi tells Keane the nuclear deal is being undermined by the Israelis and the CIA, “whose concerns, I’m afraid, are valid.” Wait, what? He tells Keane that Iran is cheating and developing a parallel nuclear-weapons program with North Korea, despite Saul’s protests. He also warns her to “watch your back… because my country is not your friend.”

Carrie tries to tell Keane that Javadi is lying, but Keane, wondering why she ever trusted Carrie in the first place, leaves in a huff. Saul confronts Javadi, who apologizes, but says he had to lie “because I don’t want to spend the rest of my life looking over my shoulder.” That’s not good enough for Saul, but Javadi shoves him to the ground and drives off. When Carrie rushes to ask if he’s all right, Saul uncorks a classic response: “I’m not all right. I’m f–king miles away from all right.”

O’KEEFE’S BEEF | This week in “Dar Adal Is Unspeakably Evil”: That blustery radio host, Brett O’Keefe, is hosting a panel of soldiers who served with Keane’s son Andrew in Iraq. They’re all tarnishing him as a coward, with one detailing the mission where Andrew died: He says Andrew was running away from the battle when he was shot in the back by a sniper. Parroting O’Keefe’s words, the soldier calls Andrew “the opposite of a hero.”

Later, O’Keefe invites Dar Adal to watch some video he acquired from that soldier. It’s body-cam footage from that mission, and it shows that Andrew was actually running to help save lives when he was killed. But O’Keefe deceptively edits it into an anti-Keane attack ad, cutting the video so it looks like Andrew was abandoning his fellow soldiers and ending with “Cowardice: It Runs in the Family.” O’Keefe assures Dar he’s the only one with access to the full video… and Dar seems pleased. (Because he’s unspeakably evil!)

* This feels like the emotional low point for the season, doesn’t it? With all our heroes on the ropes, and things looking extremely dire? This is all just to set us up for a triumphant finale where Keane is sworn in just as Carrie reunites with Franny, Saul punches out Javadi, and Quinn strangles Dar Adal with his bare hands.

* So did BHG send a lookalike to the motel to throw Quinn off the scent? Or did Quinn’s delusional brain get the trucks mixed up? (And should we be worried about the poor sap who Quinn cracked in the skull with a tire iron?)

* Can’t forget Javadi casually mentioning good ol’ Nicholas Brody to Carrie. He told her he moved Brody’s remains to “the resting place of the martyrs,” a nice shady spot in a forest of pine trees. Will Carrie ever pay him a visit, you think?

* And seriously, isn’t Quinn on his tenth or eleventh life by now? The guy is like Jason freaking Voorhees at this point: just flat-out unkillable. The only things that will survive a nuclear holocaust? Cockroaches… and Peter Quinn.