Carrie lives out every mother’s nightmare this week on Homeland — and Claire Danes delivers her best performance of the season.

Carrie’s checking out the new security system Max installed when she gets a call from Franny’s school: A social worker from children’s services named Christine wants to talk to her about the Quinn standoff. When Carrie gets there, Christine tells her Franny was “traumatized” by the ordeal — and Carrie made it worse by bringing her home only a day later. Carrie offers to take Franny to live somewhere else for a while, but Christine believes the girl is at “imminent risk for further harm,” and so she’s taken Franny out of school and placed her in a group home.

Carrie, understandably, freaks the hell out when she hears this, ranting that this is “bulls—t.” (Which it is!) Back at Christine’s office, Carrie insists, “I am a good mother.” Christine asks her about Quinn, and why he was living there. Carrie starts to explain, but Christine says the VA told her Quinn suffers from rage and depression, with violent outbursts. Plus, Franny told her she didn’t feel safe with Quinn, and “thought she was going to die” during the standoff. This breaks Carrie’s heart; she sobs and asks what she can do. Christine says she’ll try to get her case before a judge tomorrow — but Carrie will need a lawyer.

Reda agrees to represent Carrie in family court. But it gets ugly there fast: Christine says Carrie’s parenting has been marred by “blind spots,” e.g. letting Quinn live with her. And it’s not just Quinn: She tells the court Franny woke up to find Carrie asleep on the floor, clutching a gun. Carrie says she was just defending herself and her child, but when the judge asks why the cops couldn’t protect her, she doesn’t have a good answer. Then Christine drops another bomb, telling the judge Carrie is bipolar and has been hospitalized twice. That’s enough to convince the judge: Franny will remain in foster care until the state deems the home safe. Carrie dissolves into tears, devastated.

Back at home, all alone, Carrie wanders around like a zombie, completely numb. She stares at Franny’s finger paintings taped on the fridge, then pulls out a gift-wrapped bottle of wine. After a glass (or three), a blubbering Carrie calls Keane, begging her to pull some strings to get Franny back home. Keane says she can’t do that, and can’t believe Carrie would even ask. Carrie screams: “My daughter is in some stranger’s house!” Then she says she thought Keane would understand: “You lost a child.” Oof. That’s a bridge too far for Keane, who hangs up on her.

Finally, we see Christine on her office phone, telling someone that Franny will be in foster care for the foreseeable future. It’s Dar Adal! She thanks him for providing all that background dirt about Quinn and Carrie. Damn you, Darth Adal!

Let’s see what other traumatic things went down in “Imminent Risk”: 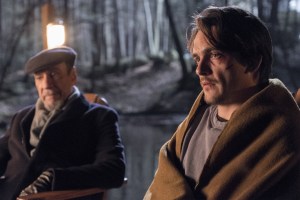 #QUINNING | Quinn wakes up in a strange room and looks out his window to see he’s in a cabin on a lake somewhere. Astrid comes in to tell him they’re in the “middle of nowhere.” He doesn’t like that too much, because next time we see him, he’s hobbling down a country road, trying to walk all the way back to Manhattan. Astrid catches up with him and waves off a driver who offers Quinn a ride. She tells him he needs to come back home: “That’s the deal.” What deal? “The deal Dar Adal made.” Oh, you don’t say?

Back at the cabin, Quinn sits staring out at the lake when Dar arrives. Dar tells him not to feel sorry for himself, and says Quinn’s resilience was the first thing he noticed about him as a kid. “Not the first thing,” Quinn sneers, calling Dar a “f–king dirty old man.” (What?! Did Dar molest a young Quinn?) Dar knows Quinn is trying to get back to help Carrie, and doesn’t understand his fascination with her. He twists the knife by telling Quinn when he was in that sarin-induced coma in Berlin, Carrie had the doctors wake him up to get information out of him, which may have led to him having a debilitating stroke. He leaves Quinn with a warning: If he messes up this last chance, “there won’t be another.” 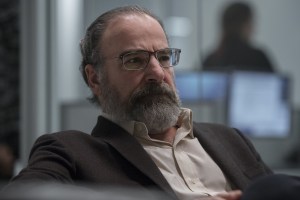 ‘NO LOOSE ENDS’ | Saul has arranged for his Iranian intelligence pal Majid Javadi to fly into America, and to meet him at a New York Islanders hockey game. But Dar Adal knows he’s in town, too, and arranges for someone to pick up Javadi at his posh hotel and take him to a not-so-posh interrogation room. While Javadi is accused of being a traitor and getting his fingernails pulled out (ouch), Saul is stuck at work explaining to the CIA what he was doing in the West Bank. They even want to search his phone to track his movements, which makes Saul very nervous.

But Dar arrives to “save the day,” letting Saul go — because he thinks Javadi is safely tucked away. Except an Iraqi named Amir frees Javadi by killing his captors; he remembers Javadi being kind to his family in Iraq. Amir goes to the Islanders game and pulls Saul out to meet Javadi in a dark alley. Javadi pulls a gun on Saul, asking who knew about their meeting in the West Bank. Saul says Dar did, but he doesn’t think he’s behind this. (Ha!) Javadi then shows Saul the bloodied body of Farhad Nafisi, and says Nafisi’s been working with Mossad; there’s no parallel nuclear program in North Korea. Saul invites Javadi to tell Keane just that.

Before they go, though, Javadi calls for Amir, who drove them to the alley — and shoots the guy right in the head. “No loose ends,” he tells a stunned Saul. Oh right… just remembered Javadi is not such a great guy after all.

* This really was some incredible acting from Danes, wasn’t it? She doesn’t have two Homeland Emmys on her mantel for nothing, people!

* But really, though: Dar Adal made sexual advances on Quinn when he was a kid? (Remember, Dar found Quinn as a teen in a foster home.) And Dar defends himself by saying he never forced himself on anyone? Man, that is dark… but it does add another (uncomfortable) angle to the Carrie-Saul-Dar-Quinn dynamic.

* Poor Franny. I hope she got to take some of her stuffed animals with her, at least.

* Did anyone else’s ears perk up when Amir confirmed he was with Javadi by telling Saul, “Greetings from Sergeant Brody”? Brody lives! (Not really. But kind of!)