Homeland‘s Peter Quinn may be a certified whack job, but he does seem to have stumbled upon a massive conspiracy — and this week, someone gets caught in the crossfire.

Carrie waits at the police station to see Quinn, after last week’s unpleasantness. But a cop tells her he’s been shipped off to Bellevue, and he’s on lockdown for the next 72 hours, so she can’t see him. But she does show Quinn’s photos of the Black-Hatted Guy and the Medina Medley vans to Conlin. He thinks Black-Hatted Guy must’ve been working with Sekou, but his informant doesn’t remember ever seeing Black-Hatted Guy: “Looks like government, man. Looks like you.” So Conlin starts to… believe Carrie? Welcome aboard the Carrie Mathison Crazy Train, Conlin!

Conlin shares with Carrie the one lead he could find on Black-Hatted Guy: The Jeep he drove was leased by a series of shell companies, linking back to a mysterious corporation in Virginia. Conlin goes down to check it out… and spots the Jeep in the building’s parking lot. He lies his way inside and tags along with a herd of job applicants, sneaking away to find a huge room of empty desks. When he gets caught, even his FBI badge doesn’t get him anywhere; he’s escorted out by security. And he notices the Jeep’s no longer parked outside. 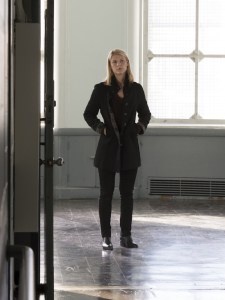 Meanwhile, Carrie finally gets in to see Quinn at Bellevue, and he’s in bad shape. Like, worse than usual: beaten up and bruised, cowering in a corner. Carrie tries to tell him he was right about the bad guys across the street, and asks if he remembers what Black-Hatted Guy did after the van photos. But Quinn just snarls at her: “You said, ‘Protect Franny’… and I did. Then you took me down.” He screams out, “You’re with them!” and even bites her on the hand before they drag him away. Good talk!

She heads to Conlin’s house to figure out their next move, but she finds the back door open… and a trail of blood on the floor. Conlin’s lying dead in his upstairs bathroom, clutching his gun. Then she hears someone downstairs closing the back door. It’s Black-Hatted Guy! She hides while he searches the place, then she grabs Conlin’s gun. Black-Hatted Guy is lying in wait for her downstairs, but she catches his reflection in a picture frame and runs out of there, peeling out in her car. She rushes to Franny’s school to make sure she’s OK, and gives her a big hug. (A “too tight” one, according to Franny.)

Max — hi, Max! — comes by to make sure Carrie’s house is safe, and promises to install a security system the next day. But Carrie’s still freaked out; she crouches in Franny’s bedroom while the little girl sleeps. And Quinn’s not doing much better: He’s strapped down to the bed at Bellevue when he hears strange noises. He looks up as two shadowy figures enter and shoot him full of a sedative. They unstrap him and move him to a gurney, rushing him out of the hospital into a waiting van. He opens his eyes to see a familiar face smiling down at him: “Hello, Peter.”

It’s Astrid! Remember her, the German intelligence officer (and ex-girlfriend of Quinn’s) from last season? Man, this season of Homeland is like an old sweater: You pull at one tiny thread, and it just keeps unraveling and unraveling… 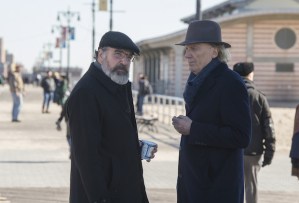 TO THE VIKTOR | Saul is briefed about the bombing at the CIA, but he’d rather know what that Mossad agent Tova has been up to. He gets stonewalled, and a young agent named Nate tells him off the record that Tova’s “off the leash” — i.e., not to be tracked. So Saul sets up a clandestine meeting on the Coney Island pier with Viktor, an ally in Russian intelligence, to ask what Russia knows about Tova’s movements. Viktor asks why the CIA can’t help him; Saul chalks it up to a “technical glitch.”

Later, Viktor reports back that Tova’s been “a very busy girl,” with five trips between Tel Aviv and Abu Dhabi. Oh, and one other trip: He shows Saul photos of that meeting Dar Adal had with Tova in the premiere. Viktor notes that this must mean Saul is “on the outside, looking in.” Watch your back, Darth Adal: Saul Berenson does not enjoy being kept out of the loop. 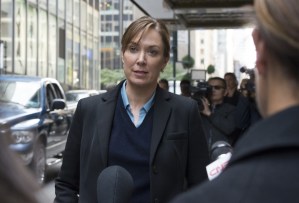 ESCAPE TO NEW YORK | Keane is still stuck in that country house, and she’s getting frustrated: The current president can give an anti-terrorism speech in Lower Manhattan, but she’s not allowed to budge for “safety” reasons. She asks if she can at least get her chief of staff, Rob, up to the house, since she can’t reach him on that phone Dar gave her. After a lot of hassle, Rob does finally make it up to the house — but by the time he gets there, Keane is gone!

She sneaks out with the help of that older lady who lives in the house; the lady admits, “I’ve never voted for you,” but “I know what’s right.” When Keane asks why she didn’t get the lady’s vote, they get into a (surprisingly civil!) political debate. The lady’s son was a Marine who died overseas, like Keane’s son did, and she feels like Keane dishonored her son’s memory by not talking about him on the campaign trail. That inspires Keane, and when they arrive in New York, Keane invokes her son’s sacrifice to defend her stance on terrorism. Yay for polite political disagreement!

* Here’s what I think we know about that mysterious corporation Conlin was investigating: They’re in the private sector; they’re hiring a bunch of ex-government people with security clearances; and they’re handling the world’s largest fiber-optic stream — “all that data they won’t let us touch,” according to a job applicant. We didn’t need to know, though, that the place gives that applicant “an information throbber.” Gross.

* One thing that’s been bugging me this season: We, as viewers, know that Sekou didn’t plant that bomb. But the other characters, even Carrie, are way behind us on this, and we’re left waiting for them to catch up. Very slowly.

* But my main complaint with this week’s episode, really: not enough cute Franny.

Got theories about who Black-Hatted Guy is working for? Drop your post-Homeland thoughts in a comment below.