You’d think last week’s shocking van explosion would be Carrie’s main priority this week on Homeland. But instead, another ticking time bomb took precedence in an intense nail-biter of an episode.

During a news alert about Sekou’s van exploding — two people were killed, including Sekou, with six more injured — Quinn notices that a fragment of Sekou’s blasted van says “Medina Medley.” (Remember, he saw Black-Hatted Guy from across the street enter a parking lot full of Medina Medley vans.) Reda calls Carrie and tells her she needs to get over to Sekou’s place; his mom and sister are being interrogated by the FBI. Franny’s nanny Latisha won’t arrive for a while, so Carrie asks Quinn to watch her in the meantime. And if that sounds like a bad idea to you… well, you’re not wrong.

While Carrie’s gone, Franny tries to play cute games with Quinn, but he’s distracted by all the news vans camped outside. A female reporter knocks on the door, asking about Carrie’s connection to the “suicide bomber,” and Quinn shoos her away. Latisha finally arrives, but the press still won’t go away, and that same female reporter starts knocking on the back door. So Quinn violently yanks her inside, drags her through the house and pushes her down the front stairs. And when the nanny suggests she take Franny to her house and offers to call Carrie, Quinn responds by taking her cell phone and removing the SIM card. OK, then. 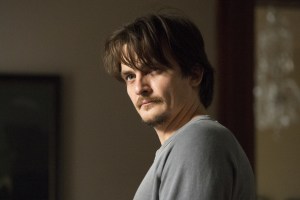 Things boil over when a crowd of protesters gathers outside Carrie’s house and one flings a rock through the window. Quinn calmly fetches his pistol — and shoots the protestor in the shoulder. The crowd scatters in terror, and Latisha pleads with Quinn to let them leave, but he stuffs her and Franny in the basement bathroom and hunkers down. Carrie arrives home to a swarm of police activity on her block, with the news calling it a “hostage situation.” Despite Carrie’s protests, the cops send in a SWAT unit — but Quinn captures a SWAT member and gets the rest to back off. Alright, now it’s a hostage situation!

While Quinn disarms the SWAT member, Carrie convinces the cops to let her talk to Quinn. She goes to the basement window and pleads with him, apologizing for leaving him alone with Franny. He lets her inside… but he has the SWAT guy tied up with duct tape across his mouth. She comforts a scared Franny, telling her it’s all “a huge misunderstanding,” but Quinn is ranting and raving, saying, “They know too much. They’ll never let us go.” And the cops, using the captured SWAT guy’s body cam to see inside, decide to go in again.

Carrie tries to tell Quinn he’s “not seeing straight,” but he insists the cops are connected to the bad guys across the street. “I have proof,” he says, holding up his phone. But just then, the cops burst in. Carrie knocks Quinn to the ground, lying on top of him and yelling at them not to shoot as they point their laser sights at him. They take Quinn away unharmed, while Carrie comforts a scared Franny. Man, that could’ve gone a lot worse, right?

But while Carrie’s packing up Franny’s stuff to spend the night at Latisha’s, she sees Quinn’s phone on the ground. She flips through his photos, and sees the Black-Hatted Guy… and the Medina Medley vans. A chill runs through her, and she peers out across the street to see a window with a light on. As she stares at it, the light suddenly goes out. Hmmm… maybe Quinn was seeing straight after all?

Let’s check out what else is going on in “Casus Belli”:

SECRET ADMIRER | Carrie heads to Sekou’s apartment and finds his mother in tears. Conlin is hammering Sekou’s sister with questions, and accuses Sekou of blowing himself up. He’s furious with Carrie for getting him out of jail, and thinks another attack is imminent. He wants to know who got her that recording of Conlin and the informant. She refuses to say… but then she makes a beeline for that NSA guy she ambushed a few weeks back.

She tells NSA Guy what happened with Sekou, and he freaks out that she actually helped get the “bomber” out of jail. She promises not to say he was involved… but he says he actually wasn’t involved. In fact, he ratted her out to his superiors. So who sent Carrie that bouquet of flowers with the flash drive in it, if he didn’t? Carrie tells Conlin it must’ve been a “third party” who wanted Sekou free. Maybe so they could then kill him? 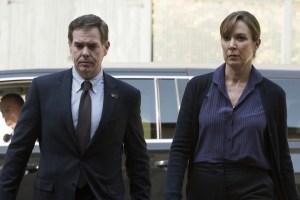 NOT EASY BEING KEANE | President-elect Keane is getting loud criticism from a blustery, Alex Jones-type radio host, who blames the van bombing on her soft stance on terrorism. Agents hustle her out of her Manhattan hotel into a helicopter, which whisks Keane away to a secure location where she has no phone and no contact with her staff. She does get a visit from Dar Adal, who gives her a secure phone — but also tells her the feds had Sekou in custody, but Carrie helped him get out. “This was a man who hated the U.S. government,” Dar says, adding ominously that Keane’s hotel may have been his intended target.

Dar then picks up Saul from the airport, telling him the bombing has made Keane “a little more open” to his way of thinking. Saul recounts his run-in with Etai Luskin, and something he noticed when interrogating that Iranian operative Farhad Nafisi. Remember that cigarette pack in the trash can? Saul says it was in a room that Nafisi never set foot in — at least not while Saul was there. He thinks Mossad operatives prepped Nafisi ahead of time, telling him what to say to Saul. But he expects to get the truth about Iran soon from Majid Javadi.

Keane tries to use the phone Dar gave her, but she can’t get through to her chief of staff, Rob. And then the phone cuts out completely. She tries to get a signal, but she ends up in an upstairs room of the home she’s staying in, where an old woman is watching that talk-radio host — and he’s still unloading on Keane.

* “Casus belli” is Latin for “an act or situation that provokes or justifies war.” Well, we’re certainly at war here — on a few different fronts.

* Speaking of justification: Didn’t the cops seem insanely aggressive in the Quinn standoff? Sending armed gunmen into a hostage situation without any attempt at negotiation, or any idea what’s actually going on inside? Sure, Quinn taking the SWAT guy hostage justified a tough response, but before that? I’ve seen low-speed highway chases that lasted longer than that standoff.

* That radio host was the same one Quinn was listening to earlier this season, right? With his wild conspiracy theories about the Zika virus and whatnot?

* Another week, another series of cute moments with Franny! My favorite: her introducing Quinn to all of her stuffed animals and asking him, “Do you like rabbits?” (C’mon, who doesn’t like rabbits?) Her “one potato, two potato” game on the stairs was pretty adorable, too.

* Maybe I’m just paranoid… but is anyone else wary of Latisha the nanny and her husband? They carted Franny off to their place, without Carrie. And we know someone is secretly keeping an eye on Carrie and Quinn. Could they be deadly sleeper agents? Or is this show just making me as crazy as Quinn staring at a window?

What’s going to happen to Quinn now? And who sent Carrie that recording? Hit the comments with your post-Homeland thoughts.