Well, if you’ve been feeling like this season of Homeland has started out a little slow… this week’s episode certainly ends with a bang.

Sekou gets released from prison — which means Carrie’s crazy blackmail ploy worked! She and Reda tell Sekou the only condition of his release is that he not talk to anyone about the case. He seems to go along with it: “I’m out, aren’t I?” But at a welcome-home party, a couple of buddies think he sold out the cause and jokingly check him for a wire. That makes Sekou mad enough to put his kufi cap back on and record a new video insisting he’s no snitch, and that he’ll always protect his Muslim brothers and sisters. 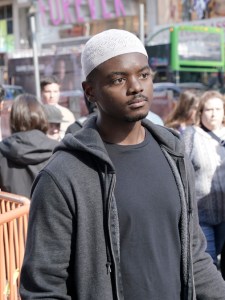 Carrie later gets a call from Reda: Sekou has posted more videos, and they could land him back in jail. So Carrie pays Sekou a visit and asks him to take those videos down. She and Sekou then get into a philosophical debate about the war on terror, with her wanting to know why he posts “ugly” things like dead American soldiers, and him saying it’s necessary to wake people up. She tells him she’s lost some friends in this war (again, RIP, Brody) and she wanted to help free Sekou “because this whole country went stupid crazy after 9/11, and no one knows that better than I do.” Good scene!

She apparently convinces Sekou, because the next day, when he goes back to work as a delivery-van driver, he’s taken the videos down. His buddies question him about it — and they might not be joking anymore — but Sekou shrugs it off, saying, “You gotta choose your battles.” Someone may have chosen a battle with him, though: As he steers his delivery van through Manhattan, boom! The van explodes, killing Sekou and sending an all-too-familiar plume of smoke floating above the city. But a season of Homeland doesn’t really start until something blows up, right?

So who planted the bomb? We get a clue from (of all people) Quinn, who’s still paranoid about the building across the street. He takes photos of a black-hatted guy emerging from the building, and even breaks into the guy’s apartment to investigate further. Carrie brushes off his concerns, but Quinn grabs her car keys the night before the van explosion and follows Black-Hatted Guy as he drives off. He sees Black-Hatted Guy enter a parking lot full of vans with “Medina Medley” printed on the side… the same kind of van Sekou was driving.

Let’s take a look at what else went down in “A Flash of Light”: 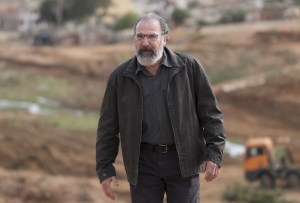 OLD FRENEMIES | Saul’s still in the back of that police cruiser in the West Bank when it takes a sharp turn and he’s suddenly kidnapped, stuffed in a van and blindfolded. But don’t worry: It’s a clandestine meeting he set up with… Majid Javadi! Remember him? He’s the Iranian intelligence agent from Season 3 who masterminded the Langley bombing, and who Saul sent back to Iran as a double-agent. Saul asks him if the Iranians are running a covert nuclear program. Javadi claims not to know; he’ll ask around, but he warns Saul, “The news might not be so good.”

When Saul gets back to his sister’s house, she wants to know where he’s been, and is angry he used her as a cover for work. But as Saul prepares to catch a plane home, he’s visited by… Etai Luskin. (What is this, Ghosts of Seasons Past?) He’s that Israeli ambassador from last season, and he also wants to know what Saul was up to last night. His sister lies and says he was home all night, but Etai still wants to give Saul a ride to the airport.

In the car, Saul says he’d love to stay and chat, but he has to get back to the U.S. Etai tells him there’s no need to rush: “Your flight has been cancelled.” Uh-oh. He takes Saul to a secure location and places him in a sparse room with a cot and a desk, telling him Mossad operative Tova will be there in the morning: “You f–k with us, we f–k with you.” But later, he comes to tell Saul he can go home after all: “There’s been an attack in New York.” Is this just a temporary reprieve, though? 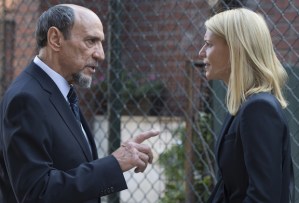 WICKED LEAKS | Dar Adal is being so blatantly villainous this season, I want to call him Darth Adal. He sabotages Keane’s press conference by leaking word to the press that she’s “willfully ignoring” proof of Iran’s nuclear cheating. She confronts him, demanding to see Saul’s full report from Abu Dhabi. Then she turns to Carrie and asks if she has any dirt on Dar they can “leverage” against him. Playing dirty before she even gets into the White House… I like it!

Carrie keeps her lips shut, staying loyal to the CIA (and Saul), but that doesn’t stop Dar from dropping by Franny’s school for a chat. He says he knows Carrie’s been advising Keane, and curtly tells her to “stand down.” But she fires back: “You stand down!” Dar drops a not-so-veiled threat on her: “I don’t think you understand how vulnerable you are.” She comes right back with: “I don’t think you do.” Cue the Carrie Mathison trademark chin-tremble. A Carrie vs. Dar war is definitely brewing here… and I can’t wait to see how it plays out.

* This Week in Franny Cuteness: How adorable was it when she saw Quinn at home and declared, “It’s snack time”? Plus, I loved her description of Dar Adal as “a man with painted hair.” Even Darth himself had nice things to say about the girl: “What a great child. Striking hair.”

* Black-Hatted Guy did spot Quinn in the lobby of his building, and threatened to call the police. Will that slip-up come back to bite Quinn?

* We still don’t know what’s up with Farhad Nafisi and that cigarette pack of his. But it was featured prominently in the “previously on”s, so it must mean something.

* When Reda questions the shady methods Carrie used to get Sekou out of jail, she promises nothing like that will ever happen again. To quote the immortal Wayne Campbell: “Shyeah! Right!”

Got thoughts on tonight’s explosive Homeland? Share ’em in the comments.