Quinn had me worried after the first couple episodes of Homeland‘s sixth season… and now I’m just terrified.

Sunday’s episode opens with a long-overdue sight: Quinn getting into the shower! (About time, smelly!) Only when he turns on the water, sarin gas comes out. Nope, it’s just a nightmare, one that Quinn wakes up from screaming bloody murder. Carrie runs downstairs to comfort him, and they share a long embrace. So long, in fact, that Quinn gets the wrong idea and starts lifting up her shirt. Carrie puts a swift stop to that, though, and asks if she needs to call Max to look after him. “I don’t need a babysitter,” Quinn grumbles.

But he clearly does need some kind of help: We see him staring out at the street and eyeing suspicious silhouettes in nearby buildings. Is he just seeing things? Or is he really being followed? He does emerge from his basement lair to meet that druggie girl from the premiere; he wants to see her boyfriend Tommy, who knocked Quinn out and stole his money. She reluctantly drops him off at Tommy’s place, where Quinn offers to buy Tommy’s handgun. They agree to two thousand dollars… but then Quinn flips a table and whacks Tommy over the head, taking the gun and informing him that the two thousand Tommy stole from him means they’re even.

It’s admittedly nice to see Quinn strong enough to stand up for himself again. But things get a little grim when we see him lurking in the basement doorway, hiding from Carrie and staring at those silhouettes in the window again. And now he has a gun. Will Quinn’s imaginary enemies lead to real-life carnage? Let’s just hope our precious Franny is nowhere near any of this mess.

Let’s run down the other highlights from “The Covenant”: 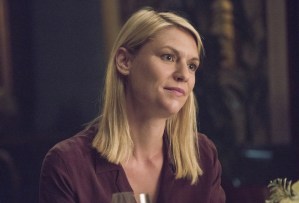 ‘I’M SORRY. I F—KED UP’ | Oh, if we had a dollar for every time Carrie Mathison said that. (We could fund our own covert nuclear-weapons program!) This time, it’s because of her little visit last week with the FBI informant who set up Sekou. Reda tells her the informant ran to the feds, and now they’re pulling Sekou’s plea deal off the table. He’s looking at 15 years in supermax. And Reda’s pissed that she violated a court order: “This isn’t the arrangement we had.” Carrie apologizes, and insists on being the one to break the bad news to Sekou.

At first, Sekou seems OK with it: “I wasn’t interested in their offer anyway.” But after Carrie explains it further, the truth sinks in, and he angrily unloads on her: “How could you do this to me?” Wracked with guilt, Carrie tracks down a guy named Roger who must work for the NSA, because she asks him for the transcript of any calls between Conlin and the informant. He doesn’t want to get involved, but later, Carrie receives flowers at work, and instead of a card attached, there’s a flash drive.

On the flash drive: audio of a phone call between Conlin and the informant, where Conlin’s clearly pushing the informant to set up Sekou. Carrie takes the smoking gun straight to Conlin, who laughs her off: “You’re really something.” (She sure is!) He says the recording won’t hold up, but Carrie demands that he drop all charges against Sekou and set him free or she’s sending that audio to the attorney general. She leaves Conlin’s office with a smug smile on her face… but as with many of Carrie’s temporary victories, I have a bad feeling about this. 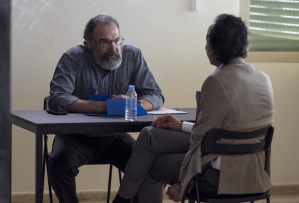 HEY, SAUL SISTER! | Meanwhile, Saul is in Abu Dhabi, following up on Dar Adal’s tip about Iran running a secret nuclear-weapons program. He tricks Iranian operative Farhad Nafisi into a meeting and tries to blackmail him into spilling Iran’s nuclear plans. Saul knows Nafisi has a $120 million line of credit at a foreign bank and accessed half of that this week. But Nafisi insists it’s for a perfectly legal delivery of Russian anti-aircraft equipment. And he says Iran doesn’t even want nuclear weapons; they only started their program to use as a bargaining chip so the U.S. would lift sanctions.

Saul phones Dar Adal and tells him the situation is “complicated,” and he seems truly conflicted on whether Nafisi’s lying or not. (He also spots an empty pack of cigarettes in the trash that seems to get his mind whirring.) But Dar Adal turns around and tells President-elect Keane that Saul said there’s “conclusive” evidence of a secret Iran program. (No, he didn’t! You’re a damn liar, Dar Adal!) Keane wants to take action, but she’s not president yet… and she and Dar don’t exactly trust each other. For good reason.

Since he’s already in the Middle East, Saul swings by the West Bank to visit his sister. They seem cordial, reminiscing about their childhood in Indiana. But they lost touch when she married a militant Israeli who clashed with Saul. And she and Saul get into a heated debate over Middle East policy. He says she’s keeping Palestinians from their rightful home. She says she has “a life filled with faith and purpose. What do you have?” He has… a nice beard!

And he also has a plan up his sleeve, because we see him leave his sister’s house in the dead of night and get in the back of a cop car. He hunches down in the back as the driver tells him to “get down.” Back in the U.S., Carrie has her own secret rendezvous with Keane in the back room of a restaurant. Keane tells her what Dar Adal said about Saul’s “conclusive” report. Carrie can’t believe Saul would be so definitive; intelligence officers usually hedge their bets. She tells Keane to confer with the current president before making any decisions. And all the while, Dar Adal is listening in on their conversation. Did he bug Keane’s phone? One more time: Damn you, Dar Adal!

* This is not a drill: We actually got opening credits this week, people! Dissonant free-jazz music, shots of protests around the world and Carrie walking the streets of New York, and a narrator telling us “the revolution will not be televised.” Welcome back, Homeland opening credits. We missed you. 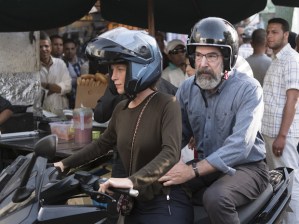 * When I first saw this photo of Saul on a moped, I was hoping for an exciting chase scene with Saul clinging to a woman’s back while zipping through the alleys of Abu Dhabi. Alas, it was just a ten-second scene. A real missed opportunity there.

* So what did Saul realize when he saw Nafisi’s empty cigarette pack in the trash? Did Nafisi steal evidence from Saul’s case file?

* Saul told his sister he hasn’t been with anyone since splitting up with Mira. But wasn’t he sleeping with that traitor Allison Carr last season? Guess that’s still kind of a sore spot for Saul.

* Did anyone else notice that Carrie turned down wine during her meeting with Keane? Wow… this truly is a new season.

Are you scared of what Quinn might be capable of? And what’s Saul endgame in the Middle East? Hit the comments with your theories.