Carrie’s friendship with Saul Berenson has always been Homeland‘s bedrock relationship. (Even when they’re yelling at each other.) But this week’s episode found Carrie in an unusual position: lying to Saul’s face, in order to cover up her alliance with the newly elected president.

Carrie and Saul share their first Season 6 scene together when he comes calling at her new office. They hug, and things seem warm between them… until Saul accuses Carrie of secretly advising the president-elect: “I think her entire national security platform came out of that head of yours.” Carrie denies it, and says this is the kind of “bulls–t” that made her leave the CIA. She asks her old friend to leave.

But later, we see Carrie get in the back of an SUV and arrive at a top-secret location. Turns out she’s meeting… President-elect Keane! Carrie has been advising her, and tells her about Saul’s little visit. And when Keane’s chief of staff Rob shares Dar Adal’s request for some help investigating a snag in the Iran nuclear deal, Carrie recommends someone “absolutely trustworthy” for the job. No, not her. Saul. Carrie tells Keane that Saul wants the deal to work: “You can trust him.”

Can Saul trust anyone, though? He meets with Dar Adal and tells him he’s been requested to represent the U.S. in the Iran nuclear deal situation. He also tells him he met with Carrie, and he believes her when she says she’s not involved with Keane. But Dar Adal doesn’t have the same warm feelings towards Carrie. “She’s a menace,” he seethes. And Dar Adal has photos of Carrie entering that meeting with Keane… but he doesn’t tell Saul about them. So what nefarious plan does he have up his sleeve?

Let’s check in on the other plotlines in “The Man in the Basement”: 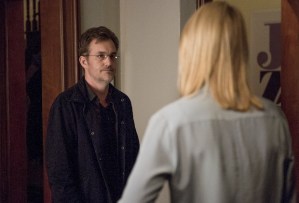 SEARCH & SEIZURE | Quinn’s in even worse shape this week, if that’s possible. He’s holed up in Carrie’s basement, listening to some conspiracy nut rant on the radio about Hepatitis C and the Zika virus. And when Carrie tries to get him to take his medication, he flings a coffee mug at her. Luckily, our old pal Max (hi, Max!) shows up to help out. He also tries to get Quinn to take one particular pill, or he’ll have a seizure, but Quinn ignores him, too. Then when Max is busy on the phone, Quinn goes AWOL.

Max tracks him down at a deli, buying a case of Budweiser. But before they can leave, Quinn suffers a serious seizure, convulsing and falling to the ground. When he regains consciousness, an EMT wants to take him to the hospital and do an EKG. But Quinn refuses (of course) and has Max take him home, begging him, “Don’t tell Carrie.”

Carrie comes home, and Max tells her about the seizure anyway, adding, “He’s got this weird thing about you.” She goes downstairs and finds a bewildered Quinn asking what happened to him. He doesn’t mean today, but in general. She tells him about the sarin-gas poisoning from last season, but he doesn’t remember, so they watch a video of it. Carrie says, “I must have watched it a hundred times… looking for some clue.” She points out the floor tiles in the video that led her to him.

Quinn seems to understand: “But you saved me.” Carrie says yes… but then Quinn asks why. And that question hits Carrie like a dagger to the heart. Chin trembling, she repeats his question: “Why? Why?” She doesn’t answer him, but she tenderly touches her hand to his chest and walks back upstairs, only to cry some more when she’s alone. Seems like they have a weird thing about each other, huh? 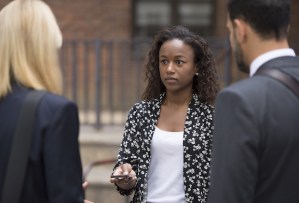 ‘WHEN DO I GO HOME?’ | Unfortunately for Sekou, the answer to that question is “not for a good long while.” Carrie and her Muslim-advocacy colleague Reda visit Sekou in jail, and want to know about the five grand in cash Conlin found under his mattress. Sekou says it was a loan, to fly his family to Nigeria to see his deported dad. Who loaned him the money? His friend who was helping him make those terrorist-promoting videos.

This all sounds pretty fishy… and gets even fishier when Sekou’s sister Simone reveals she was dating Sekou’s friend. Max runs the friend’s photo through a database and finds him under another name: He’s a federal informant who ratted out some gang members in Pittsburgh. Carrie confronts Conlin about this and wants to put the friend on the witness stand. But Conlin threatens her to stay away from the informant, or else she’ll be arrested. You think that’ll stop her? Then you don’t know Carrie Mathison.

Simone lures the informant into a meeting, and then Carrie jumps out and tells him, “We know who you are.” He plays dumb and tries to walk away, but then he caves: “I f—ked up in Pittsburgh.” He admits to helping Conlin and pushing the money on Sekou, but he told Conlin that Sekou’s not a terrorist. He doesn’t appreciate Carrie’s approach, though: “You f—ked up by coming here.” How badly did she f—k up? We’ll find out soon enough.

* Just to clear up what’s going on with the Iran nuclear deal: According to Dar Adal, Iran is cheating and running a parallel nuclear program in another country. An Iranian “bag man” named Farhad Nafisi met with nuclear scientists in North Korea. The Israelis want to question Nafisi in Abu Dhabi. That’s where Saul comes in.

* Funniest moment: that scene when Quinn is buying beer in the deli, and Max walks in. The cashier asks him to pay, and Quinn motions to Max and says, “Speak with my business manager.”

* Reda does manage to get a plea deal offer for Sekou: seven years. It’s understandable why Sekou rejects that — especially if he really is innocent — but it also could be the best offer he’s likely to get. Like Reda says, “Insist on a trial, and you’ll spend twice as long in jail.”

* Franny continues to be the cutest, with her stick-figure drawing and her cheerful declaration to her friend’s mom: “There’s a man in our basement!” I swear, Homeland, if you do anything to harm a hair on that precious girl’s head…

* At his meeting with Keane’s chief of staff, Dar Adal tells him he was in that same restaurant on 9/11, pulling choking people off the streets to safety. But later, Saul asks Dar, “Still telling that bulls–t story?” Dar replies, “Only when I have to.” Man… there’s a special place in hell for people who lie about things like that. But then again, it is Dar Adal… so we probably shouldn’t be surprised.

Is Carrie playing with fire by lying to Saul about Keane? And will she regret ambushing that informant? Hit the comments and share your thoughts.