After getting dosed with a chemical weapon last season and falling into a coma, Quinn somehow miraculously survived. (He is one tough cookie, after all.) But though he’s recovering in a VA hospital in New York City, Carrie discovers he’s not showing up for physical therapy like he should. When she does track him down, he looks terrible: weak, bleary-eyed and unshaven. She nags him to go back to therapy, but he doesn’t want to: “I’m not getting any better.” And even his nurses think Carrie’s visits are doing more harm than good, so she gives him some space.

Bad idea, though: Quinn’s hooked on drugs, as we find out when a hospital staffer helps him sneak out to a drug den, where he smokes meth, hangs out with some sketchy girls and gets robbed by a male friend of theirs. (That’s how we know Quinn’s sick: A healthy Quinn would’ve beaten the hell out of that robber guy.) Carrie eventually finds him, looking half-dead, but he doesn’t want to go back to the VA: “I’m fine on my own… I’ll figure something out.”

Carrie, wisely, doesn’t accept that and marches him back to the hospital. But after an ugly incident where Quinn tries to bolt and is aggressively subdued by hospital workers, she decides to take him in. He’ll live in the apartment below her and Franny in her Brooklyn brownstone, on the condition that he not bring any drug addicts down there. (Carrie has one other request for Quinn: Take a shower.) Later, Quinn tries to leave the apartment… but finds that Carrie’s locked him in. She loves you, man; she just doesn’t quite trust you right now.

Let’s see what else went down in “Fair Game”: 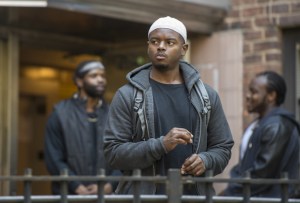 TERROR-VISION | Carrie’s new job is protecting the rights of Muslim-Americans, and she gets a fresh assignment in Sekou (Quantico‘s J. Mallory McCree), a young black man and devout Muslim living in the NYC projects. With a friend’s help, Sekou films videos at spots around the city where terrorist attacks have occurred, providing a history lesson… and a clear anti-American message. (“There are two sides to every story,” he says in one video. “Know that.”) You think these videos might attract the attention of the feds? Uh, yeah, probably!

In fact, the feds — led by Special Agent Ray Conlin, played by Nurse Jackie‘s Dominic Fumusa — bust down the door of Sekou’s apartment, scaring the hell out of his mom and sister and leading him away in handcuffs. He’s charged with offering material support to terrorists; Conlin tells Sekou’s mom, “Your son has been radicalized by some very bad people.”

We learn that Sekou’s dad was deported as a terrorist following 9/11… but has he really done anything wrong? Carrie and a law-professor colleague visit Sekou in prison, where he defends his videos as free speech. Carrie agrees, and confronts Conlin at a press conference, telling him, “What I saw was an angry kid, at worst.” But Conlin informs her that when they searched Sekou’s apartment, they found a plane ticket to Nigeria and five grand in cash. Is he planning something much worse than an angry YouTube video? 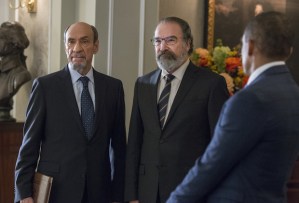 HAIL TO THE (LADY) CHIEF | Meanwhile, we have to check in on Saul Berenson, right? He and Dar Adal meet with the newly elected female president — oops! — Elizabeth Keane, played by House of Cards alum Elizabeth Marvel. They’re ready to brief her on the CIA’s covert operations, but she surprises them with her anti-war tone. She asks them about possible U.S. military action in Syria: “If the war isn’t winnable, what are we doing there?” And she wants to know all about the agency’s “lethal programs,” including drone and military operations.

Later, over drinks, Dar Adal shares his theory: Keane’s son was killed in Iraq, and he’s worried that she blames the CIA for his death. (“I think she despises us.”) Saul remains hopeful… but Dar Adal isn’t one for optimism. He secretly plots with a woman from the Israeli government to act fast before Keane is inaugurated, and then has an ominous closed-door meeting with a U.S. senator. Dar asks the senator if Saul’s coming; the senator says no. “Probably for the best,” Dar says.

* On the bright side: Franny looks healthy and happy! Brooklyn seems to agree with her, and Carrie’s lined up a good nanny, it looks like. Let’s just hope Quinn doesn’t bring around any drug-addled skanks to give the poor girl any (more) psychological scars.

* German billionaire Otto Düring is back… and still wants to make Carrie his bride. Carrie pushes him away, but he encourages her to find someone to share her life with: “If it’s not me, Carrie… let it be someone else.” Maybe she should give him a shot? Let’s be real: Carrie’s choices in men haven’t been the best, historically. (RIP, Brody.)

* Hey, no surreal free-jazz opening credits! At least not this week. But we did get a lazy-sax accompaniment to the opening scene, with Carrie on the bus.

* That shot of Keane opening a locket: There’s a picture of her son in there, right? We didn’t see it, so we can’t be sure… but it looks like Dar Adal’s worst fears about the new president might actually be true.

What did you think of the Homeland premiere? Grade it in our poll below, then hit the comments and share your thoughts.